Alexandre Bissonnette, who pleaded guilty to killing six men at a Quebec City mosque two years ago, will be allowed to ask for parole at age 67, a judge decided Friday.

Alexandre Bissonnette, who pleaded guilty to killing six men at a Quebec City mosque two years ago, will be allowed to ask for parole at the age of 67, a judge decided Friday.

Bissonnette, 29, will serve an automatic life sentence for shooting and killing the men at the Quebec Islamic Cultural Centre on Jan. 29, 2017. He has been behind bars since the shooting.

He will be allowed to go before the Parole Board of Canada after serving 40 years, ruled Superior Court Justice François Huot — in a decision that left survivors and families feeling "disappointed," "dismayed" and "gutted."

During a sentencing hearing that lasted nearly six hours, the judge read out parts of his 246-page decision to a packed courtroom, describing Bissonnette's actions as "premeditated, gratuitous and abject."

"His crimes were truly motivated by race, and a visceral hatred toward Muslim immigrants," Huot said.

Bissonnette was emotionless as the judge read out his decision and was quickly escorted out of the courtroom.

After a gruelling day, survivors like Saïd El-Amari were visibly upset by the outcome. He choked down tears of anger as he spoke outside the Quebec City courtroom.

"Today is a sad day. We are committing 17 orphans to 40 years of suffering, at the end of which they will have to show up again to keep this assassin behind bars. That suffering starts today and will last 40 years -— I am floored."

Aymen Derbali, who was hit by seven bullets and is now paraplegic, said he almost fainted when he heard the judge's final decision.

"I would have liked to see justice served today," said Derbali.

Megda and Amir Belkacemi, who lost their father in the attack, extended their support to the families of the victims of Bruce McArthur, who was also sentenced today on eight counts of first-degree murder, with a chance of parole in 25 years.

Earlier in the day, Justice Huot did a minute-by-minute run through of the shooting.

Armed with a .223-calibre rifle and a 9-mm Glock pistol, Bissonnette was carrying 108 bullets when he entered the Islamic cultural centre, shooting into the crowded prayer room as Sunday prayers were ending.

Both the Crown and Bissonnette's lawyers said they have to review the lengthy sentencing decision and would not be commenting.

While first-degree murder carries an automatic life sentence, the judge had to decide how long Bissonnette would have to wait before he could seek parole.

In 2011, Stephen Harper's Conservative government adopted Article 745.51 to the Criminal Code, which allows a judge to impose consecutive rather than concurrent periods of parole ineligibility for multiple murders.

Had Huot followed the Crown's recommendation to make the parole ineligibility periods consecutive, for a total of 150 years, it would have been the longest prison sentence in Canadian history.

Imam Hassan Guillet speaks about the impact of Bissonnette's sentence on his victims: 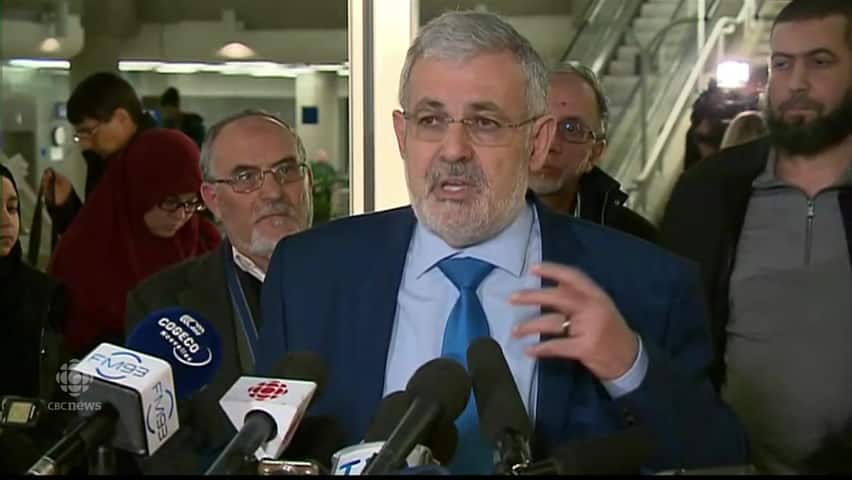 Instead, Huot decided the 25-year parole ineligibility periods will be served concurrently for the first five counts, and added a 15-year period of ineligibility for the sixth count.

He said sending a criminal to die in prison would constitute "cruel and unusual punishment" that goes against the Charter of Rights and Freedoms. By doing so, Huot's ruling modifies Article 745.51.

Huot went through the aggravating factors he felt merit a harsher sentence than a 25-year period, saying Bissonnette planned out his attack carefully, targeting vulnerable, unarmed people in their place of worship, taking aim at the country's right to freedom of religion.

Children inside the prayer room also could have been killed, the judge pointed out.

But he also underlined, several times, the mental health problems Bissonnette had been struggling with in the months leading up to the shooting — one of the mitigating factors he considered.

"I cannot punish you as I would have, a man who was fully sound of mind."

Bissonnette's defence team as well as Crown prosecutors said they would review the lengthy decision before commenting or opening the door to an appeal.

Julia Page is a radio and online journalist with CBC News, based in Quebec City.