Canadian Immigration Minister Ahmed Hussen is discouraging asylum seekers trying to enter Canada from the U.S., urging them to apply in the country in which they first land.

'We want people to claim asylum in the first country that they're in,' says Ahmed Hussen

Canadian Immigration Minister Ahmed Hussen is discouraging asylum seekers trying to enter Canada from the U.S., urging them to apply in the country in which they first land.

In an interview Friday with CBC, Hussen said "irregular" crossings at Canada's borders with the U.S. aren't a new phenomenon, but Canada doesn't want to promote the practice.

"We discourage people from conducting irregular crossings of our borders," he said. "It's not safe, it's not something that we want people to do. We want people to claim asylum in the first country that they're in, which in this case is the U.S."

The number of asylum seekers, most of them Haitian, crossing illegally near the Saint-Bernard-de-Lacolle, Que., border crossing has tripled in the past two weeks — from about 50 a day to 200 a day, according to Hussen.

Later Friday, Hussen made his way to Saint-Bernard-de-Lacolle to see the situation there for himself.

He commended the Canada Border Service Agency, RCMP and Immigration, Refugee and Citizenship Canada (IRCC) employees for their "great work" under the challenging circumstances.

Hussen said the government has implemented measures to accelerate how those coming in are processed, including triaging claims to ensure asylum claimants actually plan to reside in Quebec or move to another province, in which case they would be taken to that province directly.

Starting on Monday, he said border officials at the Saint-Bernard-de-Lacolle station will be asking that question at the border, and redirecting claimants outside of Quebec if that's where they plan to go.

Hussen did not make clear how the asylum seekers who plan to live outside of Quebec will be handled or how they will get to their destinations.

Those who want to stay in Quebec will have their hearings in Montreal to relieve pressure at the border station, and Hussen said more IRCC staff are being assigned to speed up that process.

Asked by a reporter why preparations weren't already in place given indications as early as March that such an influx was possible, Hussen countered that the government was ready.

"We were prepared and we are prepared, and you can see how quickly CBSA, IRCC and RCMP have adjusted very quickly to this new reality," he said.

Hussen said Canada will "always be an open country that provides protection to those seeking sanctuary," but that has to happen in a way that doesn't compromise the "safety and security of Canadians."

Prime Minister Justin Trudeau echoed that message Friday, saying the government wants migration to Canada to be done in "an orderly fashion" and that asylum seekers go through the proper processes. 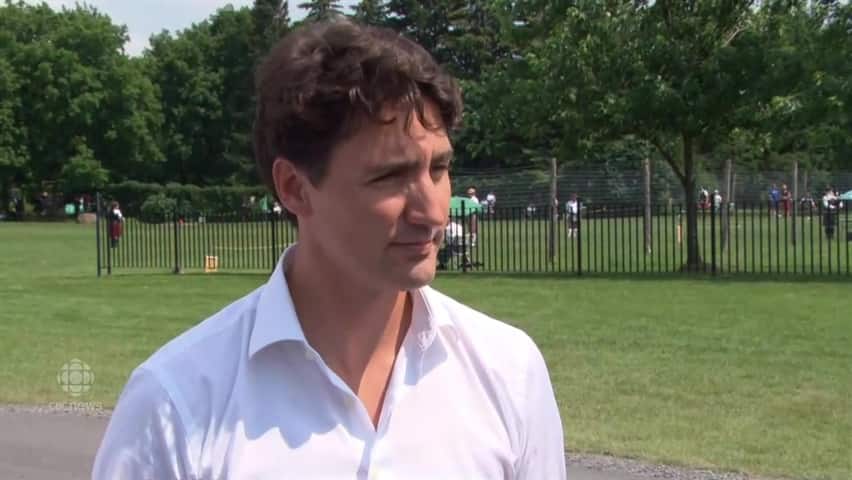 Trudeau on the influx of asylum seekers

4 years ago
2:08
Prime Minister Justin Trudeau spoke to the CBC's Katie Simpson at the Glengarry Highland Games in Maxville, Ontario 2:08

"We remain an open and compassionate country, but part of remaining that way is reassuring Canadians that we are processing properly all these new arrivals."

It's believed Haitians may be flocking to Canada before the special status granted to Haitians by U.S. President Barack Obama in the aftermath of the 2010 earthquake is withdrawn in January.

U.S. President Donald Trump's administration has threatened to end temporary protected status for Haitians, which would mean those who were covered by the program could be deported.

Hussen said Haitians in the U.S. should stay and apply there for refugee status. Canada already permits deportations to Haiti.

Speaking to reporters in Hébertville, Que., on Thursday. Quebec Premier Philippe Couillard implored Trudeau's government to move faster in processing asylum seekers' claims in order to alleviate the pressure on the province.

He said that as long as there is no change in their status, the majority of asylum seekers' expenses are paid for by Quebec.

"We give them social assistance, help to find housing. We give them health care, even education for the children. All that is expensive, and we don't want the delay to be unduly prolonged. We're talking about many millions of dollars."

Couillard said Quebec is "overwhelmed" by the number of people it needs to find housing for, echoing comments by his immigration minister Thursday.

Kathleen Weil said that between Jan. 1 and June 30, 6,500 asylum seekers arrived in Quebec — 35 per cent of all asylum seekers entering Canada during that period.

She said Quebec has a network of governmental and community organizations that can deal with the stream of newcomers, but there is evidence those resources are being strained.

The influx is such that the government has had to open 10 shelters, including space in Montreal's Olympic Stadium, to temporarily house the asylum seekers as they wait to be moved to more permanent living quarters.

Another busload of asylum seekers arrives at Montreal's Olympic Stadium. <a href="https://t.co/F8WV4LLRrt">pic.twitter.com/F8WV4LLRrt</a>

As of Thursday, 1,575 people were being housed in those temporary locations, which include the Grace Dart Extended Care Centre in east-end Montreal and the YMCA on Tupper Street downtown.

Around 500 asylum seekers are currently sleeping at the Olympic Stadium. Its capacity was nearly doubled Friday, to 1050 beds.

The English Montreal School Board announced Friday it's opening its vacant St. Raphael School building in the Villeray neighbourhood for refugees.

The community agency Sun Youth is also helping out the people, mostly Haitians, who have arrived in the past month.

Executive director Sid Stevens said Sun Youth's resources are also being stretched, and it's in dire need of diapers, hygiene products and food.

With files from Stephen Smith, CBC Montreal's Daybreak and Radio-Canada