A train's faulty engine, safety standards ignored and other revelations from the Lac-Mégantic trial

The trial of three former MMA railway workers for criminal negligence causing death in connection with the 2013 Lac-Mégantic rail disaster is about to enter its eighth week. Here's a look back on key testimony from the trial's first 25 days.

The trial of three former Montreal, Maine and Atlantic (MMA) railway workers in connection with the 2013 Lac-Mégantic rail disaster is about to enter its eighth week.

In this dramatic audio recording of a phone call between Harding and Labrie shortly after the explosion, Harding — not knowing the train is the one he left idling on the track at Nantes, 12 kilometres away — describes the horrific scene: 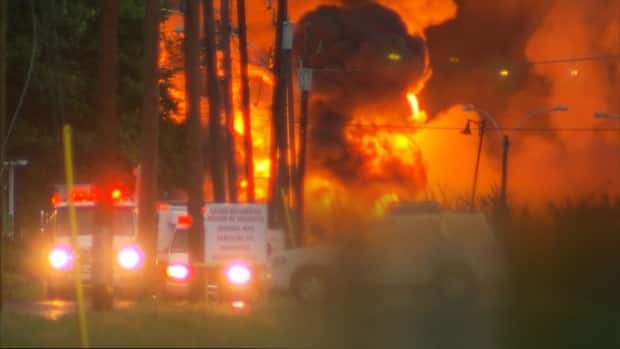 Here's a look back at key testimony from the trial's first 25 days.

Denis Soulard, a provincial police investigator deployed to Lac-Mégantic on the morning of the fatal train wreck, testified that Harding and Demaître did their utmost to help police in the hours after the tragedy.

"He collaborated 100 per cent," Soulard said of Harding's assistance when they went to see the locomotive he'd driven to Nantes the previous night. "He answered every question we could have about trains."

Michael Horan, the former MMA assistant director of transportation, spent six days in the witness box, describing a work environment in Quebec in which his team received little material support from the U.S. head office. Though he was in charge of safety and training, Horan testified he had no budget or training for how to teach safety standards.

In his testimony, Horan also described the pushback from MMA employees about the company's move to one-man train crews. He testified at least nine handbrakes should have been applied to the train Harding left idling at Nantes on the eve of the disaster.

François Daigle, the former MMA engineer who operated the ill-fated lead locomotive the day before Harding took it on its last trip, testified that he complained about the engine's defects and asked operations manager Jean Demaître to replace it.

Demaître, he told the court, dismissed him, saying, "You're complaining again?"

Daigle testified that it was common practice for MMA's top management to play loose with railway regulations. He confirmed the maximum weight allowed for an MMA tanker train at the time of the disaster was 6,300 tonnes, not counting locomotives.

The train involved in the tragedy weighed 9,100 tonnes.

Asked whether he should have reported the problems with the lead locomotive to Harding before Harding pulled out of Farnham, heading for Nantes, Daigle testified he still felt guilty.

"I've often wondered if I could have done something more to help prevent the Mégantic disaster," Daigle said.

A former MMA rolling-stock inspector, Yves Gendreau, was presented with a brake test form with his signature on it, and asked about testing the train's brakes. "I don't remember having performed the brake test on these cars," replied Gendreau.

"The only test that was done was the SBU test [a device to test emergency brakes]," he said.

At the time of the disaster, he'd only been an inspector for a few weeks.

Retired Transport Canada inspector Alain Richer testified that two days after the runaway train derailed, he and a colleague found another MMA train parked in nearby Vachon that was secured with only five handbrakes.

MMA's own internal regulations showed the train should have been secured with double that number, he said.

Taxi driver André Turcotte testified that he picked up Harding on the eve of the disaster at Nantes, Que., where the train was parked before rolling into Lac-Mégantic.

He testified that Harding told him "one of the engines had worked hard on the way to Nantes. But the company told him to keep going."

Turcotte, a former provincial police officer, also said he noticed that night clouds of black smoke were billowing from the stack of the locomotive.

He said Harding told him it was customary to leave the train idling overnight in Nantes when the MMA used this route. He said he shared his concerns about the environmental impacts of the smoke and oil with his cab passenger.

"Tom told me the foreman, Jean Demaitre, is related to people in the Environment [Ministry.]," Turcotte testified. "He said, 'We're never checked — f--k all.'"

Jean-Luc Montminy, a volunteer firefighter, headed home in the small hours of July 6, 2013, after helping put out a fire in the lead locomotive of an idling tanker-train at Nantes, Que.

As he approached a level railway crossing, he saw its red lights were lit up to warn of an approaching train.

"I couldn't figure out what was going on because I didn't hear a whistle or a train engine," Montminy told the court.

Just as he decided to cross the tracks, the train appeared — the motor shut off, all its lights out, moving full speed ahead towards the town of Lac-Mégantic.

MMA foreman Jean-Noël Busque described how he was dispatched to the site of the train fire in Nantes, late on the night of July 5, 2013.

After it was out, he called Labrie in Farnham, who told him he "could go back to sleep," Busque told the court.

Busque said sometime after 2 a.m., his boss, Daniel Aubé, called him to tell him there was a fire in downtown Lac-Mégantic. He asked him to head there to see how serious it was.

"I didn't understand what was going on," Busque said, explaining he then called Labrie in Farnham to ask the controller  if "his train" was still in Nantes.

"For sure, it's in Nantes," Busque said Labrie told him.

"I can't remember if he asked me or if I told just him, but I went back to Nantes to see if the train was there."

Warning: Explicit language in the audio that follows: 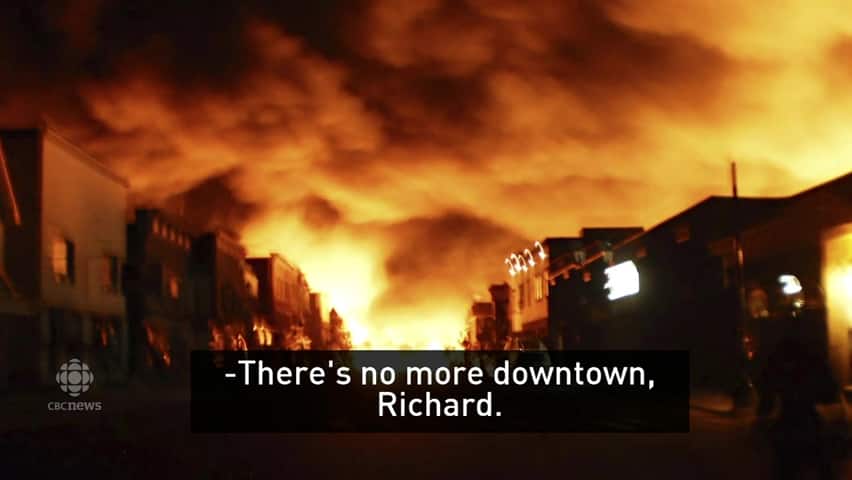 The court heard gut-wrenching audio recordings from the early morning of July 6, 2013, as MMA employees tried to figure out the cause of the blazing inferno that was ravaging downtown Lac-Mégantic.

Around 2:30 a.m. ET, a taxi dispatcher from Lac-Mégantic called Labrie, informing him it was MMA's 74-car fuel train, parked 12 kilometres away at Nantes, that had rolled into downtown Lac-Mégantic, derailed and burst into a raging blaze.

"It's burning like hell, man," the dispatcher says on the recording. "There is no more downtown, Richard."

"Dozens and dozens of people are going to die."

Steve Jacques, the former rail traffic controller who gave locomotive engineer Tom Harding the green light to leave Farnham for Nantes, testified that he was not aware the lead locomotive was defective.

Jacques said problems such as fires and overheating of locomotives were frequent and usually dealt with by the teams on the ground, without bothering the higher-ups.

Under cross-examination, he acknowledged that Harding told him during the run to Nantes on July 5 that there were problems with the lead locomotive.

Jacques never documented those problems nor relayed them to Labrie, the traffic controller who came on-shift after him.

As long as the locomotive didn't die, "it just keeps pushing," Jacques testified. "If it's rolling, it's rolling."

With files from Claude Rivest and Alison Brunette