More than 500 dogs have been seized in southwestern Quebec where they were said to be living in poor conditions without enough food and water.

Raid 'without precedent' in Quebec 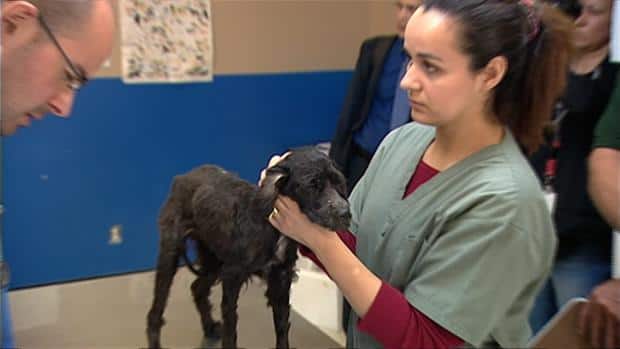 9 years agoVideo
0:12
Hundreds of dogs have been rescued from a Quebec mill. 0:12

More than 500 dogs have been seized in southwestern Quebec in what could represent the largest animal cruelty case in the province's history.

The dogs were found Friday on a property in a rural area west of Montreal. They were reported to be living in poor conditions without sufficient food and water.

Guy Auclair, a spokesman for the Quebec Ministry of Agriculture, Fisheries and Food, said the scale of the seizure is without precedent in Quebec.

"We have had this kind of situation before, but [with] a lower number of animals," Auclair said in an interview Saturday.

Auclair said the dogs were different breeds and ranged in age from puppies to fully-grown.

Many were found suffering from skin and respiratory problems, he said.

They were placed under the care of Humane Society International, which had already transported several hundred dogs to a treatment centre Saturday.

Other dogs received treatment at the scene.

"This is definitely one the largest operations that we've ever come across in Canada," said Lauren Scott, a spokeswoman for the organization who was at the site.

"It also involves some of the worst conditions we have seen to date. I personally can say that I found it heartbreaking to see what these dogs have endured."

The investigation is ongoing and charges could be laid against the operators of the puppy mill, Auclair said.

It will be up to the courts to decide whether the dogs will be put for adoption or returned to their original owners, he said.

When you buy a dog, do you know its background?

"They just so desperately need a second chance so we'll be turning to the public for that," she said.

The incident is just the latest in a series of disturbing animal abuse cases in Quebec that have made headlines in recent years.

The province has long been considered the puppy mill capital of North America, with an estimated 800 unregulated breeding operations in Montreal alone.

Quebec was named "the best province to be an animal abuser" in the 2011 annual report prepared by the U.S.-based Animal Legal Defence Fund.

Last month, nearly 40 malnourished Huskies were found chained to trees on a property northwest of Montreal.

Reports of animal suffering at Montreal's privately-held Berger Blanc pound that surfaced in May also shocked many across the country.

Videos of cats and dogs suffering, as well as images of questionable euthanasia practices documented in a Radio-Canada report prompted criticism from the city and the province.

The Quebec government is in the process of introducing new animal welfare regulations designed to crack down on puppy and kitten mills in the province.

The rules would include minimum standards of care and cleanliness and norms for euthanizing unwanted pets.