Three people have been arrested and two charged with theft, conspiracy, handling stolen goods and fraud related to the $18-million maple syrup heist in Quebec in the summer. 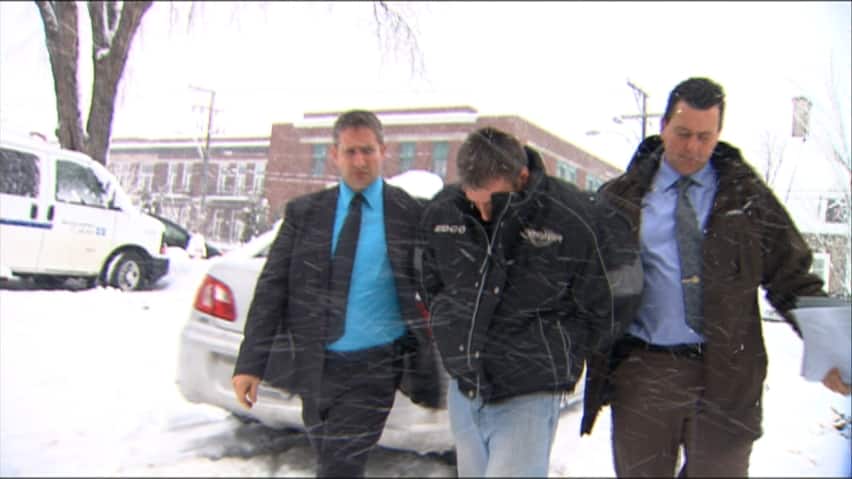 8 years ago
1:34
Two people are charged and one other is arrested for the theft of $18M worth of maple syrup last Aug. Catou MacKinnon has the latest. 1:34

Three people were arrested and two have been charged in connection with the $18-million maple syrup heist in Quebec in the summer.

Quebec provincial police are still seeking five suspects, four men and one woman, in connection with the theft of maple syrup from a warehouse last summer.

CBC News has learned that Caron once worked as a financial adviser.

Between August 2011 and July 2012, thieves made off with 9,600 barrels of maple syrup from a warehouse in Saint-Louis-de-Blandford, about 95 kilometres southwest of Quebec City.

It was initially believed about $30 million worth of syrup was stolen, but later checks established that fewer barrels were missing than was first reported.

Police now believe the barrels were siphoned off over the course of a year.

Some syrup may have gone to U.S.

The maple syrup federation's interim director, Simon Trépanier, said it's a relief to know arrests have been made.

However, police have recovered only about 70 per cent of the stolen syrup, and Trépanier believes the rest might have already been sold in the United States.

"We're asking the government to help us with that," Trépanier said. "If there's any maple syrup ... stolen and it's now in the States, if it's our syrup, we want it back."

A spokesman for Quebec provincial police, Claude Denis, said more than 40 search warrants were executed in New Brunswick, Ontario and in the United States in connection with the theft.

"During the investigation, police officers met approximately 300 people working in the production and sale of maple syrup and transportation," said Denis.

In addition to the recovered maple syrup, police also seized electronic scales, elevator platforms and kettles that are used in the production of maple syrup.

Étienne St-Pierre, the owner of the export business, said the syrup came from his regular providers in Quebec and not from the warehouse in Saint-Louis-de-Blandford.

At the time, the company's general manager, Julienne Bossé-Desrosiers, told Radio-Canada she had documents to prove the company bought its syrup directly from producers.

The warehouse stored about 3.4 million litres of bulk maple syrup, which belonged to the Federation of Quebec Maple Syrup Producers.