Fifteen per cent of girls who answered a CBC-commissioned anonymous survey of more than 4,000 students across Canada say they've had a sexual act forced upon them, including oral sex or being forced to touch someone in a sexual manner.

It was a typical high school crush on an older boy. She was new to school, in Grade 9. He was in Grade 12. So when they started flirting on Snapchat, Brooke thought their relationship was special.

"But things didn't happen the way they were supposed to," the teen said.

After the young man picked Brooke up from a babysitting gig late one night in 2017, they went for a drive. He then parked behind a local arena in Stephenville, N.L., and things progressed at a rate with which Brooke was uncomfortable.

The teen says she was sexually assaulted and choked. Brooke wanted to resist, but was scared of how the older boy would react.

Because of a publication ban, we're not using her real name.

Brooke is not alone.

CBC recently conducted an anonymous survey of more than 4,000 students across Canada between the ages of 14 and 21, who answered questions online about school-related physical and verbal abuse, as well as about sexual harassment and assault. They were asked to reflect on their experiences from kindergarten to Grade 12.

Fifteen per cent of female respondents said they have had a sexual act forced upon them, including oral sex or being forced to touch someone in a sexual manner.

That means in a class of about 20 female students, three say they've been sexually assaulted by another student.

"That's an appalling statistic," said Tracy Vaillancourt, a violence prevention expert at the University of Ottawa.

"What concerns me is that people [will] dismiss this number … because they think it's too high and that can't be possible. And yet it is possible."

Nine per cent of male students also reported being sexually assaulted by peers.

Janice Kennedy is the executive director of the Bay St. George Status of Women Council in Stephenville, N.L., which supports survivors of sexual violence.

"That's the scary part," she said of the young age some girls first experience sexual violence. "Sex is such an intimate act, and for it to be forced and done against someone's will, it really violates a person's sense of trust, of what is safe and what is OK."

About 80 kilometers northeast of Stephenville, in Corner Brook, N.L., a mother sits at her kitchen counter, recalling a late-night phone call no parent wants to receive.

It was from her ex-husband. Their eight-year-old daughter, Emma, had told him that an older boy from her school had been touching her private parts — and the abuse had been going on for months.

"I couldn't speak. I was mad. My heart was beating out of my chest," said Rachel.

Her and her daughter's names have been changed to protect their identities.

The boy accused of assaulting Emma was 14, nearly twice her age. They both attended the same school, which enrols students from kindergarten to Grade 12, and rode the same bus.

This was where Emma and another young girl allege they were assaulted by the same boy.

Brooke and Rachel were disappointed by how the schools — both of which fall under the Newfoundland and Labrador English School District (NLESD) — handled their complaints.

Brooke said she confided in a friend about what had happened in the days after, and the friend urged her to talk with their school's guidance counsellor. So she did.

Although she didn't know it at the time, Brooke was one of three girls at the school to come forward with allegations against the same student.

The school contacted the RCMP, and the male student, who cannot be named because of a publication ban, was arrested and charged with six counts of sexual assault, among other offences.

Three separate trials took place in the following months. The student was eventually acquitted of four counts of sexual assault, including those related to Brooke. The two other charges were dropped by the Crown, and he pleaded guilty to sexual interference in one case.

WATCH | CBC's David Common and experts take your questions about how to prevent school violence:

In the lead-up to his trials, the male student was allowed to return to Stephenville High School, at times attending the same classes as the young women who had come forward — a decision that changed the climate of the school and sparked tension in the community of 8,000.

"I was scared," Brooke said, remembering the sick feeling she had at the thought of returning to school, potentially seeing the young man again.

She said she also felt let down by adults she thought were supposed to keep her safe. "I felt like I was the one who did something wrong."

Assaults should be flagged to parents, says mom

As for Rachel's daughter, she and her family spoke to the school's principal the morning after Emma told them about the bus assaults. The boy's parents removed him from the school, and he was charged with three counts of sexual assault in June 2018.

Despite the charges, no note was sent home to parents.

"They have no issues sending home a public notice for head lice or any other health concern in the school," said Rachel. "What's the difference in sending home a letter stating … 'There's been allegations of a safety concern on the school bus. We'd like you to have open lines of communication with your children, make sure that they're OK?'" 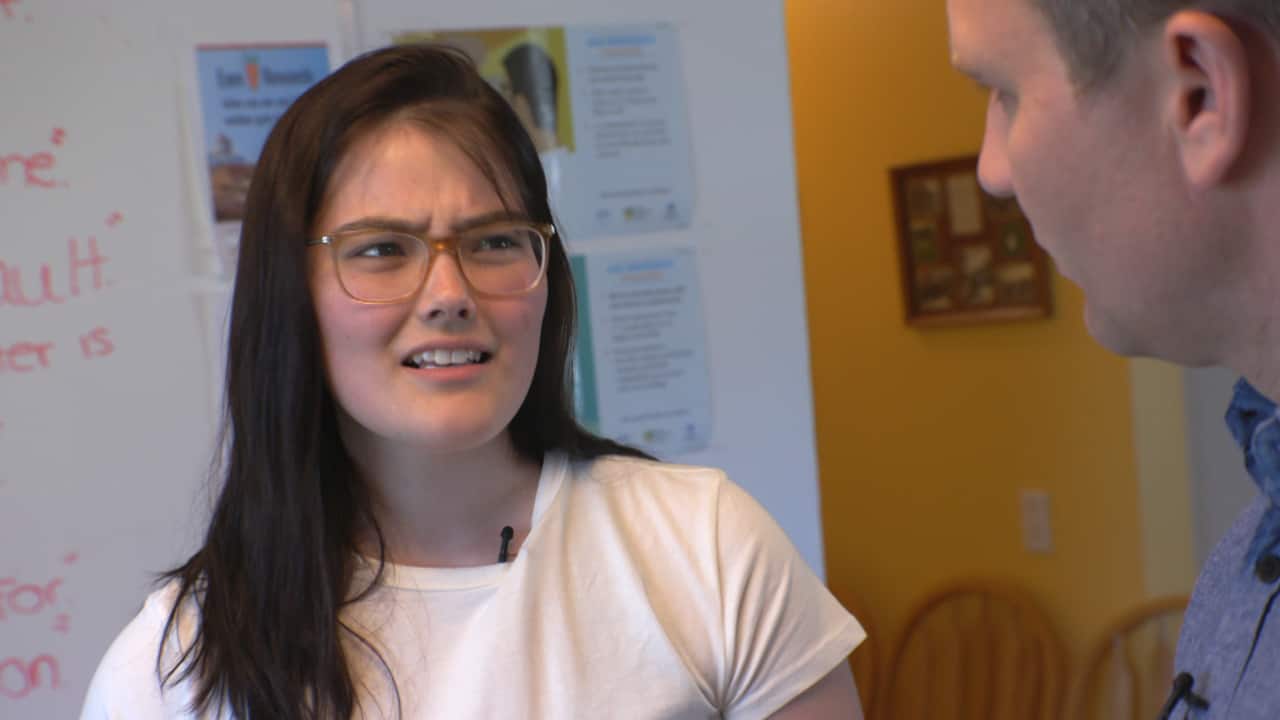 1 year agoVideo
0:57
Albigail Wieffering, 18, objected to the decision to allow a student accused of sex assault back into school with his alleged accusers at Stephenville High School in Newfoundland. She says girls fear they won't be believed when they report sex assaults. 0:57

When CBC News posed this question to the school board at the time, the director said the board would have been extremely limited in what it could say under the Youth Criminal Justice Act.

During a trial that took place months later, the boy was acquitted of all charges. The boy is now back at the same school, Rachel said, so she moved Emma elsewhere.

"We had to relocate to make our child feel safe. It's very sad," she said.

The CBC survey asked students who had experienced sexual violence how often they reported the inappropriate acts to school officials.

Three in five female respondents said they never did. And of those who did, only a quarter of them were completely satisfied with how the school responded.

This can impact how these girls might act in the future, Vaillancourt said.

"Those who are victimized don't feel like they have a voice," she said. "We're not listening to them. We're not believing them."

Can't track what you don't know

In Newfoundland, schools are required to document inappropriate student behaviour and report it to their district on a monthly basis. School boards must make sure schools are collecting, analyzing and reporting this data.

The NLESD uses Review 360, a program that tracks student behavioural and disciplinary data. According to a board report, this data is used to "help schools target areas for improvement."

But Marketplace has learned that Brooke's attack was never documented in the school's system.

Even though the alleged assault didn't take place on school property, experts say this is exactly the type of case that should be recorded in the school's violent-incident data system.

"When something affects the school climate or the school culture, it is a reportable offence," said Vaillancourt.

Sexual assault is likely to affect the educational potential and mental health of the victim, she said.

Brooke's mom, who also can't be identified because of the publication ban, said she was shocked her daughter's case wasn't recorded.

"It only lends to the situation that we've had right from the get-go with the school and the school board ... that it feels like it wanted to be swept under the carpet," she said.

Rachel said a board administrator told her Emma's case seemed to be an isolated one and that in order to take corrective measures, this type of abuse would have to be going on at more than one school.

"[The administrator] basically told me that my child wasn't enough," she said.

In an effort to find out if this was a broader issue, the family made a formal request to the school board for its data on similar cases at their daughter's school. That was how they found the school administration had improperly recorded Emma's alleged assaults.

Between their daughter and the other girl, her family knew of at least four separate allegations at the hands of the same boy. But the school's records claimed there had been only one reported case of sexually inappropriate behaviour in the last five years.

When the family asked NLESD about the discrepancy, the board said school staff were confused by the reporting system. The board updated their records months later — after Rachel's family pointed out the error.

WATCH | CBC's David Common and experts take your questions about how to prevent school violence:

The NLESD says it's working on a protocol for staff to follow when a student comes forward with allegations of sexual assault.

"I mean it's absolutely scandalous that they don't have that kind of a policy," said Lynn Moore, a Newfoundland lawyer specializing in sexual assault cases.

"Nobody was suggesting that [the male student in the Stephenville case] be denied an education. But what they were suggesting was that girls had the right to go to school in an environment free of intimidation and fear."

Marketplace made multiple interview requests to the board's education director, Tony Stack, but he turned down the request. Instead, NLESD sent communications manager Cheryl Gullage to speak when host David Common arrived at the board's head office in St. John's.

"We will continue to look to best practices and continue to work with our partners in the justice system and our police employees to make sure everyone that is working in the best interest of our students," Gullage said.

But when pushed about a new sexual assault and harassment policy for schools, she wouldn't provide details.

Marketplace reviewed violence prevention policies in various provinces and found that many school boards lump sexual violence with other forms of bullying. Sexual assault is often listed alongside offences such as physical violence and vandalism.

But experts say sexual violence is violating in a way other types of violence are not and requires a different approach.

When good policies are matched with staff who are trained and students who are properly educated, experts say children are less likely to be exposed to sexual violence.

Marketplace found one policy in New Brunswick's Anglophone West School District that stood out because it was specific to sexual violence. It provides a checklist with clear steps to take to handle the situation, along with an entire section on how to avoid inflicting so-called secondary wounds when responding to a sexual assault disclosure by not blaming or shaming the survivor.

"It's not like we just heard about school violence," said Vaillancourt. "This is something that existed as long as we put kids together in groups. When you have clear sanctions and clear policy, you have a clear approach to dealing with it."

If you have feedback or stories you'd like us to pursue as we continue to probe violence in schools in the coming months, please contact us at schoolviolence@cbc.ca.