A larval-stage zebra mussel has been found in water from Shoal Lake, Ont., the source of Winnipeg's drinking water.

A larval-stage zebra mussel has been found in water from Ontario's Shoal Lake, which is connected to Lake of the Woods and is the source of Winnipeg's drinking water.

A single intact veliger, the microscopic larva of a zebra mussel, was found in one of six water samples taken from the lake, according to a news release issued jointly on Monday by the provinces of Manitoba and Ontario.

It was found in a water sample that was taken in August 2018 near the Clytie Bay public boat launch on the northeast side of the lake, which straddles the Manitoba-Ontario border.

Zebra mussels are an invasive species that has colonized the Great Lakes and the Red River/Lake Winnipeg drainage system.

The bivalves coat surfaces and can clog water pipes. They also have choked out native species in some places, and their shells litter beaches.

Scientists plan to monitor Shoal Lake this summer to see whether more veligers are present.

"There's a real risk of zebra mussels getting into Shoal Lake and Lake of the Woods now that they've been found in Shoal Lake," said Scott Higgins, a scientist with the International Institute for Sustainable Development and Experimental Lakes Area.

Unlike sandy Lake Winnipeg, Shoal Lake and Lake of the Woods have a lot of exposed granite that could serve as zebra mussel habitat.

But the chemistry of these lakes could inhibit the development of zebra mussels, Higgins said.

"All the lakes in the Canadian Shield typically have low calcium concentrations and zebra mussels need calcium to build their shells," he said.

If zebra mussels do colonize Shoal Lake and Lake of the Woods, there are many potential environmental effects. The invasive species compete with native mussels for food, growing space and calcium.

The City of Winnipeg has been preparing for the prospect of zebra mussels in Shoal Lake since the 1990s.

The city has taken steps to protect its water supply and has set aside $1.2 million to protect the Winnipeg aqueduct intake pipe and other aspects of its facility at Indian Bay on Shoal Lake, a city engineer told council last year.

The city could add chlorine to the aqueduct intake to prevent mussels from growing in the pipe and it also has plans to scrape out the molluscs if need be, he said.

The Manitoba and Ontario governments are working together and have informed Indigenous communities and other people who live along the lake about the discovery, the interprovincial news release says. Shoal Lake 40 First Nation and Iskatewizaagegan Independent First Nation are among those notified.

"Shoal Lake water quality data will be reviewed to determine the risk or likelihood of zebra mussels forming a population and, if necessary, Ontario and Manitoba will discuss possible options aimed at preventing the further spread of zebra mussels," the release says.

Boaters are asked to remove aquatic plants and invasive species, drain all water and remove drain plugs before moving their watercraft, the release says.

The release also asks boaters to dry all equipment and surfaces before placing boats in another water body, and properly dispose of all bait. 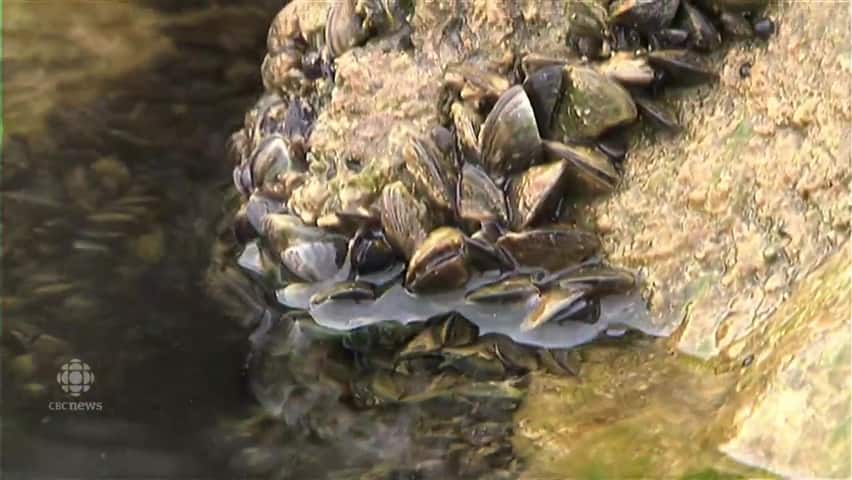 2 years ago
1:52
A larval-stage zebra mussel has been found in water from Shoal Lake, Ont., the source of Winnipeg's drinking water. 1:52

- With files from Bartley Kives