A farming project for Yazidi refugees in Manitoba that aims to bring the local community together and bolster their food security is undergoing a big expansion this year.

Adol Ilyas has farmed for as long as she can remember.

It's how her family earned their living in northern Iraq, before ISIS swept through their village.

Now, the 52-year-old is getting the chance to return to those roots.

She's part of a farming initiative launched by a Yazidi refugee resettlement group in Winnipeg, Operation Ezra. Dozens of synagogues, churches and schools are part of the group, which has sponsored a dozen Yazidi refugee families so far. It also works with government-assisted refugees.

The aim of the farming project is to unite the Yazidi community and help refugees who are struggling to meet their own food needs.

Nearly five years ago, ISIS militants launched attacks on the religious minority in northern Iraq, killing thousands of Yazidis and abducting and abusing many women and girls. The UN called it a genocide.

Ilyas and five of her children escaped, but her other five children, all adults, remain in refugee camps. Speaking through a translator, she said she worries about them constantly.

But getting the chance to farm has brought back good memories. It has helped her cope.

And she's not alone.

"This is probably one of the most successful projects that we've run," said Michel Aziza, chair of Operation Ezra.

Many of the Yazidi newcomers were farmers. So an idea sprouted for refugees and volunteers to farm potatoes on less than an acre of donated farmland near Portage la Prairie, an hour west of Winnipeg.

The project yielded about 315 kilograms of potatoes last fall.

This year, the initiative is much larger.

More than 50 families are farming approximately eight acres of land in nearby St. François Xavier. They're expecting to harvest about 5,400 kilograms of potatoes, plus dozens of other crops — enough to feed about 250 people for months, and to sell what is left over at local farmers markets.

Bo Wohlers, president of Shelmerdine Nurseries, donated this year's land. He's a congregant of the Charleswood United Church, which is working with Operation Ezra.

"I thought they deserved a good start in Canada, so we offered the land," he said.

Refugees can 'come together as a community'

Aziza says in a world where government-assisted refugees face so many challenges, including language, banking and transportation, to name just a few, the farming project is where they can be themselves and work and socialize together as a community.

That sentiment rings true for Majid Haji, one of Operation Ezra's privately sponsored refugees. He farmed for more than a decade back in Iraq.

He felt nostalgic when he got out in the field here, he said through a translator.

He was reminded of his home as soon as he touched the soil, he said — although the soil in Iraq was a 'bit tougher.'

An official with Immigration, Refugees and Citizenship Canada said the government has resettled more than 1,400 ISIS survivors since 2016, with Yazidis making up more than 85 per cent of that group.

Aziza says Operation Ezra plans to sponsor even more families, and to keep growing the farming program as well.

He thinks the refugees and volunteers could work up to 20 acres next year.

Adol Ilyas says she isn't thinking that far ahead. She's still focused on this year's harvest — and looking forward to harvesting the crops and feeding families. 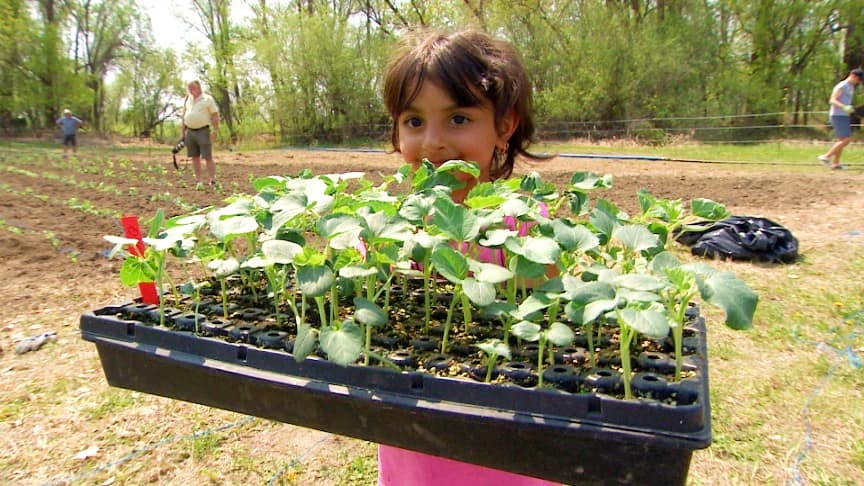 2 years agoVideo
2:13
A group of Yazidi refugees are quite literally getting back to their roots. Picking up their lives here in Canada, where they left off in Northern Iraq. 2:13