Manitoba saw hundreds of COVID-19 cases in workplaces and stores after the province ordered most businesses shut and barred private gatherings last November, according to government data obtained through a freedom-of-information request.

"I think this is a pretty good warning signal for us that we're not necessarily following all the procedures that we need to be," said University of Manitoba virologist Jason Kindrachuk.

New provincial government data obtained by CBC News through a freedom-of-information request provides the first detailed snapshot of where Manitobans were infected with the novel coronavirus that causes COVID-19 from Nov. 1 to Dec. 15, 2020.

The illness infected nearly 16,000 people across the province during that six-week period. Half of those cases were tied to close contacts such as household members and a quarter are listed as unknown or missing information. Another quarter were linked to a variety of community sources.

In total, contact tracers tied 3,764 cases to community, and investigators deemed almost 40 per cent of those — 1,475 — as unknown transmission.

WATCH | See where COVID-19 spread in the fall when most businesses were closed: 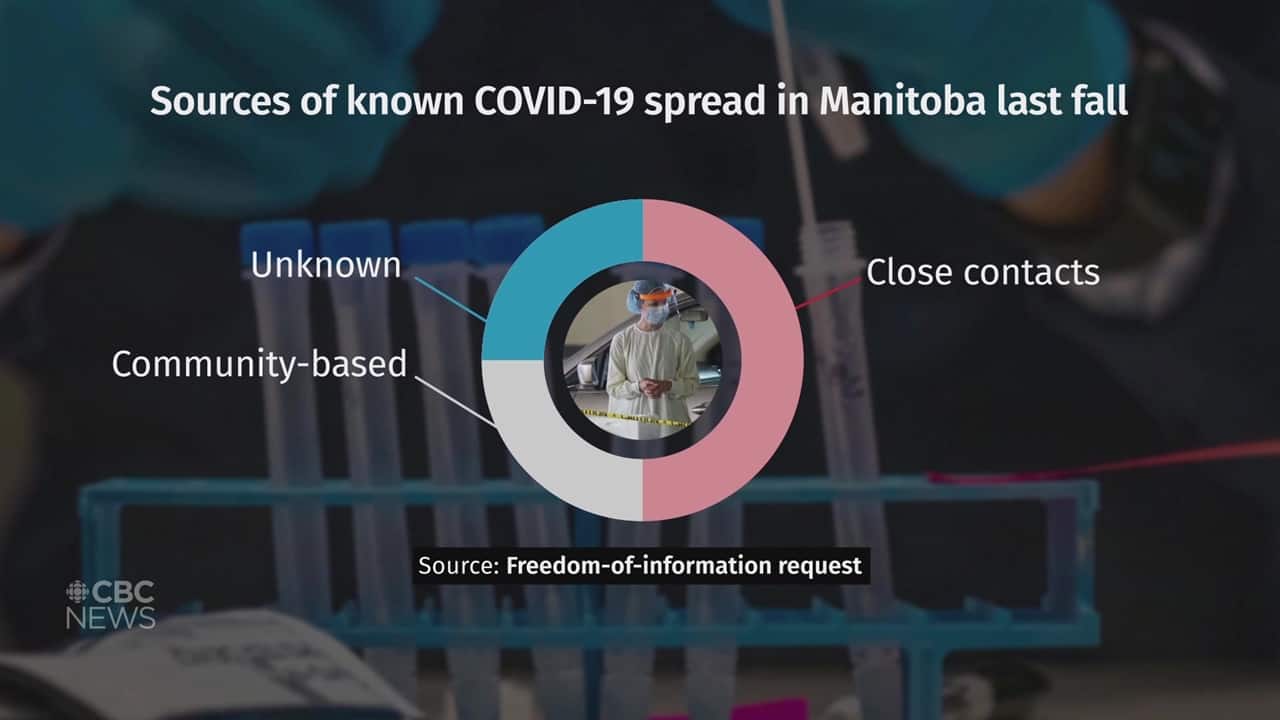 For the rest of the community cases, workplaces topped the list, accounting for 873 infections, or a quarter of all community-based infections.

Retail was responsible for the most COVID-19 cases after that, with 423. Outbreaks at health-care facilities accounted for 380 infections. (That doesn't include personal care homes, which fall under the province's "congregate settings" category. There were 202 cases in that category during the six-week period.)

Another 216 cases were linked to transmission inside educational institutions and daycares.

The province said some cases might have multiple sources of exposures.

Kindrachuk said he wasn't surprised COVID-19 was spreading in workplaces and retail stores, because they are among the few places still open during Manitoba's red-level restrictions, which came into effect in Winnipeg on Nov. 2, then expanded to the rest of the province on Nov. 12.

He added, though, it may be a sign people were letting their guard down while at work.

"There's always this question about comfortability in workplaces," he said.

"Are people maybe not adhering as close to infection control measures because they have that built-up comfortability, that subconscious belief that they're OK because the others around them are OK, and these are people that they trust and they know?"

The province has recommended people work at home, but has not mandated that under the current public health order, which forces non-essential businesses to close but allows stores to open for the sale of essential goods.

During the six-week period starting Nov. 1, Manitoba saw hundreds of daily new COVID-19 cases announced. The province's COVID-19 death count skyrocketed, with 439 deaths reported in that time, reaching a total of 508 by Dec. 15.

Toronto social epidemiologist Dr. Farah Mawani said other factors may have been at play in the high number of workplace-related cases.

"They don't have the power to choose to stay at home if they're sick or if a member of their household is sick."

She said it's important to look at some of the systemic factors that might prevent someone from working from home.

"One thing that we do know globally, and certainly in Canada, [is] a very high proportion of people working in precarious employment conditions are our racialized people. And many of them are also immigrants who are underemployed."

Meanwhile, the Retail Council of Canada said there could be several reasons for spread in stores, including the fact November and December are usually the busiest time of year for retailers. As well, there were few other places people could gather, the council says.

But its Prairie director of government relations, John Graham, said it's important to look at the number of infections tied to retailers in the context of total cases for the province during the six-week timeframe.

That number shows retail stores were connected to just under three per cent of total COVID-19 cases.

"Retail stores — frankly, most businesses — create a safe environment and [in] jurisdictions where they remained open, they haven't sacrificed the economy the way that Manitoba has done," he said.

"We think that retail stores are well-positioned to continue to create a safe environment for their employees and for their customers, and we would be disappointed if we don't start to see retailers open soon."

But Kindrachuk said the message for Manitobans from public health should continue to be only shopping when necessary and designating one shopper per household.

A more detailed picture of where Manitobans are getting infected with COVID-19 will be useful in the future, he said.

"When we start thinking about further restrictions, if we have to go down that road, at the least we know now a little bit better where some of the transmission is occurring and maybe how to strategize for the restrictions." 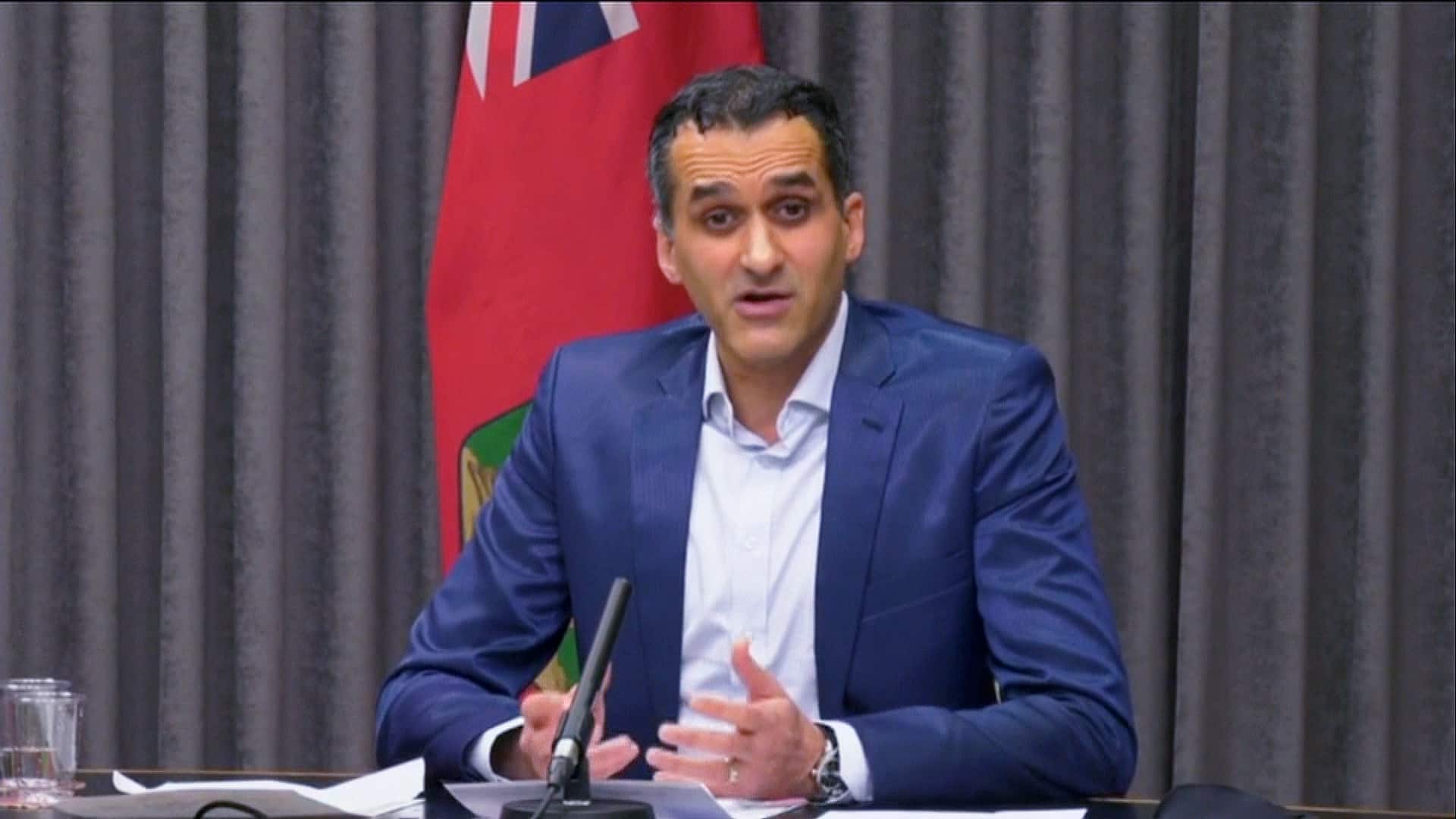