As soon as you walk in the door of J. Neufeld's wood shop, Wood Anchor, you are hit with a sensory overload. The smell of freshly cut oak and elm is heavy in the air, as is the sweet smell of wood glue and sawdust. 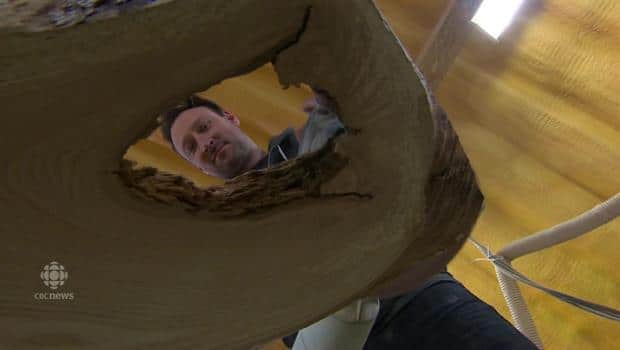 6 years ago
1:43
J. Neufeld calls himself more artist than woodworker and nothing shows that more than the piece he created for the newly renovated Canada House on Trafalgar Square in London, England. 1:43

As soon as you walk in the door of J. Neufeld's wood shop, Wood Anchor, you are hit with a sensory overload. The smell of freshly cut oak and elm is heavy in the air, as is the sweet smell of wood glue and sawdust.

It is here that Neufeld creates his one-of-a-kind furniture pieces that evolve from salvaged wood into something much more.

"They come to us with an idea and then we chat about it," said Neufeld. "Then we kind of throw in our own flare and try to come up with something that's going to work within their budget and make a nice piece."

Neufeld thinks of himself more as an artist than a woodworker and nothing shows that more than the piece he was commissioned to build for the newly renovated Canada House on Trafalgar Square in London, England.

The only direction he received was to represent the province of Manitoba in the piece.

The officially reopening of Canada House on Thursday was attended by Queen Elizabeth and Prince Phillip, and they likely visited the Manitoba Room.

"I know that there are a lot of events that happen in Canada House, possibly the Queen ran her hand along it as she walked by," said Neufeld. "That's pretty cool."

1 of 0
​Neufeld hand-picked the oak log that was used in the piece because of its story. It grew along the Assiniboine River and was between 180 and 220 years old, making it one of the oldest he Neufeld has seen. In its lifetime, that old oak tree would've been exposed to all sorts of extreme elements.

"Going through really harsh conditions, floods and bitterly cold winters and really hot summers and all those extremes, kind of the same things that Manitobans have to deal with," Neufeld said.

"We also wanted to have some cracks in the table that kind of symbolizes the Red River and brought some of that idea into it, and so we picked logs based on some of those design concepts in mind."

The Canada House table took about two and a half months to complete, and most of that time it spent drying. Once the log is chosen, cut, and dried in a giant sea container converted into a kiln, then the real art begins. After it was dried, they had it completed in a week and a half.

"That was kind of how the process went for us, was to be able to take this idea that they wanted a table, it had to be this size, and it had to tell a story."

Neufeld got to where he is today by chance, when he got a job in construction 18 years ago. He said he always thought it would lead to something more interesting — and it did.

"What we've always tried to do with any of the art that we're making is, it has to have some kind of function for us, so by putting this thing in there, it still is a table, it still can be used as hard as you would on any other table, but at least it's really beautiful and designed to be like that and just looked at."

Neufeld's company, Wood Anchor, uses reclaimed wood. His sources include timber from buildings, diseased elm trees removed by the City of Winnipeg, and other downed trees.