A large "quilt" made out of hundreds of objects from Canada's residential schools, from old doors and pieces of stained glass to belts used to punish aboriginal children, goes on display at the Canadian Museum for Human Rights in Winnipeg this week.

A giant "quilt" made out of hundreds of objects from Canada's residential schools, from old doors and pieces of stained glass to belts used to punish aboriginal children, goes on display at the Canadian Museum for Human Rights in Winnipeg this week.

The Witness Blanket is a 12-metre-long art structure by Vancouver Island artist Carey Newman, featuring 887 objects gathered from 77 communities across Canada and assembled like a traditional blanket. 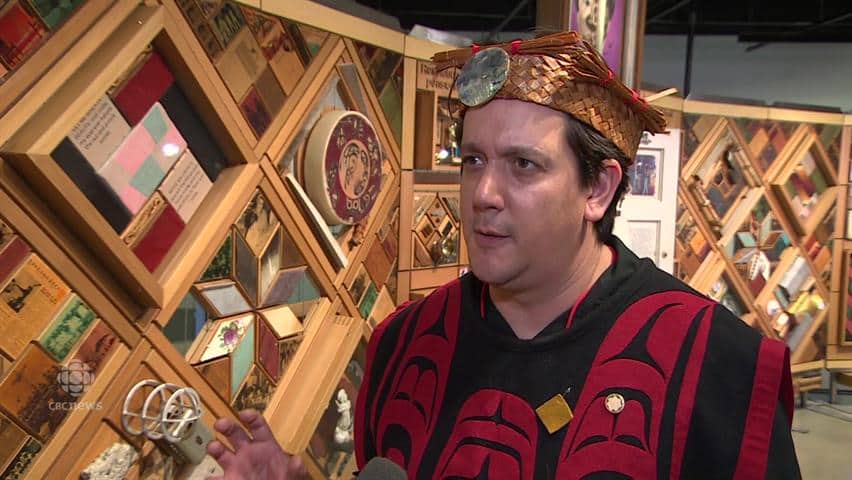 Artist Carey Newman shares his inspiration for the Witness Blanket

5 years agoVideo
1:36
Vancouver Island artist Carey Newman created the Witness Blanket as a monument to children who were forced to attend Indian residential schools. 1:36"The pieces came from all parts of Canada, primarily from residential school sites, from survivors, and then we have also pieces from government buildings, from churches and from current traditional structures," Newman said on Monday.

"It was my way of making a visual representation of reconciliation."

An opening ceremony for the Witness Blanket takes place on Monday, while the exhibit will open to the public on Tuesday — which is also the day the Truth and Reconciliation Commission's final report will be released.

Newman said the installation serves as a national monument recognizing the atrocities of the Indian residential school system, which was created and run by churches and the federal government to assimilate indigenous children into Canadian society.

It's estimated that more than 150,000 aboriginal children were taken from their families and communities and forced to attend residential schools across Canada.

Parts of the story

Newman and his team travelled more than 200,000 kilometres over 12 months to gather the objects for the Witness Blanket and speak with thousands of survivors.

Elements include a child's shoe, braids of hair, a hockey trophy, a doorknob, a piece of belt, a photograph of a child and a letter from parents asking that their children come home, all supported in a large cedar frame. Visitors to the museum can use a mobile app to learn more about each item.

"There [were] ones that were more difficult to think of and to reconcile inside your mind, but all of them told part of the story," Newman said.

"So for me, it was about that story and that storytelling and about sort of taking each item and and each story that came with it and representing it as directly and honestly as possible."

A door reclaimed from a residential school site in Alert Bay, B.C., is left open to let visitors to walk through the display to a multimedia presentation on the other side.

An eight-minute documentary about the Witness Blanket project plays in the museum with the installation.

As well, the museum is launching a "reflection wall" where visitors can add their thoughts to a word collage that resembles the blanket.

Newman said he has seen varying reactions to the Witness Blanket among residential school survivors, with some feeling pain and others feeling uplifted.

"I think what it shows for a lot of survivors is how similar the story was all across the country, because when you think about yourself and your own experience, you don't necessarily connect it to everyone else's," he said.

"When you see how similar the pieces and the stories are from sort of sea to sea to sea, then you start to see that it really was a really big thing and that there's a lot of connections out there."

Working on the project has had a personal impact on Newman, who travelled with his father to the school that he attended.

"It was his first time going back to the school site since he was a young boy, and it was a really powerful moment for our family, because we could watch my dad walk through that space and sort of reclaim it in a way," he said.

"The things that he was saying, the things he was noticing was how different it is and how much smaller it seemed now … so at the beginning of the day, he was really grouchy and really on edge, and as the day progressed, you could see the weight lift from his shoulders and a spring getting to his step, and I think it was like a real moment of reconciliation within our family."

The Witness Blanket has been touring the country since January.

It will be on display in the expressions gallery at the Canadian Museum for Human Rights until June 26, 2016.

Newman said he hopes the Witness Blanket will find a home at the Centre for Truth and Reconciliation at the University of Manitoba after it finishes touring.