Broom-making workshop helps dispel 'misconceptions about what a witch is'

The free public event gave people from all walks of life a chance to get creative and learn about the history of witches.

"One of the main reasons that we do public ritual, beyond connecting people with similar spiritual values, is it's an opportunity for us to dispel some of the popular misconceptions about what a witch is," said volunteer Susanne McCrea.

The broom-making workshop was hosted in the lead up to Samhain, the ancient Celtic new year celebration of ancestors that transformed into Halloween.

As brooms are used to sweep dust and dirt in the home, they also hold significance on a related symbolic level, McCrea said.

"To bring in the new year, we're sweeping away all the old energies that no longer serve us," she said.

Rachel Bach said she attended the workshop out of curiosity and an interest in fusing elements of her traditional Indigenous culture with Wiccan rituals.

McCrea said the history of the witch is tied to women's rights, as the word was used to exercise power over women hundreds of years ago.

"During that time, the wise women, the medicine women, the healers were killed as witches. So we take that name back fully knowing that our ancestors never would've called themselves that," McCrea said.

"The kind of work that they did was simply part of their community work. It was the way they participated in a tribal community.

McCrea said the present-day connection between witches and Halloween is one of "a terrifying bunch of old crones" that she says is offensive.

"The idea of women's power is not only feared in our society, but it's also ridiculed, dismissed, and devalued and the lives of women are devalued as well," she said.

"When we do this kind of public ritual, we're doing that to bring it back to public awareness to think about the history, not to take away anybody's fun."

The appeal of reclaiming the image of the witch and broom wasn't lost on Payton Chammartin and her mother, Krystall Levesque, who both attended the workshop.

The group of broom-makers will come together again Oct. 30 at Vimy Ridge Park for an open circle Samhain ritual. 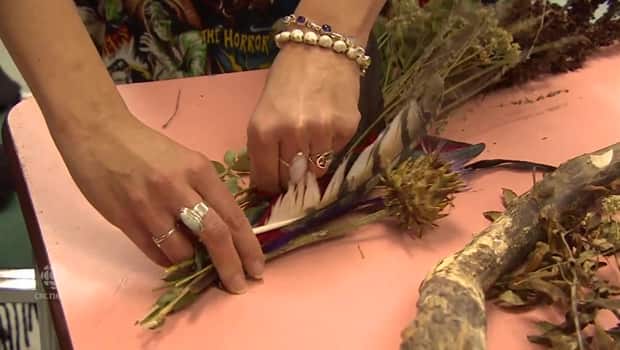 Broom-making workshop helps dispel 'misconceptions about what a witch is'