Winter warrior: Learn how to run in the cold from experts who say it's more fun than you think

If you’ve got the right gear, Lindsay Somers says running in the winter makes you feel like a warrior.

You may be tempted to stay inside on dark winter days, so here are some tips to get outside

If you've got the right gear, Lindsay Somers says running in the winter makes you feel like a warrior.

"There's this victory.… I'm, like, in this secret spacesuit and no one knows who I am and it actually is … the most empowering, exciting thing," she said.

"Your win at the end of a winter run is the biggest sense of accomplishment you could ever feel after a workout."

The lifestyle health coach has been running for two decades, but she transformed her relationship with Winnipeg winter seven years ago when she bought a nice base layer and high-quality wool socks, and started doing it outside in the colder months, too.

"It was a total game changer for my mental health," she said. "I wanted that fresh air, I wanted to go outside."

If you're short on inspiration or motivation to get moving outside on dark, chilly winter days, Somers and other enthusiasts say there's a growing community of winter runners and it's way more fun than you think — especially if you go into it armed with a few tips and tricks.

"This is one of the most amazing tools I can use to really embrace and not be scared of winter," she said.

"You have to just go out there and dress for it and embrace it and be active."

John Stanton, the founder of the Running Room fitness store chain, said he's seen running in general grow across the country as the sport becomes more inclusive, and winter running is no different.

He says there's a "special joy" in being the first to make footsteps in freshly fallen snow.

His No. 1 tip for getting started is to embrace a lower-intensity workout.

That means running at a slower pace with slower acceleration and deceleration, and shortening your stride to accommodate for snow or ice underfoot, he said. You might feel more soreness after, he added, because of the extra work to run through freshly fallen snow.

Jean-François Bérard, a physiotherapist, part-owner of Pure Lifestyle in Winnipeg and a winter runner himself, said experts call the ability to run in different terrain "physical literacy," and it's a valuable asset.

"It's actually a very good form of exercise … and you're actually strengthening your ankles, your feet and even all the way up into your hips and your lower back, because of all the negotiating that your body has to do to tolerate those new forces," he said.

Staying hydrated — an exercising basic — is a little harder, too. Your water might freeze, so stick your bottle inside your coat, Stanton recommends.

You also still have to warm up but that can take on a winter twist, as well.

"You can have some fun. Build a snowman in the fresh snow — call it cross-training, if you like," he said. "If you're out running with a group, you can make a snowman or have a snowball fight, and it's a great way to just loosen up before you get going and building that run."

Dennis Cunningham, the director of the roughly eight-kilometre Frostbite River Run — a fundraising run held every January in Winnipeg — also stressed the importance of warming up, and not just at the start of your workout.

After your run, you should make an effort to increase your body temperature by going somewhere warm or putting on extra cozy layers, he said. He remembers skipping this step once before going to give blood and being told he was too cold to donate.

Cunningham also recommends running with a partner to stay safe and keep motivated.

"I enjoy winter running on my own but I also like running with a partner — just for the companionship, but also in case something happens," he said.

If you do run alone, Stanton suggests carrying a cellphone and running in loops around your house. "That way, if something goes wrong, you're close to home."

With all that in mind, you're ready to go — as long as you're properly dressed.

Somers recommends starting with a synthetic base layer — cotton will get chilly and wet as you sweat — and finishing with a windbreaker layer on top and bottom. In between, it's dealer's choice, depending on the weather — thick wool for colder days or a lighter synthetic top for warmer ones.

Make sure you've got a headlamp or something reflective, too, Stanton added, so you can be seen in low winter light. 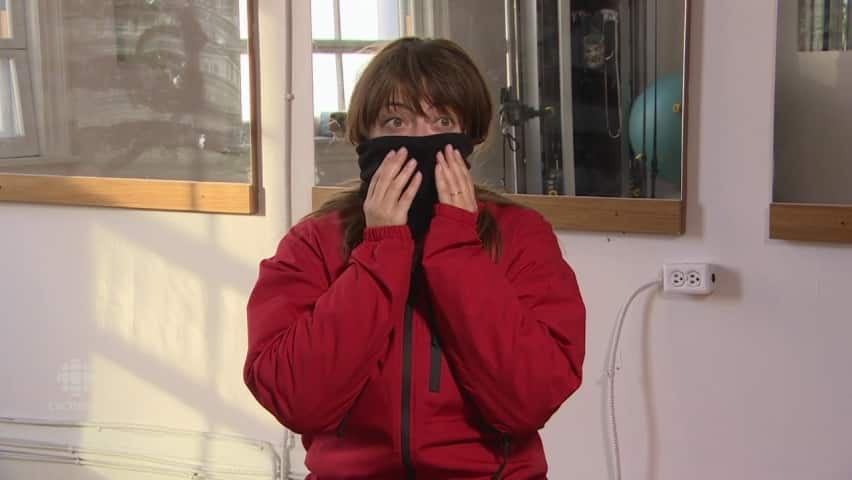 What to wear winter running

3 years ago
1:47
Lifestyle health coach Lindsay Somers runs a winter learn-to-run clinic in Winnipeg, and shared some tips on how to dress for the weather before hitting the trails. 1:47

What you really need to be worried about are your head, hands and feet, Stanton said. Grab a hat or balaclava, and on the chilliest days opt for mittens over gloves.

Somers likes to run in regular runners over socks — her favourite are from SmartWool — but you can also wear trail runners for better traction or add ice picks for the seriously slippery areas.

For the exposed skin left over, Stanton recommends applying Vaseline or an anti-chafing cream like Body Glide to take the sting out of the cold air.

Don't be fooled by sunny skies either, Cunningham warns. You'll still get cold on a clear day, and if your route takes you onto the frozen rivers, it'll feel even colder.

'Crystal and diamonds on the snow'

Once you're ready to hit the trails, Somers says you've got lots of beautiful options.

"The city is quiet in winter," Somers said. "The sun, it's so bright … it just glistens, and you have all this crystal and diamonds on the snow. There's so much peace in that."

She loves running on the frozen river, or from her studio in the Exchange District to The Forks.

Bérard said you should check the weather before you head out so you can dress properly and choose an appropriate route. If you take precautions, it's never too cold to run safely in Winnipeg, he said, but you should take environmental factors into account as you plan.

Terrain will be a little different every day, he said, so don't assume the path you ran a week ago will still be the same experience. Stanton recommends running into the wind as you start so you can finish with it at your back.

Winnipeg and Manitoba are full of running trails, Bérard said, and that's where he recommends people run. Some of his favourites include the Assiniboine Park and Forest trails, the Spirit Woods trails and the Seine River Trails.

If you'd rather run in a group, or just want to take part in an event or two, there are a handful of ways to do it, including the Frostbite River Run, the Hypothermic Half Marathon , the one- or five-kilometre Resolution Run  and, for more experienced folks, the 125- or 162-kilometre Actif Epica.