Runners laced up at Assiniboine Park to mark the life of a Winnipeg woman who lost her battle with brain cancer this week.

Joanne Schiewe was active in the city’s running community 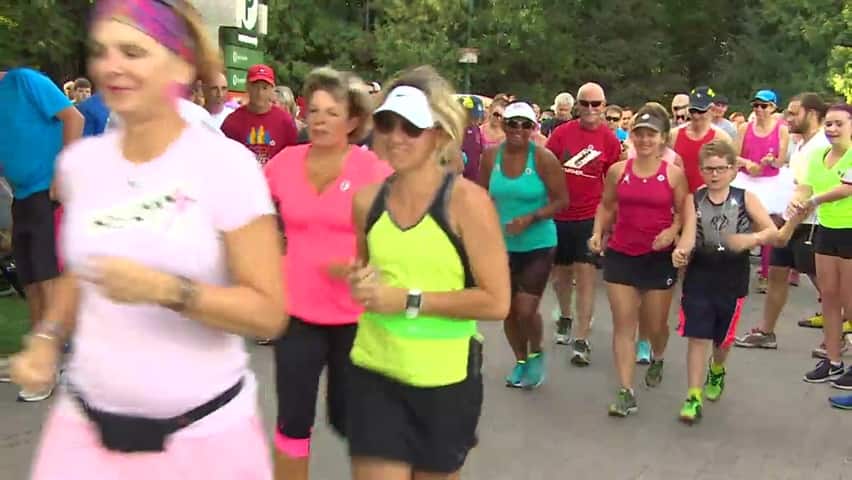 5 years ago
1:04
Dozens of people came together to hug, reminisce and run in honour of Joanne Schiewe, who died on Monday. 1:04

Runners laced up at Assiniboine Park to mark the life of a Winnipeg woman who lost her battle with brain cancer this week.

Dozens of people came together to hug, reminisce and run in honour of Joanne Schiewe, who died on Monday.

Schiewe was an avid runner and well-known athlete in Winnipeg. She was inducted into the Manitoba Runners' Association Hall of Fame for contributions she made to the community.

Schiewe, who recently celebrated her 36th birthday, lived just past the six to 18 months she was told she would likely survive after being diagnosed with glioblastoma.

"It's amazing that all these people came out but actually it's not surprising because I would expect nothing less," Michael Bennett said.

Bennett met Schiewe around seven years ago and worked with her on Ted's Run for Literacy. He started the "Buttons for Jo" campaign which has raised more than $3,000 for brain cancer research. Buttons with "Jo" on them are being sold for a minimum donation of $5 and all of the funds will go to Schiewe's charity of choice, Brain Tumour Foundation of Canada.

Bennett said Schiewe was a remarkable athlete and amazing person to work with.

"Everyone who knows Jo knows what a spark she is and what a tremendous athlete she is," he said.

Scott Thomson also met Schiewe through Winnipeg's running community about 12 years ago. He said Shiewe's drive to raise awareness for brain cancer while her health declined was inspiring.

"Too often when we are confronted by very difficult things we tend to crawl inside our own little shell. Jo wouldn't do that, Jo obviously didn't do that," he said. "I think she just did tremendous work."

Mayor Brian Bowman spoke to the runners before the five kilometres jog and said he had worked with Schiewe previously at a lawfirm.

"It wasn't until recently, with her battle, that I had the chance to really get to know her a little bit," he said.

"The strength and the courage that she demonstrated was absolutely remarkable."