Some Winnipeg residents have taken a look at the city's plans to build the Plessis Road underpass, which aims to ease traffic congestion in the Transcona neighbourhood. 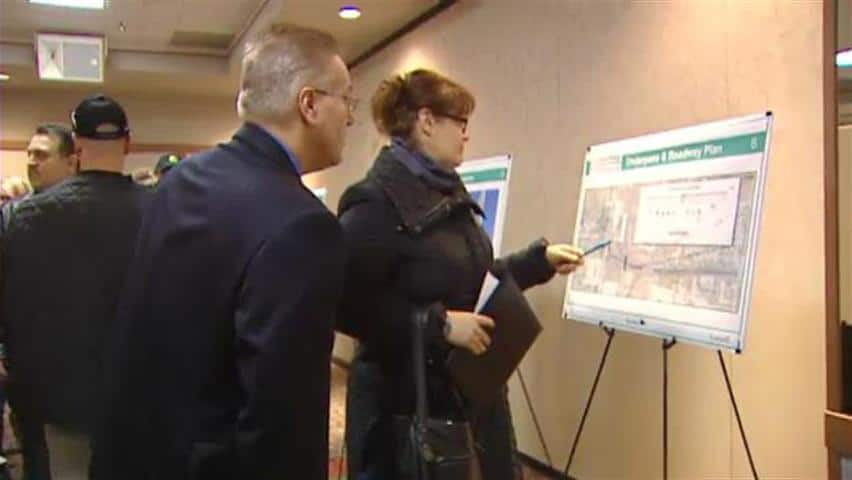 8 years ago
1:16
Winnipeg residents check out the city's plans to build the Plessis Road underpass, in a bid to reduce traffic congestion in Transcona. 1:16

Some Winnipeg residents have taken a look at the city's plans to build the Plessis Road underpass, which aims to ease traffic congestion in the Transcona neighbourhood.

At an open house Thursday evening, the City of Winnipeg showed the public the preliminary design of the $77-million underpass, which will be built on Plessis north of the intersection with Dugald Road.

Area residents have long lobbied for an underpass there. Several trains block the railway crossing at the busy intersection every day, resulting in long commute times.

The city will also upgrade Plessis from two lanes to four divided lanes between Dugald Road and Pandora Avenue. As well, bicycle and pedestrian lanes will be built.

Construction is set to begin this spring. City officials say they want to complete the project by the end of 2014.

"It's an aggressive schedule, but that's our target," said Blake Kibbins, a streets project engineer with the city.

Those who attended the open house were generally happy with the plan, but some expressed concern with the potential impacts of construction.

Boisjoli, who owns Murdock Garden Market near Plessis, said she expects to see fewer customers during that time.

"If people have to take a big detour, they're not going to come," she said.

The federal, provincial and municipal governments are sharing the costs of building the Plessis Road underpass.