Winnipeggers spill onto the streets to spend time outdoors — but apart

His little feet puncturing the water in his rain boots, six-year-old Elliott Smith is having a great time strolling a Winnipeg street temporarily barred to vehicles, even if he doesn't say it.

Pedestrians, cyclists given free rein on 4 streets closed by the city to promote physical distancing

His little feet puncturing the water in his rain boots, six-year-old Elliott Smith is having a great time strolling a Winnipeg street temporarily barred to vehicles, even if he doesn't say it.

"I don't like it because then we can't drive," the boy declares — who is a decade from owning his own driver's license.

But Theo, his older brother, wasn't quite buying it.

"Elliott, what do you think people have feet for?" the eight-year-old piped up, his own feet splashing puddles along Wolseley Avenue, right ahead of his brother.

Until then, he'll have to settle — like everyone else — with using his own two feet.

On Monday, the City of Winnipeg closed sections of four streets, including Wolseley Avenue, so they can become a pavement playground — while still allowing for the recommended two metres of physical distancing between people — for those cooped-up during the coronavirus pandemic.

"I'm surprised that it's taken the city this long, actually," says Laura Cameron, joining a friend for a lunchtime walk.

"Especially in this neighbourhood," she says, "pedestrians have taken over the streets now that people are at home and they need to get fresh air and exercise."

Drivers and pedestrians have had a fraught history sharing the road, even as streets like Wolseley Avenue have emptied since health officials have urged people to stay home whenever possible.

"Just the other day, someone was honking at us for walking on the street, came up behind us and unrolled their window and yelled at us," Cameron says. 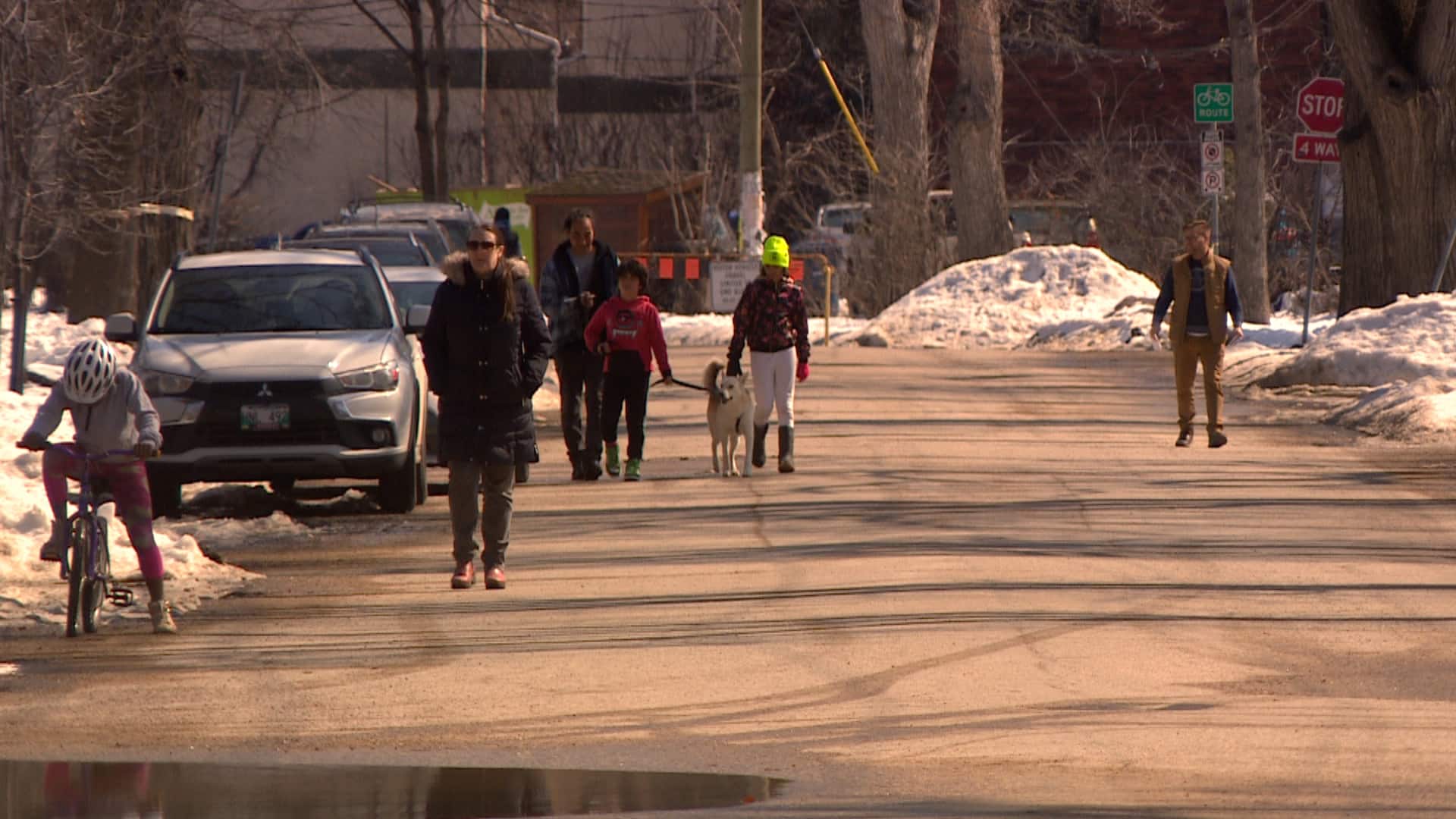 Streets turned over to pedestrians

10 months agoVideo
1:30
Wolseley residents speak highly of the city's decision to surrender one of their streets to cyclists and pedestrians to encourage residents to stay apart from each other during the COVID-19 pandemic. 1:30

She would otherwise be relegated to the sidewalk, which isn't good enough in an age of staying apart, she says.

"A sidewalk is not six feet wide and you would have to walk into a really awkward single file, which is challenging to do and then when you come across someone, there's no way to deal with it."

Motor vehicle traffic is now restricted to one block, before they must turn away.

Opened roads are making it easier for people to stay apart while enjoying the outdoors.

It gives Samara Froese a new place to read. Sometimes, she reads while walking, and now she can bury her head in a book while hitting the street.

But don't worry — she lifts her head enough to see vehicles, or potholes down below.

"Now that the signs are up, I will definitely try and be out even more," she says. "It's nice to not be splashed [by vehicles], because that's gross."

Monday, which saw Winnipeg reach a high of 12 C, turned out to be the perfect day for Mackenna and Javelin Robertson to stay two metres apart from their other sister, Sequoia.

They're divided by households — Sequoia, 17, is a live-in nanny and is thus living apart.

The street allowed the trio to stretch out across almost the width of the street to walk and talk.

"We are trying to distance ourselves from Sequoia, which is tricky," says Mackenna, the oldest sister.

"It's fine," Sequoia says when asked about her sisters' tactics. "I don't like them anyway," she jokes, eliciting giggles all around.

'The best walk I've had'

Bryan Hill is savouring his walk under warm skies and without a car to be seen.

"Oh man, this is the best walk I've had," says Hill, his grin wide as his poodle struts beside him. He's made daily walks part of his new routine, since he cannot visit the gym.

Hill has lived in other neighbourhoods, but says there's something about Wolseley that gets people walking and biking.

"It's the one thing about Wolseley that's really distinctive," he says.

They start them young in this Winnipeg neighbourhood. It was 8-year-old Nora Alexander, who was the first in her household to notice the vehicle barricades.

"I saw those signs and I was like can we go on a bike ride," she says to her mom. "And she says yes."

The city has also turned over the following three streets to pedestrians:

The city was initially planning to convert all four of those streets for pedestrian use every Sunday this summer. The early debut will continue every day until at least May 3, the city said.