'They could no longer sit idly by': Wet'suwet'en solidarity round dancers shut down Portage and Main

Demonstrators in Winnipeg shut down the Portage and Main intersection on Wednesday with a round dance in support of the Wet'suwet'en hereditary chiefs who oppose a pipeline running through their territory.

A round dance in support of Wet'suwet'en hereditary chiefs who are opposed to a pipeline running through their traditional territory shut down Winnipeg's Portage and Main intersection during rush hour Wednesday.

About 200 demonstrators chanted, sang and pounded drums in a circle, as others held hands and danced around them, bringing traffic from all directions to a standstill.

Signs carried by the demonstrators included messages such as "Manitoba supports Wet'suwet'en," "Wet'suwet'en strong" and "RCMP out of Wet'suwet'en."

"Stop the war on our women and our children, and jailing and imprisoning our land protectors," a woman holding a cardboard sign yelled. "That's our rule of law." 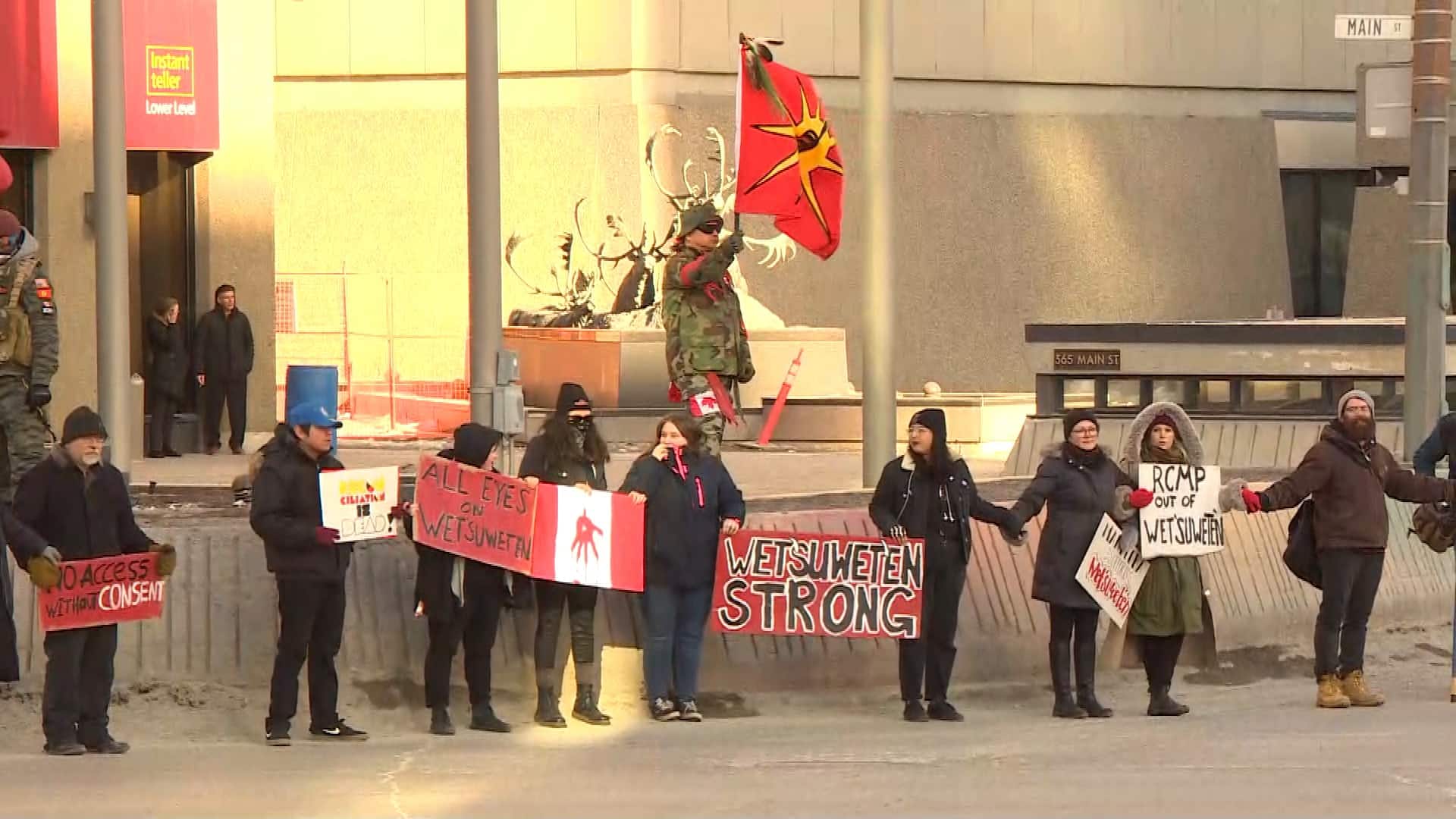 Demonstrations and transportation disruptions have spread across the country in recent weeks, as demonstrators protest in solidarity with the Wet'suwet'en hereditary chiefs who oppose a $6-billion Coastal GasLink natural gas pipeline project in northern B.C.

In Manitoba, that included an 11-day long demonstration by a group called Indigenous Youth for Wet'suwet'en at the office of Winnipeg Liberal MP and Minister of Northern Affairs Dan Vandal, which ended on Feb. 17.

New demonstrations began on Tuesday, the day after police arrested 10 protesters at a rail blockade near Belleville, Ont.

In Winnipeg on Wednesday, police were at the Portage and Main intersection directing traffic, the City of Winnipeg tweeted. The demonstration affected traffic at several other intersections on Portage Avenue and Main Street, the city said.

La Royce Batchelor said she showed up to support a handful of her former students from Red River College's social enterprise program.

"My students felt that they could no longer sit idly by," said Batchelor, who identifies as Indigenous.

One of the students she rallied behind was Courtney Clemons, who is an organizer with Indigenous Ceremonies Winnipeg & Surrounding Areas, the group behind Wednesday's action.

The main point of demonstrations like Wednesday's, Batchelor said, is that Indigenous communities across Canada feel like their priorities are being dismissed.

"People believe it's fragmented, but this is about reconciliation," she said. "This isn't just about groups of people wanting to be disruptive."

Wednesday's demonstration was a way for Indigenous youth to speak out and stand together, Batchelor said.

"They're having an opportunity to voice their concerns, to cry in frustration, to scream out in joy of being able to gather together," she said.

"We as Canadians can stand together and reconcile. My nation and your nation can be one nation. We don't have to have division.… We're willing to sit down and talk, but it has to be appropriate and informed conversation, and it must involve consent," Batchelor said.

Hundreds near Portage and Main protesting in solidarity with Wet’suwet’en in BC. This is the second protest this week organized by Indigenous youth. They say they understand the frustration Winnipeg commuters are feeling, but they are exercising their charter rights. <a href="https://twitter.com/CBCManitoba?ref_src=twsrc%5Etfw">@CBCManitoba</a> <a href="https://t.co/tRLKPhr5Rl">pic.twitter.com/tRLKPhr5Rl</a>

With files from Marina von Stackelberg and Jorge Barrera