People are out in full force in Winnipeg on Saturday as the city climbs to a record high of 12 C. 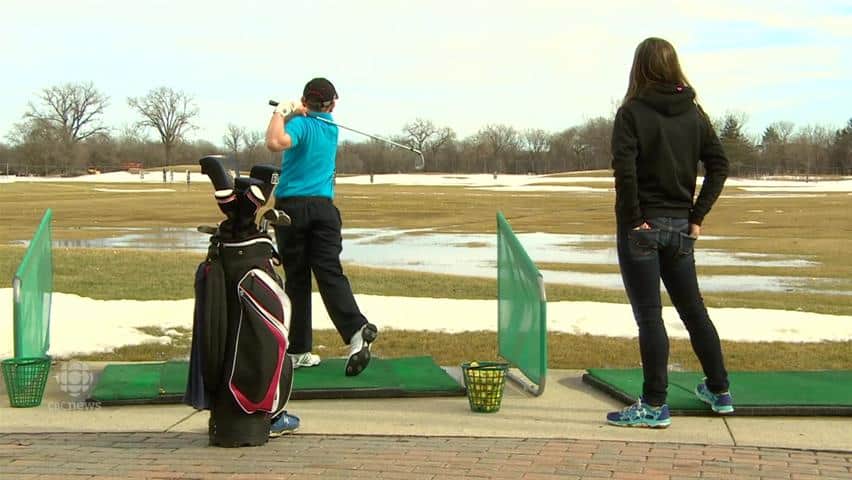 5 years agoVideo
1:16
People are out in full force in Winnipeg on Saturday as the city climbs to a record high of 12 C. 1:16

People are out in full force in Winnipeg on Saturday as the city hit a record high of 12 C.

According to Mike McDonald, a meteorologist with Environment Canada, that's the highest temperature Winnipeg has seen on this day since 2012, when the mercury hit 9.7 C.

"We reached a high so far [on Saturday] of 12 C at the airport; which breaks our old record, which was 9.7 set back in another warm March back only in 2012. So, not a long-lasting record, but we still broke it by more than 2 C," he said.

The mild, spring-like weather allowed Shooters Family Golf Centre on Main Street to open, although the driving range usually stays closed until at least the first week of April, according to owner Guido Cerasani.

"When we woke up this morning we weren't sure if we were going to open and then we decided at nine o'clock let's go for it and it's been steady all day," Cerasani said.

Around 150 people came out to golf on Saturday, he estimated.

"It's wonderful. It gets people excited about golf and that builds momentum for the season so we can only hope that it continues and everyone has a great golf season."

The weather is expected to stick around for a couple of days, according to McDonald.

"We're still in the same air mass so we're looking at temperatures around the 12 C mark again both Sunday and Monday," he said.

"The record for [Sunday] for Winnipeg is 12.2 C so we'll be again very close to a record and on Monday, our record high is 11.4 C so again, next two days will be right at or better than the record temperatures."

But on Tuesday and Wednesday, a weather system from the American Midwest is expected to bring rain or snow showers, taking temperatures down to normal values for this time of year, which linger around –2 C, according to McDonald.

"It will be a shock to the system for sure when we've been outside with short-sleeved shirts. Looking out, the Earl's patio on Main Street is open [on Saturday] so there were people outside enjoying the nice, beautiful spring day," McDonald said.

"Typically, when you get an air mass change from such abnormally warm conditions to back to near-normal, there will be a zone of precipitation in that transition zone between the warm and cool air so we can expect some precipitation."

Winnipeg was not the only western city to reach warm temperatures on Saturday — Medicine Hat, Alta. climbed to 19 C and Regina, Sask. got close to 12 C.

In Manitoba, Emerson was the hot spot, reaching 14.7 C, while Churchill stayed cool at –10.9 C, according to Environment Canada.