Remembering the people from Manitoba on board Flight PS752

Ukrainian International Airlines Flight PS752 crashed shortly after takeoff Wednesday morning in Iran, killing all 176 people on board. Among the victims were 63 Canadians. CBC News has confirmed that at least eight of the victims were from Winnipeg.

CBC News has confirmed 8 of the passengers were from Winnipeg

A Ukrainian International Airlines plane crashed shortly after takeoff Wednesday morning in Iran, killing all 176 people on board.

Among the victims of passenger Flight PS752 were 63 Canadians.

As of right now, CBC News has confirmed that at least eight of the victims were from Winnipeg.

CBC News is trying to confirm the status of other individuals from Winnipeg who may have also been on the flight.

This file is published as a tribute to the victims from Manitoba, and it will be updated as CBC News learns more.

Amirhossein Bahabadi Ghorbani, 21, was a science student at the University of Manitoba with dreams of becoming a doctor.

He was one of five victims CBC News has confirmed so far who has tied to the U of M.

"If I'm being honest, I couldn't sleep for the last two days," said Arman Ahmadi, one of Ghorbani's roommates.

"It's just hard to accept that he's not gonna come back anymore. It's just really hard to believe because we were really close to each other," said the 21-year-old

Ahmadi said he knew Ghorbani for about a year, but they talked on a daily basis. Ahmadi described his friend as generous and caring in a way that not everyone realized.

When Ahmadi was struggling to find a place to stay a few months ago, Ghorbani offered to take him in as a third roommate, he said,

"He told me, 'Just come here,'" said Ahmadi. "He really helped me out with that, and I really appreciate it. I just want his parents to know that your son was a great guy, and we are really sorry. We are so, so sorry."

Ghorbani was attending the International College of Manitoba, a program for international students at the U of M.

"He was trying to go into medicine, and his parents were really supportive about that idea. He was going to do whatever [was] necessary to reach that goal. And we are really sad because of that, because we knew he had so much potential," said Ahmadi.

She worked multiple jobs to provide for her family and had just moved into a new house in Winnipeg with her husband and 11-year-old son.

Naderi and her son were on board the flight that crashed outside of Tehran, CBC News has confirmed.

"My aunt was so very smart. She worked very hard for her family, always provided, had multiple jobs to support her and … to support my uncle," said Kalar.

Naderi was a dedicated tutor who genuinely cared about the children she supported, their families and her colleagues, said St. Amant spokesperson Jennifer Rodrigue in an email.

"We are all devastated by this loss and are holding Farzaneh and her son … in our hearts and thoughts," Rodrigue said.

Naderi's husband, Abolfazl Sadr, is currently en route to Tehran to identify the bodies, provide DNA samples and plan for the funeral.

Noojan Sadr, Naderi's son who was also on the flight, was described by Kalar as being a talented soccer player, who loved playing with her dog and doing crossword puzzles.

He was mature for his age, she noted.

"He was the brightest kid. His aspiration was to do something in technology and work for Google, or work for any one of those big companies. He really was such a smart 11-year-old kid," she said.

"It's hard to wrap your head around that such a small kid lost such a big life."

Noojan and his mother had flown to Iran for the holidays, and were trying to get back to Winnipeg when the plane went down.

Friends and family are gathering to honour the mother and son Thursday night in Winnipeg.

Mohammad Mahdi Sadeghi, who went by Mahdi, was a civil engineer working at a Winnipeg-based construction company called Fresh Projects.

Sadeghi was a project administrator at the firm, who made sure project documents were organized and completed.

His role was to estimate project costs, ensure the right materials were being used, and make sure everything ran smoothly throughout construction and was going according to plan.

Fresh Projects owner Janice Froese told CBC News she will be speaking with Sadeghi's family, who do not live in Winnipeg.

Like her husband, Bahareh Hajesfandiari was a civil engineer. She worked for Marwest Construction, a firm in Winnipeg.

"Bahareh was soft-spoken and kind to everyone. Despite her shyness, she quickly built meaningful relationships with many people," said Armin W. Martens, president for the Marwest Group of Companies.

"Every conversation with her was a real conversation. She was immensely capable but the lasting impression will be the joy she brought us all. We will miss her tremendously."

Prior to working at Marwest, Hajesfandiari worked at the Manitoba Interfaith Immigration Council on Bannatyne Avenue.

Anisa Sadeghi, 10, was the only child to Madhi Sadeghi and Bahareh Hajesfandiari.

Anisa was a Grade 5 student in the Pembina Trails School Division, it confirmed Tuesday

"She was a cute one, really kind and a nice kid," said family friend Montazeri, adding that Anisa used to play with his kids and participated in sports like karate.

"Everyone is heartbroken now," said Montazeri, speaking generally about the family of three.

"I think they were very successful immigrants here in Canada."

Described as a promising scientist, Khadem graduated from the University of Manitoba in 2016 with a PhD in immunology.

That same year, Khadem was featured as a CBC Manitoba Future 40 nominee — which celebrates leaders, builders and change-makers under the age of 40 — for her research in developing immunity to a deadly infectious disease called leishmaniasis, and successfully identifying a new drug target for treating the disease.

Her findings were published in five journals, with one being highlighted on the cover page of a prestigious journal.

"I am utterly devastated and trying to grapple with this," said Jude Uzonna, an associate dean at the U of M's faculty of health sciences who teaches immunology.

"Forough was one of my best PhD trainees, an outstanding scientist and above all, an amazing human being."

Khadem was in Tehran — the capital of Iran — to visit family who still live there, Uzonna said.

Khadem texted him Tuesday evening to say she was leaving Tehran. The message turned out to be the last contact he had with her.

She will be missed dearly! Our humanity lost a beautiful soul ... Rest in Peace my dearest friend and sister! My deepest condolences to the families and friends of all the victims of this tragic plane crash. May God grant us strength as we all go through this difficult time

The University of Manitoba is deeply saddened by the tragic news coming out of Tehran. It is our understanding that there were UM students and an alumna on board the flight.

Zahra Moussavi, biomedical engineering professor at the U of M, also knew Khadem.

"She was really a gem," Moussavi said. "A real personality, despite many hardships. She was always laughing. Extremely cheerful."

Khadem was working as a business development specialist in Winnipeg for Mitacs Inc., a Canada-wide not-for-profit.

"We are deeply saddened to hear that Forough Khadem was on Flight PS752 today. We extend our deepest condolences to Forough's family and friends," said Eric Bosco, chief business development officer for Mitacs.

"We will remember Forough's passion for Mitacs, enthusiasm for innovation in Manitoba, and her positive outlook on life. We will miss her humour, her kindness and her warm spirit."

Amirhossein Ghassemi had been living in Winnipeg for just over a year to pursue a master's degree in biomedical engineering at the University of Manitoba.

He was on his way back to Winnipeg after attending a family reunion in Iran.

"I lose a brother," said his friend and fellow master's student Morteza Tavakoli.

"Everywhere that we went, we were together. He was like a family to me."

Tavakoli described Ghassemi as "helpful to everyone he met" and being optimistic toward the situation in their home country.

The two were texting each other just mere moments before Ghassemi boarded Flight PS752, Tavakoli said, adding that he warned his friend to be careful.

"I told him, once you're on board, everything will be over. I was referring to worries," Tavakoli said, his voice breaking. "But I didn't really know that his life was about to be over."

Before immigrating to Canada, Ghassemi was a physician in Iran, where he helped a number of people in a remote, southern part of his hometown of Kerman, said Tavakoli.

Moussavi was Ghassemi's co-advisor at the U of M. She said it was a pleasure having him as a student.

"He was always cheerful and he worked so hard," Moussavi said, adding that he complained often about her courses, "but he managed to get As."

Ghassemi was researching the detection of epileptic activity by tracking a person's brain waves during their sleep, she said.

Apparently he was engaged and planned on going to Iran for the wedding next summer, before returning to Canada with his wife, Moussavi said.

"I'm still very shaken," she said. "When it happens to people that are so close to you — especially that they're all young — it is so hard to believe and cope." 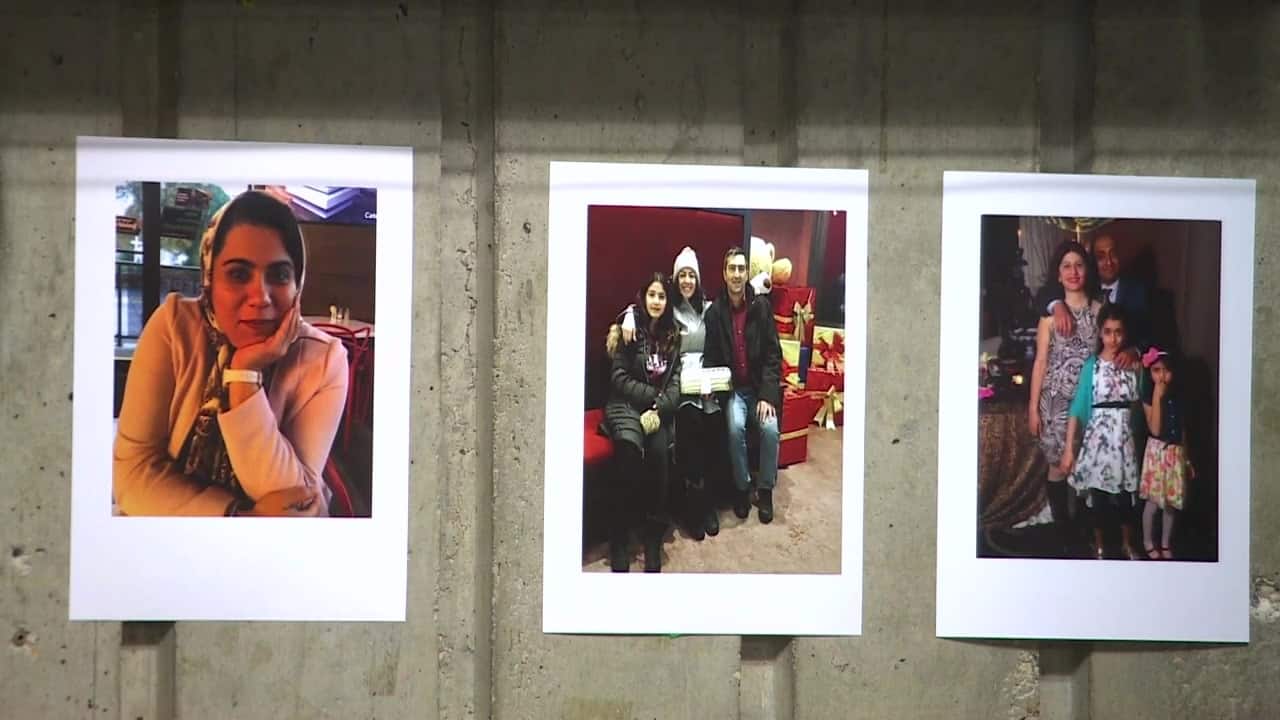 Manitobans on board Flight PS752

10 months ago
2:41
CBC News has confirmed that at least six of the victims were from Winnipeg. 2:41