1 arrested in lead-up to Trans March in Winnipeg

A 22-year-old Winnipegger who identifies as transgender was arrested on Saturday in the lead-up to a march in support of transgender people as part of Winnipeg's Pride festival.

A 22-year-old Winnipegger who identifies as transgender was arrested after filming police during a clash between opposing protest groups ahead of the city's first march in support of transgender people.

The arrest happened around noon across the street from the legislative grounds, where the Trans March was set to begin at 2 p.m. as part of Winnipeg's Pride festival. A video circulating on social media captured the arrest, and shows a police officer forcing an activist onto the hood of a police cruiser in the process.

At the time, around a dozen people not aligned with the Trans March were at the grounds protesting Motion 103, a federal motion condemning Islamophobia and religious discrimination.

The group was opposed by members of several Winnipeg anti-fascism groups who went to the grounds to counter-protest and support the Trans March, including Fascist-Free Treaty One, the American Indian Movement, the Urban Warrior Alliance and the Crazy Indian Brotherhood. Among them was the 22-year-old activist who got arrested. 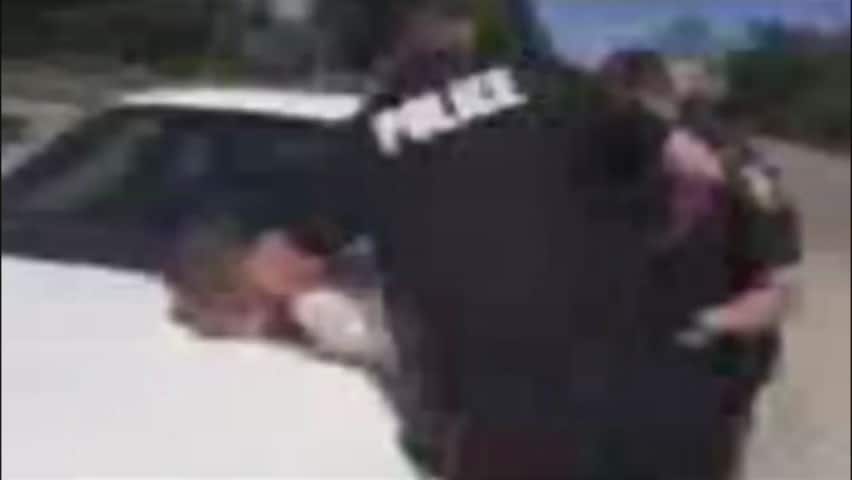 The activist told CBC News they use the pronoun they instead of the gender-specific pronouns he or she. They declined to speak about the incident on the record on the advice of their lawyer.

Omar Kinnarath of Fascist-Free Treaty One was also present. Kinnarath says the opposing groups clashed verbally, and some members began pushing and shoving each other.

"Nothing you wouldn't see in a hockey fight," he said. "…Just lot of pushing and shoving, nothing too crazy."

When police arrived at the grounds, Kinnarath said they started talking to the small group of anti-Motion 103 protesters first. That's when the 22-year-old activist started filming the exchange on a phone — standard practice at protest events, Kinnarath said.

"[The activist] was not doing anything illegal," Kinnarath said. "[They were] just doing what we are supposed to do, anytime that there's a protest or a counter-protest, is film, not only the other side but also the police, because of, you know, situations like this."

The 22-year-old was charged with obstruction of a peace officer and released on a promise to appear in court. At that point, they returned to the Trans March.

At the legislative grounds, they addressed participants from the steps.

"… While incarcerated, I experienced many microaggressions. I was misgendered repeatedly. I was asked what genitals I had. It was a really humiliating experience," they said.

Police invited to Pride parade, asked not to wear uniforms

The arrest comes on the heels of a nearly year-long discussion between the Pride Winnipeg organization and local LGBT groups and community members about the effect of uniformed police presence in the Pride parade.

A survey conducted by Pride Winnipeg and completed by 600 people in the LGBT community found that many within the community have had negative experiences with police. A Pride organizer told CBC News last month that feedback was especially common among trans people and two-spirited people, as well as LGBT people of colour.

After the survey, Pride Winnipeg and a handful of other groups announced police would be able to participate in the parade, but asked officers not to wear their uniforms. Pride organizations in other Canadian cities including Toronto and Vancouver have brought in similar rules for their parades this year.

Shandi Strong, a Winnipeg advocate for trans rights and one of the organizers of the Trans March, said the arrest highlights the importance of events in support of transgender people.

"It's necessary for trans people to be visible, and it's necessary for police and other people in the world to be educated as to who we are, what we're all about so that the prejudices disappear," she said.

She hopes the arrest can be used as a learning opportunity for police going forward.

As part of Pride's decision on allowing officers to participate in the parade, the organization committed to working with the police service and challenged the service to improve education, outreach and engagement with the LGBT community.

Strong said the Trans March itself was still a success, with a larger turnout than she expected of trans people and allies.

"That shows the courage that the trans community and our allies and supporters have," she said.

"I think that when something like this happens, it's a wake-up call. And our allies and supporters that were witnesses to the aftermath and understand the problem will just become stronger allies and stronger supporters, because this should not have happened.

With files from CBC's Erin Brohman and Aidan Geary