One of the worst kept secrets in Winnipeg was confirmed Wednesday, that the city will host the 2015 Grey Cup. 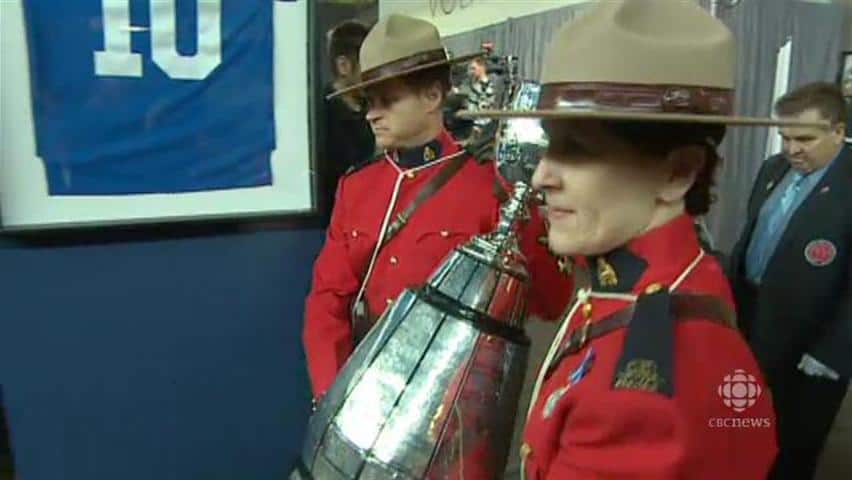 7 years ago
2:03
CFL commissioner Mark Cohon made the announcement at the Pinnacle Club at Investors Group Field, calling it "The worst-kept secret that has been in the province for a while." CBC's Chris Glover reports. 2:03

Winnipeggers dust off your hosting hats. The 2015 Grey Cup is on its way.

CFL commissioner Mark Cohon made the announcement at the Pinnacle Club at Investors Group Field, calling it "The worst-kept secret that has been in the province for a while and I think across this country. So here we go," he said.

"I'm proud to announce that the 103rd Grey Cup, in 2015, has been awarded to the Winnipeg Blue Bombers, the city of Winnipeg, and the proud people of Manitoba. Congratulations"

Cohon said the Bombers' new home is the perfect place for the event.

"I'm obviously very proud about this announcement today, because this gives a great opportunity to showcase the modern CFL in our premiere event, in a beautiful, modern Investors Group Field."

Winnipeg Blue Bomber CEO Wade Miller said Investors Group Field capacity will grow to 41,000 from 33,000, with temporary seats in both end zones. He added a renovated indoor press box will be ready, as well.

Miller said Grey Cup festivities will centre around Winnipeg's downtown, but the stadium at the University of Manitoba will also host events.

"I don't want to speak too early," he said. "But we may try to break a record for tailgating." He promised more details on that down the road.

Miller said the football club expects to spend $4 million on the event, which includes a hefty hosting fee.

"I'm not commenting on what the hosting fee is," he said. "The CFL did very well in its negotiating with us."

But Miller said the event will also generate $3 to $4 million for the team.

Premier Greg Selinger said the province will contribute $4 million to bringing the Grey Cup to Winnipeg, and another $3 million to winterize the stadium, making it available for more events.

"It'll lower the operating costs for the Bombers," he said. It'll allow the building to be used on a more regular basis, all year round."

That brings into sharper focus plans that Winnipeg will host an NHL outdoor winter event.

True North Sports and Entertainment, which owns the Winnipeg Jets franchise, confirmed in December that Winnipeg will host an outdoor NHL game, either the Heritage Classic or the Winter Classic, at Investors Group Field during the winter of 2015 - 2016.

Bomber CEO Miller wouldn't confirm it, but he did hint the stadium improvements would benefit a hockey event.

"There could be other uses of the facility such as a hockey game," he said.

Businesses near the stadium thrilled

Jon Webster, general manager of the Boston Pizza on Pembina Highway is one of the businesses expecting to cash in on the Grey Cup.

"Hopefully, we're in the Grey Cup," he said. "[But] even if we don't make it, we're going to have some really great Winnipeg fans out to support."

There are hopes the event will attract even more out-of-town fans to see the new stadium.

Bomber fan Libby Hanna said Winnipeg has a lot more to offer visitors now than it did in 2006.

"From touchdown til they leave, they would really enjoy the experience and if they were here the last time, they'll have a lot to compare," she said.

The economic impact of hosting the Grey Cup may not be as much as organizers and governments might think.

Victor Matheson, an economics professor at College of the Holy Cross in Worcester, MA, has looked into just how much money is actually kept in communities that host large sporting events.

"When you actually go back and look at these events you usually see numbers that are a fraction than what was claimed in the first place," Matheson said.

The College conducted a study of cities that hosted the World Series of baseball, the National Football League's Super Bowl, and the National Hockey League's Stanley Cup. The study found real economic impact is quite a bit less than what organizers advertised.

"A good rule of thumb that economists do, is to take whatever the boosters are telling you, move the decimal point one place to the left, and that's your actual real economic impact."

Matheson said one of the reasons is that much of the money spent on hotels and restaurants only bounces back out of the city to corporate head offices, and rarely makes it to front-line staff.

CBC meteorologist John Sauder said the average daytime high around Nov. 29 is about - 4 C, and the average low is approximately - 13 C.

But he said the weather in Winnipeg in November can go either way, noting the temperature for the Grey Cup kickoff in Winnipeg on Nov. 22. 1998 it was a balmy 9 C.

The Bombers have never played in any of the Grey Cup games hosted in Winnipeg.

Whether the team makes it to the championship game is the big question.

Cohon said the pressure is on the Bombers now, and noted that for the last three years, the host city has won the cup.