Fewer may be fed this Thanksgiving, as Winnipeg's shelters, food banks limit access due to COVID-19

Food banks and shelters are grappling with how to follow COVID-19 protocols in Winnipeg while making sure those who are less fortunate get a hot Thanksgiving meal next weekend.

Siloam Mission's annual Thanksgiving dinner for those who are less fortunate in Winnipeg is usually preceded by a media campaign advertising the day and time — but not this year.

In fact, the shelter isn't publicly announcing which day it will be having its sit-down holiday meal — a celebration which typically draws more patrons than Christmas — in order to avoid a big influx of people.

With past holiday meals, "when we publicize it, we sometimes get extra people that day who normally wouldn't be using our services," said Siloam communications manager Luke Thiessen.

"And we just don't want to crowd any more than we have to when we serve that meal."

They have to avoid a crowd this year because of Winnipeg's concerning COVID-19 numbers, and restrictions in place as the city and surrounding area are at the orange, or "restricted," level on the province's pandemic response system. 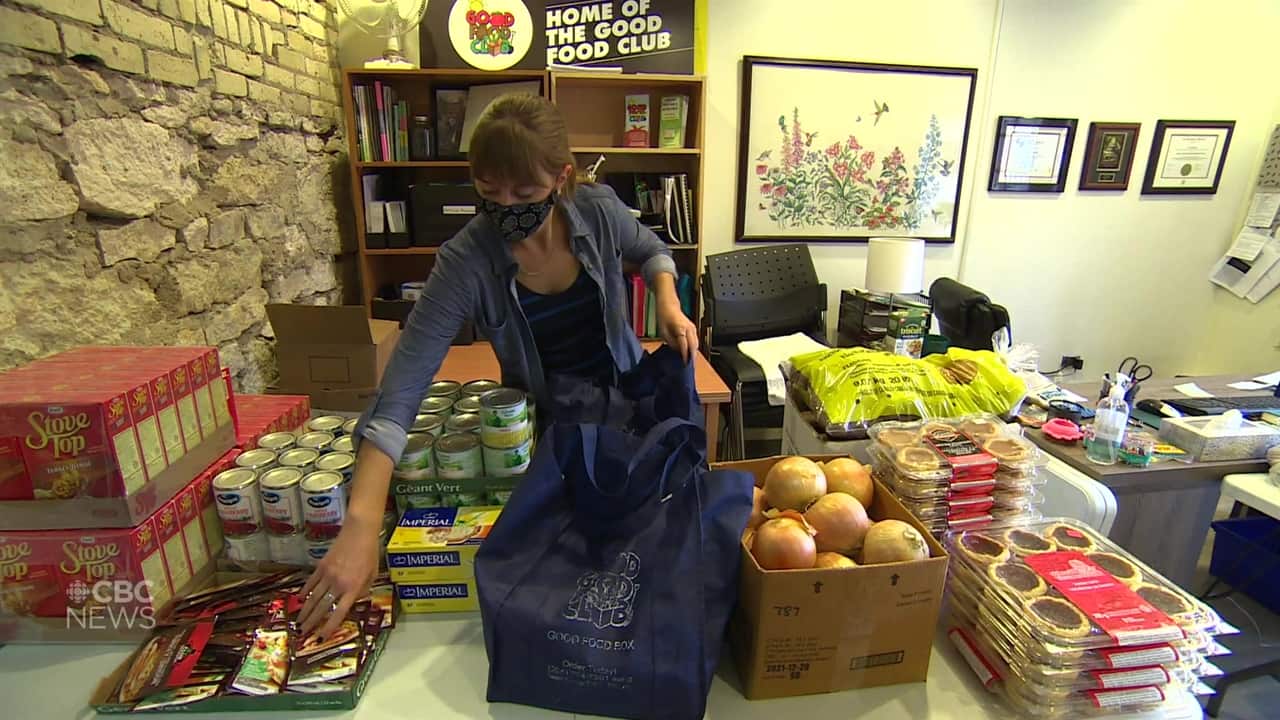 16 days ago
2:16
Fewer of Winnipeg's vulnerable population will be fed this Thanksgiving as shelters and food banks limit access because of COVID-19. 2:16

In light of that, Siloam is trying to be as cautious as possible. Priority for the sit-down Thanksgiving meal is being given to those who already stay at the shelter, which is roughly 100 people.

The dinners are just so important for folks who are isolated and don't have the opportunity to get out much- Nicole Sward, West Broadway Community Organization

Another 300 who visit Siloam on a daily basis won't be allowed inside, but they will get a hot meal to go. That's about half of the 700 to 800 people who were fed a sit-down turkey dinner with all the fixings last year.

"Moving to the orange phase has been a real extra challenge, in terms of realizing we definitely can't increase numbers on that day. If anything, we have to decrease and find ways to get those meals out the front door," said Thiessen.

He acknowledges planning large-scale meals during a pandemic hasn't been easy, but says it is manageable.

Agencies that provide social services are exempt from the 10-person gathering limit that applies elsewhere in Winnipeg, as long as they are following health protocols, such as monitoring and screening those who come in, and tracking who has come and gone.

"Our group of people who are staying in our shelter are effectively a bubble — they get all of their service there. We aren't allowing anyone inside who is not part of that cohort, that bubble," said Thiessen.

Up to 110 people can safely sit in the dining room while physically distancing, Thiessen said. Patrons will wear masks when they aren't eating.

The West Broadway Community Organization will also be serving fewer people for its annual fall dinner, and it will look a lot different than usual.

Instead of a sit-down meal for the community at large, which usually draws in around 300 people, about 40 households are receiving meal kits with food they can cook at home.

They will also be able to take a virtual cooking class online, and a fall dinner will be held over Zoom on Oct. 13.

"The whole idea of this came from our members and our seniors committee, who really wanted to do this because the dinners are just so important for folks who are isolated and don't have the opportunity to get out much," said Nicole Sward, the co-ordinator for the community organization's Good Food Club.

"We just went with it and made it work."

Staff are also reaching out to help patrons who don't have a computer or know how to connect with Zoom get access to a device and log on.

"The feedback has been great. They are so looking forward to it. They will learn how to cook a healthy meal and fight isolation by bringing people together."

Union Gospel Mission is aiming to serve roughly the same number of people as last year by increasing its number of sittings to comply with safety restrictions. It's serving up a Thanksgiving meal on Oct. 10, between 11 a.m. and 1 p.m.

Normally a couple of sittings are held for the meal. This year, staff member Rosanne McLellan says there will be five sittings, with 40 people each. Patrons will line up outside and take part in a brief Thanksgiving service before dining.

The Salvation Army, meanwhile, is handing out free tickets for takeout turkey dinners on Oct. 7, at four different times and four different doors at its Logan Avenue location.

Union Gospel is asking for donations of frozen vegetables, while Siloam needs takeout containers. Both are also appealing for financial donations.

Thiessen admits not advertising this years's dinner could affect donations.

"I think we have some worry that donations will be slumping in general as the pandemic drags on — especially because we aren't having a big media event around the holiday meal either," he said.

"We will have to wait and see where we stand after the weekend."