About 4.9 million U.S. middle and high school students currently use tobacco products, including e-cigarettes. Canadian research suggests a dramatic increase in teen vaping rates here as well. Some Winnipeg students are trying to educate themselves and each other about the dangers of e-cigarettes.

Riley Farrell started vaping when he was just 13 — attracted by the cool vibe, the status, and the youth-oriented marketing.

"On Instagram you see dudes blowing O's and doing all these tricks and having huge clouds and the kids come to school and they want to do that," he says, standing in the hallway of his high school, West Kildonan Collegiate in Winnipeg.

"[The packages] have gummy bears here showing the candy and the fancy writing and the kind of graffiti style ... it's stuff that's meant to be visually striking so when kids look at it, they think 'I want that.'"

But as he learns more about the health risks, he's trying to kick the habit — and he's sharing that message with other teens who vape.

Farrell recently did a presentation for a Grade 10 civic leadership class and members of the Students Working Against Tobacco (SWAT) group at his high school.

Using a PowerPoint presentation, he explained how the different kinds of e-cigarettes work and the differences between nicotine salts and freebase nicotine in e-juice.

Salt nicotine e-liquids allow nicotine to be vaped at higher strengths with a smoother feeling in the throat.

You use different e-cigarettes depending on which type of e-juice you're smoking.

"A little lesser-known fact with the juices, when you burn freebase nicotine at too high of a wattage to where it's burning and not evaporating, that chemical reaction can actually create a type of formaldehyde that you're inhaling and that's really bad for you," Farrell said.

He also described what he understands about the health risks of smoking with e-cigarettes, with the warning that this is still a focus of research.

"When you're inhaling that nicotine into your lungs it's actually making your blood vessels constrict and when they're kind of constricting they're not being able to relax and when you vape daily when you keep them at that constricting rate, it kind of puts you more at risk for higher blood pressure. When you have that constantly going on in your body it can cause heart damage."

According to the American Lung Association, the chemicals found in e-juice, especially the flavoured variety, can also cause so-called "popcorn lung." It's a relatively rare medical condition causing inflammation of the lung tissues, causing breathing difficulties.

"You're getting that shortness of breath and it's messing with your lungs. That's not in every single juice but it is a risk," Farrell tells the class.

Then, there are the effects of nicotine.

"You're chilling in your buddy's basement and you're all vaping and one guy gets head rocked and can't hit anymore because he's about to pass out. That's 'nicking out.' … If I hit it any more, I'm going to puke."

Members of this SWAT group have been doing anti-smoking lectures in middle schools for years — but know they have to update their presentation.

"We recognize that vaping is probably a segment that we need to include. But what are we going to say? What's the message we want to get across to kids?" asks Tammy Harder, the Grade 10 civic leadership teacher and SWAT facilitator.

It's timely, and necessary.

Health experts describe teen vaping as the new "epidemic" in Canada and the U.S.​

New numbers released by the U.S. Centers for Disease Control and Prevention report about 4.9 million middle and high school students currently use tobacco products, including e-cigarettes.

JUUL is now the most commonly sold e-cigarette in the U.S., though it's only been for sale in Canada for just over a year. It's shaped like a USB flash drive and is easy to conceal so they're being used in school bathrooms and classrooms.

JUUL uses replaceable or refillable pods with two strength options, three and five per cent; the U.S. Surgeon General says a full cartridge can contain as much nicotine as 20 cigarettes. They come in flavours like tobacco, fruit, mint, mango, creme and cucumber.

Some Canadian research suggests there's also been an dramatic increase in teenage vaping rates on this side of the border as well.

The federal Tobacco and Vaping Products Act already prohibits sales of vaping products to those under 18, but Health Canada is looking at strengthening the rules, such as limiting the visibility of ads to young people.

Fellow student Sydney Tuck hopes if teens hear this message from their peers, they might just listen.

"Smoking started to kind of decrease with kids which was really good. But vaping is major now," says Tuck, a member of SWAT. "I know if I go into middle school, I'll see kids in Grade 7 with a vape."

Meanwhile, Farrell says parents should also be educating themselves on the hazards and what to watch out for.

"If your kid owns an iPhone and there's a Samsung charger in his room, what's he using that for?" Farrell says.

"If you go into your son's room and it doesn't just smell like cologne or something, it smells like fruity pebbles or like flowers in there, you're going to obviously be like, 'Hey, that's not his cologne.'" 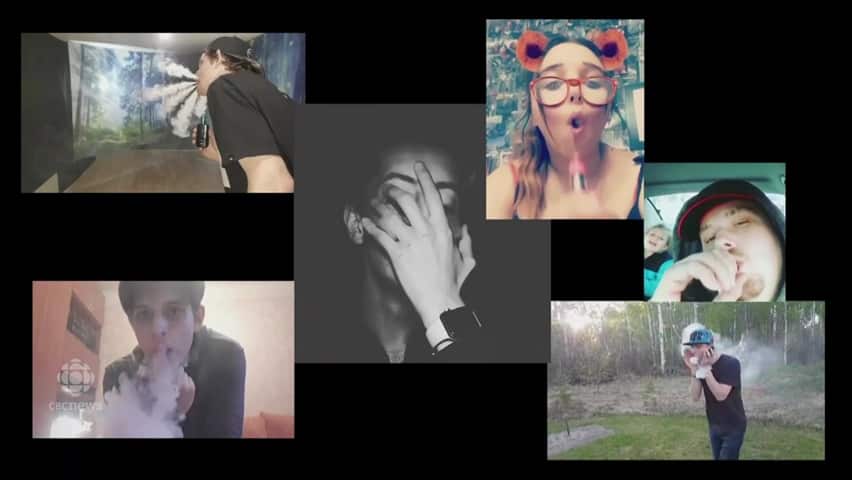 'Nicking out': Winnipeg teens do their part to stem teen vaping 'epidemic'

As well, teens aren't huddled around doorways, smoking outside. They often vape together in cars with the windows up, Farrell says.

E-cigarettes are classified as tobacco products which means vaping is banned in public buildings. Selling it to someone under 18 is prohibited even if it doesn't have nicotine.

That's not stopping older siblings and friends and even parents from supplying minors — contributing to what may be a new generation of nicotine addicts.