Winnipeg city officials have suspended its gopher control program in all its parks after admitting there were "deficiencies" that resulted in gopher poison being left within easy reach of dogs at Little Mountain Park. 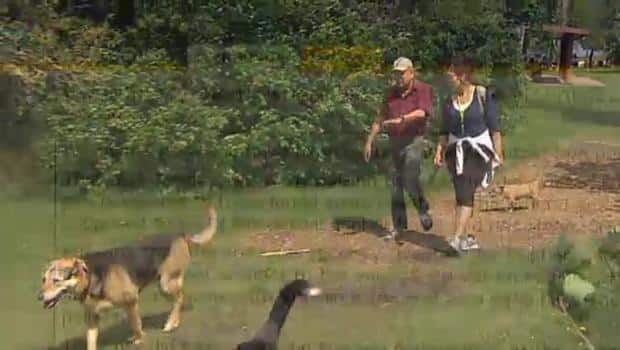 7 years agoVideo
1:53
Winnipeg city officials have suspended its gopher control program in all its parks after admitting there were "deficiencies" that resulted in gopher poison being left within easy reach of dogs at Little Mountain Park. 1:53

Winnipeg city officials have suspended its gopher control program in all its parks after admitting there were "deficiencies" that resulted in gopher poison being left within easy reach of dogs at Little Mountain Park.

Local dog owners have been talking about a warning that's circulating on social media about poisonous pellets at the northwest Winnipeg park.

The warning has spread quickly since it was posted on Reddit on Monday by someone who says their dog ate some pellets that were on the ground in the park's off-leash area.

The dog was treated by an emergency veterinarian who said she had eaten almost a cup's worth of the pellets, according to the website post.

The City of Winnipeg investigated the incident and "determined there were deficiencies," a spokesperson told CBC News in an email late Tuesday afternoon.

The spokesperson said the city has a contract with a professional pest control company to treat parks in areas with reported gopher and Richardson ground squirrel infestations.

Officials are following up with the contractor and reviewing its operating procedures. The spokesperson would not identify the contractor in question.

In the meantime, gopher control operations have been suspended, meaning no more gopher poison will be applied in all city parks for the time being, the spokesperson said.

The pest control company is responsible for notifying the public with signs, and the "control product is placed deep in the gopher hole away from potential human or pet contract" before the hole is packed with fresh soil, according to the city.

A number of gopher holes are visible in the ground at Little Mountain Park, but dog owners who were there on Tuesday morning said they could not find the signs warning them about the gopher poison.

"If they're going to do it, they should do it properly and post some signs everywhere … so that people are aware," said Edwin Yee, who went to the park with his two dogs.

"There's kids that often play in and around that whole area, too, so I'm concerned about both human health and animal health."

Yee said he looked around three different entrances and did not see any signage.

Winnipeg Humane Society CEO Bill McDonald says while he understands the park's gopher problem has to be dealt with for safety reasons, he thinks the city should be more proactive in letting park users know where the poison has been used.