Bike thefts 'one of many crimes' fuelling addiction in Winnipeg. Here's how you can help curb it

Winnipeg police say many stolen bikes end up for sale online, some with slight modifications meant to disguise the bike from its original owner, and some get broken down into pieces and sold for parts.

Do your research, ask questions before buying a bike — and remember 2 locks are better than 1

When Phoebe Chard locked her bike up in Winnipeg's Exchange District last month, she figured it would be safe for a few hours. There was a music festival going on and there were plenty of people out on the streets.

"I locked my bike to a small tree … and when I went to go home later that night, the bike and most of the tree was gone," said Chard.

"Someone had ripped down most of the smaller branches and then had lifted the bike up over the remaining portion of the tree."

The 28-year-old reported the theft to police but didn't know the bike's serial number. So when someone sent her an ad online that matched her bike's description, there wasn't much she could do to prove it was hers.

Her partner messaged the seller to try and buy back the bike, listed for sale for $300, but didn't have any luck reaching them.

"He later got a text saying 'sold fast,'" she said.

Winnipeg police say they have seen a steady increase in the number of bike theft incidents over the last several years. Between 2012 and 2017, the number of incidents went up more than 82 per cent, from 717 to 1,304, according to police.

They note an "incident" may involve more than one stolen bike.

Police say many stolen bikes end up for sale online, some with slight modifications meant to disguise the bike from its original owner, and some get broken down and sold for parts.

"Social media and the internet is a quick and easy avenue for the bike thieves to sell the stolen bikes," said Winnipeg Police Service Patrol Sgt. Todd Martens.

He says as with other property crimes, many thieves are driven by something deeper than just wanting a new bike or a few extra dollars to pay their bills.

"Usually, that [money] is fuelling an addiction of some sort. That money is going into nefarious acts."

Martens said Winnipeg is no different than other major cities when it comes to problems with drug addictions.

"Drugs addiction is a problem, and crime fuels that drug addiction, and theft of bikes is just one of many crimes that fuel that addiction," he said.

"If you don't fuel, as the purchaser, the mechanism of all these stolen bikes, we can slow it down."

Buying a stolen bike doesn't make it yours

Martens says there could be consequences if you buy a stolen bike, whether you're aware it was stolen or not.

Buying a bike you know is stolen is against the law.

It's one of those buyer bewares — there's going to be no compensation to you as the purchaser.- Patrol Sgt. Todd Martens

"If you don't know it's stolen, there's no issues with what you've done," he said, adding that officers, if they become involved, will look to determine if a buyer bought the bike in good faith.

"That being said, you've just bought a stolen bike … and unfortunately it's not yours," said Martens.

"There's an owner who's been victimized and had their bike stolen. That bike is the owner's, so if we get involved, that bike is going to go back to the owner," he said.

"It's one of those buyer bewares — there's going to be no compensation to you as the purchaser."

Signs the bike may be stolen

Martens, an avid cyclist himself, says there are ways buyers can protect themselves when buying a used bike.

He says buyers should always ask the seller for the serial number and check it in the Canadian Police Information Centre, or CPIC, database to see if it was reported stolen.

The site, which is accessible to the public, allows users to search for property, including vehicles and bikes, that has been reported using serial numbers.

Martens says many credible sellers of rebuilt bikes and parts will display CPIC information right in the ad.

"Seeing that in an ad, that someone's run that already, it's a huge confidence builder," he said.

A seller who has multiple bikes for sale at the same time is a red flag.

So is one who refuses to provide a serial number.

"There's no reason that you should be grinding off a serial number. To me there's only one reason, and that's to hide the identity of that bike and catch an unwary buyer."

Martens says other changes to the bike's appearance, like a sloppy paint job, should make the buyer question its origin.

"If they're advertising a very well-known name-brand bike, or any bike, and saying that it was repainted, and you're looking at the ad and it looks like it was done in somebody's driveway and it's a terrible paint job, that should be a red flag," he said.

Hacksaw marks on the frame where a lock might have been placed are also a dead giveaway, as are tires or other parts that don't match.

"It's really imperative that you as a buyer protect yourself," said Martens.

Martens says when it comes to thefts, bike owners need to protect themselves as well, and part of that is preparing for the worst.

He says every bike owner should register their bike's serial number with police, as well as keeping it written down at home and having pictures handy.

"Hold on to your serial numbers. I have cellphone shots of mine, and I also keep pictures of my bikes so that if something ever happened to them, I have a record of what my bike looks like," he said.

He also says while locks are a deterrent, thieves can be very efficient at finding ways around them.

"A lock will deter but a lock, if they really want your bike, will not stop them," said Martens.

Martens says the best place to store a bike is in the house, and bikes that are stored in garages should also be locked as an added protection.

He also says two locks are better than one.

"If I'm putting two locks on my bike, the thief is looking, going 'well, the bike beside me only has one. Why would I go through two locks when I can go through one?'"

Don't be a vigilante

Martens says anyone thinking of trying to recover their stolen bike after seeing it for sale online should reconsider.

"This is someone that has committed a crime.… You're putting your life or your safety in peril."

Martens says if you see your bike for sale online, it should be reported to police.

Chard did call police when she saw her bike for sale, but she says she was told without the serial number police couldn't get involved because she can't prove the bike was hers.

She said she knows she may never get it back, and she'd like to see buyers take more responsibility when buying a used bike.

"I think there should be an onus on people to do some research and try and find out if the thing they are purchasing is something that has been stolen," she said.

She plans to buy a used bike this time around and will be asking lots of questions to make sure it isn't stolen, but she knows not all buyers will do the same.

"If you see a good deal, you don't necessarily want to know … that it's been acquired in an illegal circumstance," she said.

Chard thinks sellers should be required to list a bike's serial number clearly in an ads.

"I don't think people are ever going to stop stealing bikes, but I think that might be one way to attempt to get the numbers down." 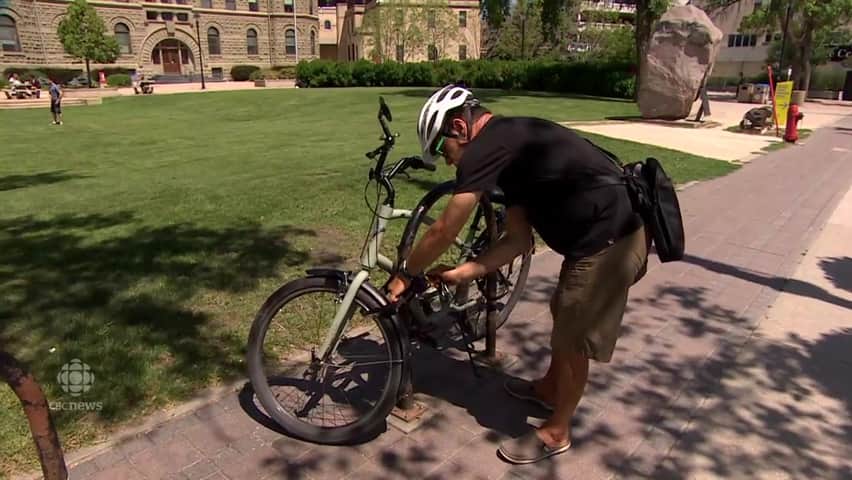 2 years agoVideo
2:12
Last year there were over 1300 reported incidents of bike theft. Police say stolen bikes are fuelling addictions in Winnipeg, but there are steps that owners and buyers can take to curb it. 2:12
CBC's Journalistic Standards and Practices|About CBC News