Teen charged with attempted murder after 12-hour standoff with police

Woman, 23, wounded by shotgun blast prior to Gilbert Park incident

A boy, 15, has been charged with attempted murder and several other young men are facing charges including armed robbery following their arrest after an unrelated 12-hour standoff with police in Gilbert Park on Friday.

Police went to the Chudley Street home around 4:20 a.m. CT after receiving a report that a gun might have been fired in the home while several people — including a child — were inside.

Officers took two males who were outside the home into custody, but others in the home refused to come out, which led to several other units including the tactical support team, crisis negotiators and the K9 unit flooding into the area.

The resulting standoff — which carried on until shortly before 5 p.m. CT— saw police ask neighbours to stay in their homes and nearby Shaughnessy Park School put into lockdown.

At the standoff's peak, police say, there were 25 units, including the armoured vehicle response unit, at the scene.

Police spokesperson Const. Jay Murray said Saturday police don't know why the suspects refused to leave the home, but did note two of the suspects later arrested had outstanding warrants.

"Over the past few years we've seen criminals take very desperate lengths not to get caught — and this could just be a case of that," he told media at a news conference.

"I'm not sure what they were thinking, [but] I think at a point … it's just best to come out and face the music."

Police took several people into custody as they left the building throughout the day, and in all five people are now facing charges.

Three accused are believed to have been involved in an attempted robbery that happened before the standoff began that ended with a woman being shot.

Murray said three males who had been at a party at the Chudley Street home prior to the standoff left around 2 a.m. armed with a shotgun, intending to rob a woman known to them.

He says the three forced their way into an apartment on Flora Avenue and demanded to be let into the woman's suite.

When she refused, police say, one of the suspects shot through the door, hitting the 23-year-old woman in the upper body. The woman was rushed to hospital in unstable condition but has since been upgraded to stable. 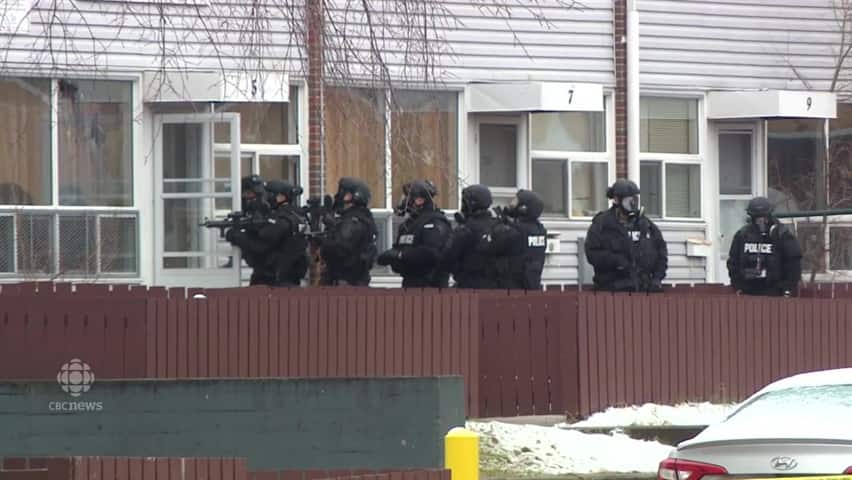 Murray says the three suspects left the scene of the shooting empty handed and returned to the home on Chudley Street where one got into fight with another party-goer and pointed the gun at him.

That led to the call to police that ultimately led to the standoff, Murray says.

"It's kind of two investigations going on at the same time, with officers responding to the injured female and officers are also responding to this address where a firearm had just been pointed at someone," he said.

"At some point those two investigations converged together when it was determined that they were related."

A 15-year-old boy from Winnipeg is charged with attempted murder and several firearm charges, while two other men, 18 and 22, have been charged with aggravated assault and weapons-related charges in connection with the shooting.

Two other teenaged boys, 16 and 13, have been charged with unrelated failure-to-comply offences.