Winnipeg's largest school division released its back-to-class plan along with other divisions on Monday, and the strategy doesn't waver much from the provincial health guidelines released last week.

The use of masks for students from grades 5 to 12 is "strongly encouraged" and "expected" — but not mandated — in the Winnipeg and Seven Oaks school divisions, among others.

"We are not allowed to mandate that anybody wears them except for on school buses," said Radean Carter, a spokesperson with the Winnipeg School Division, the largest in Manitoba.

"It's important to understand that mandating means that somebody's going to go around and write you a ticket … if it becomes like public health law."

Nevertheless, WSD — which represents 78 schools with more than 32,000 students and more than 4,500 staff members — is urging people to mask up.

"I think what we're going to have to see, especially in our schools, is that masks become like a pair of socks — you have to have one per day or two per day for some kids, morning and afternoon." 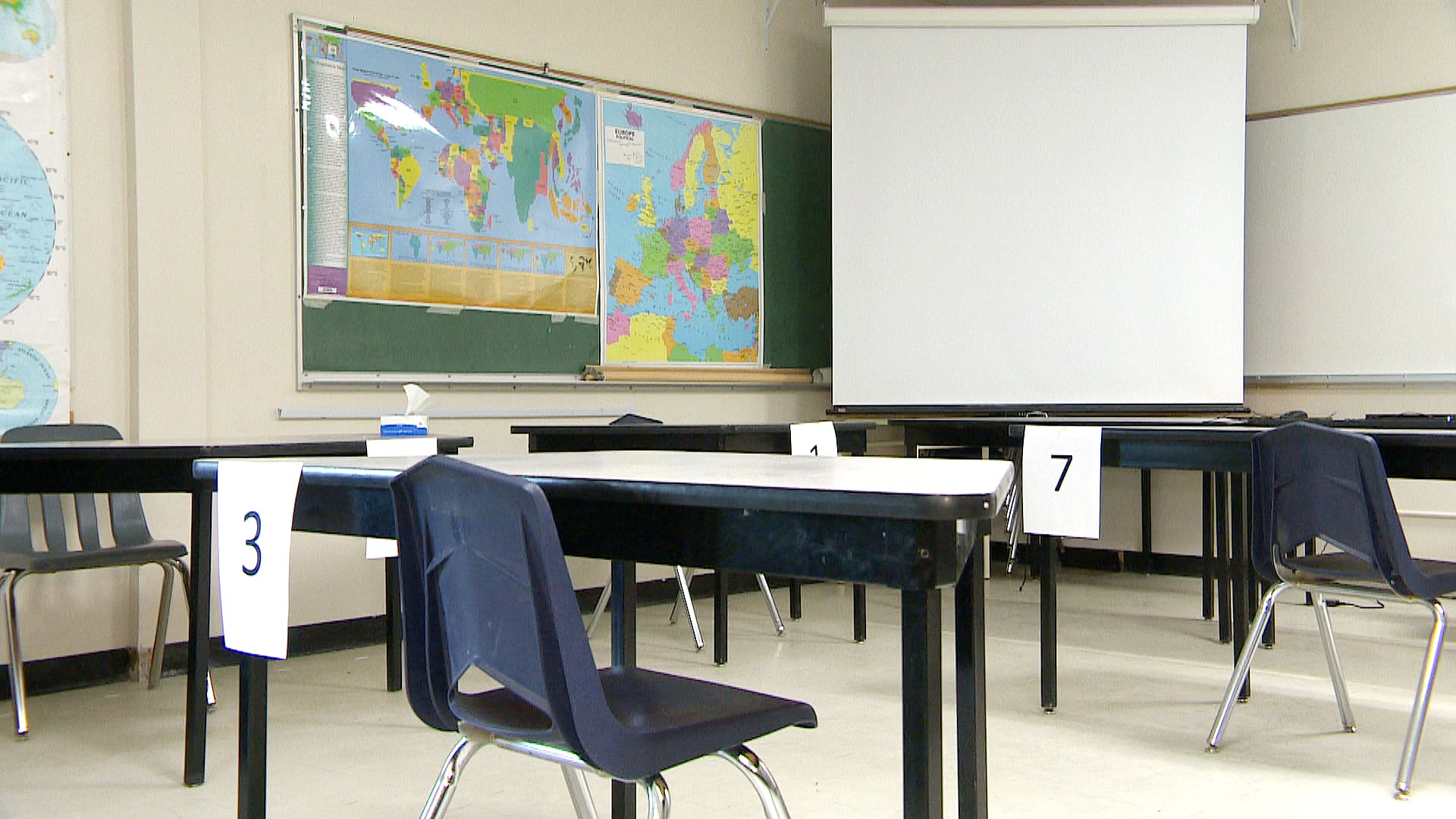 3 months agoVideo
2:12
A series of Manitoba school divisions released their back-to-school plans Monday, each one largely resembling the next, barring a few details. 2:12

She advises parents to get a stockpile of masks to switch them up each day and because kids will likely lose them. In those cases, schools will have some extras on hand.

Carter also stressed that parents need to be more strict about keeping kids with colds at home.

In the past, students would often go to school with runny noses and sneezing bursts. That can't happen anymore, she said.

"We need you to keep your children home if they're sick."

Last week, the province announced its guidelines for going back to school, but left it up to individual divisions to design the details for their students.

In the Winnipeg School Division, students from nursery to Grade 8 will have classes every day, five days per week. Recesses and lunches will be staggered so not all of the kids are out at the same time, Carter said.

Each school will set doors for entering and exiting, in order to limit contact that way as well, she said. Measures are being taken to meet a minimum one-metre distance between students in classrooms and, if possible, two metres.

Cohorts, groups of students that will be together throughout the school day and for the full week, will also be established. They will be in the same classroom, eat their lunches together and take recess together.

At the high school level, alternate-day attendance will be implemented as much as possible, Carter said.

"I can't say across the board for everybody, because each high school's looking at different options. They are all looking at every option available to them."

The division won't require teachers to instruct those in attendance in the classroom while also live streaming to those at home. Instead, those at home will work on something else and get the lesson when they return to the classroom.

"We just don't have the ability or the technology or, really, the desire to do that," said Carter. "It's not really a good way of teaching."

With COVID-19 cases spiking recently in Manitoba, people are understandably anxious about the start of school, but those who choose to keep their children at home will not be supported by the division, Carter said.

They will have to register for home-schooling through the province instead.

If it is an issue of the student or someone in the family being immunocompromised, that's a different story. The division and school will work with them to come to some kind of accommodation, Carter said.

If a COVID-19 case shows up in a school, every parent will be notified, she said. The individual who tested positive will not be identified but students from the same cohort as the COVID-19 patient will be advised if they need to self-isolate, self-monitor, or get tested.

Since Saturday, Manitoba has added 94 new COVID-19 cases and one more death.

As of Monday afternoon, the province has had a total of 731 cases since the first ones were detected in mid-March. Of those, 490 have recovered.

There are 232 active cases, including 11 people in hospital — three of them in intensive care.

There have been nine deaths related to COVID-19 in Manitoba.

Seven Oaks School Division, which has nearly 11,000 students and 1,000 staff in 24 schools in northwest Winnipeg, released its return-to-school plan on Monday. It mostly mirrors what the WSD intends to do.

Students from kindergarten through Grade 8 will be in class full days, while most high school students will attend in person every second day and learn at home on the alternate days.

Recesses and lunches will be staggered and playground structures will be open for students to use, with equipment being cleaned between each recess period.

Large gatherings like assemblies and concerts will not happen while gym classes will continue with modifications for physical distancing. When possible, those classes will take place outside.

As for music, choir and sports teams, the plan is for those to happen but with strict guidelines.

Like with the WSD, if a student tests positive for COVID-19, public health will provide direction to those who were in close contact. But there is no clear answer on whether those in a cohort with that student would be forced to be away from school for 14 days.