Public health officials extended the province's code red restrictions last week, with exemptions given to thrift stores for them to reopen and sell non-essential items. The province said the stores' closures have disproportionately affected low-income people.

Winnipeg's thrift shops are operating again and their reopening has been met with enthusiasm.

Public health officials extended the province's code red restrictions last week, with exemptions given to thrift stores for them to reopen and sell non-essential items. The province said the stores' closures have disproportionately affected low-income people.

The Kildonan Mennonite Central Committee's thrift shop on Chalmers Avenue reopened on Saturday, with lineups of people stretching around the block.

"The response has been overwhelming, which we anticipated," said Robin Searle, the chief operating officer of the Kildonan MCC Thrift Shop.

Searle said since Monday, the influx of customers have been steadier, but lineups are still forming sporadically outside the storefront.

Winnipeg's Thrive Thrift Shop at 555 Spence St. has also been busy since reopening. During the first hour it opened on Monday, around 20 people paid the small shop a visit.

"People come just to visit ... they love the store and so a lot of them come and say hi," said Kristy Muckosky, the store's manager.

Helping those who are low-income

The MCC thrift store is now operating at 25 per cent capacity with 70 people permitted in the store at a time. Searle said since they've reopened, they've seen an increase of new customers.

"There's people who have been laid off because of COVID and we are seeing new people coming into the shop because they are purchasing items that they actually need: clothing, bedding, books, those sorts of items," she said.

"So I believe that it's making a huge difference for the community to allow those individuals on limited income to come and shop," said Searle.

Maggie Kus was shopping for toys and Christmas decorations in the store. She said she was able to buy a lot "for just $50."

"It makes us happy ... like people who are low-income living. Always makes you happy that you bought something beautiful, nice," said Kus.

Muckosky said most customers picked up clothes on Monday morning, which were marked as no more than $6.00 in the shop.

"A lot of people don't have a lot of money so I think this is very important," said Bobby Wesa, who was shopping at the Thrive Thrift Store and looking for craft items.

Not primed to shop online or do pick-up

Muckosky said because the store is located next to Thrive Community Support Circle, a resource centre, it also gets a lot of traffic.

She said most of their customers, who are low-income, don't have a car or a credit card, so they're not able to do curbside pick-up or order things online.

"A lot of them have mobility issues, suffering from mental health. They're not able to go from the West End to St. Vital to Kenaston to do all their holiday shopping, so being local, being central in the West End is really important." she said.

Searle agrees that accepting cash and allowing people to shop in-person has been a drawing factor.

"If they don't have a credit card or a means of e-transferring for them, it was a challenge to try to get items that they needed," she said. 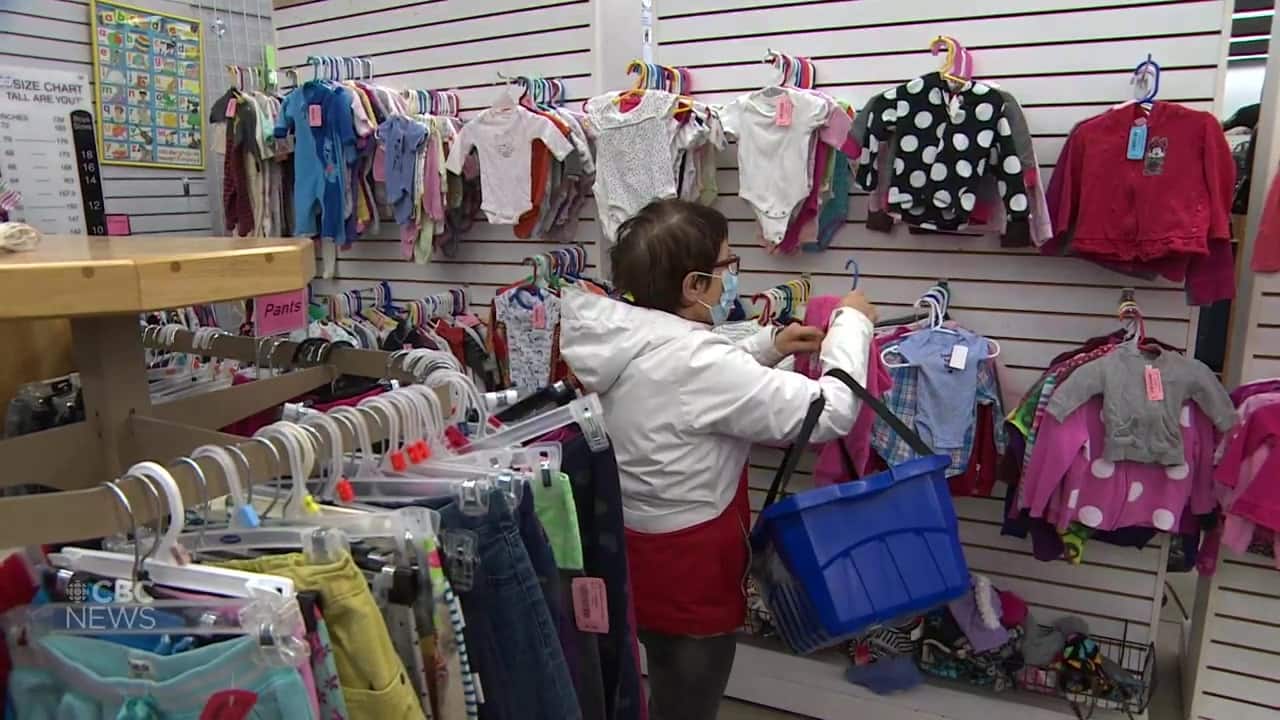