A group of Winnipeggers took time Wednesday to organize a ceremony to honour their neighbour, Bill Neil — a 99-year-old Second World War veteran who otherwise wouldn't have had a Remembrance Day service this year, due to COVID-19 restrictions.

A group of Winnipeggers came together Wednesday to organize a ceremony to honour a neighbour — a 99-year-old veteran who otherwise wouldn't have had a Remembrance Day service this year, due to COVID-19 restrictions.

Bill Neil, who served overseas during the Second World War as a wireless operator, usually attends one of the various Remembrance Day services around town on Nov. 11. But current COVID-19 restrictions — which prohibit social gatherings larger than five — barred him from doing so this year.

"The kids and I were talking at the dinner table that this would be the first Remembrance Day that Bill didn't have a service to go to," said Robert Schulz Sr., an educational assistant at Luxton School who lives a few doors down from Neil in Winnipeg's Inkster Gardens area.

"We knew that was important to him, so the kids decided we were going to bring the service to him."

For years, Schulz and his two children — Chanel, 12, and Robert Jr., 15 — would deliver letters they and other Luxton students had written for Neil.

"He's invited us into the living room in the past, and kind of touched our hearts," Schulz said.

One time, Neil told Schulz and his children about how he lost his arm.

He served overseas during the Second World War as a wireless operator with the 8th Reconnaissance Regiment of the 2nd Canadian Infantry Division.

In August 1944, while serving in the Normandy region of France, Neil was travelling in an armoured car that was hit by an artillery shell. The blast resulted in the loss of his left arm above his elbow, according to his War Amps biography.

"That was a striking story, and made war really real for my children and I," said Schulz, whose parents were first-generation war immigrants to Canada.

So on Wednesday, around 11 a.m., Schulz and some neighbours put up a Remembrance Day-themed display on Neil's front lawn, including an old car with a sign that had poppies arranged to read, "Merci."

Schulz was also able to retain the services of Joseph Smith, a retired decorated corporal, who plays the bagpipes. Smith kicked off the physically distanced ceremony by walking on to the lawn, planting himself in front of Neil's living room window, and playing the Scottish folk tune Flowers of the Forest.

Smith has been the piper for the Remembrance Day service at Royal Canadian Legion No. 2 in Weston for the last couple of years. This year, he was also slated to perform at the service at Luxton School but that was cancelled, he said.

Schulz was organizing that service, and approached Smith about playing for Neil instead.

"An opportunity like that, for myself, it's just one that I can't refuse," said Smith, adding that this might be the first time he played for one person. "Ninety-nine years old. World War II vet. We don't have many of those left.

'Grateful that the people still want to remember him'

Neil, joined by three of his children, came outside to deliver a speech to the couple of dozen people in attendance, who maintained physical distancing.

Wednesday morning's service was "overwhelming" and greatly appreciated, Neil's children said. Daughter Nancy Devisser told CBC News that her father has attended Remembrance Day ceremonies since healing from losing his arm, along with shrapnel wounds in his chest and an injury to his right thumb.

Neil wouldn't talk often about his experience during the Second World War in order to shield his children, said Susan Goleski, another daughter. But Neil always imparted the significance of Remembrance Day and paying respect to those who put their lives on the line.

His youngest son, William Neil Jr. hopes people recognize that Nov. 11 is not just a holiday, but is a day to reflect and give thanks to those who fought to provide the lives they currently get to live.

The elder Neil was "pleased and overwhelmed" by the crowd outside his home on Wednesday morning, said Devisser.

"[He's] just grateful that the people still want to remember him as a veteran."

Neil's children were thankful for the neighbours who came together for their father.

"It was brought to him. He didn't have to go out and attend one," Goleski said, adding that even without COVID-19, he would have physically struggled to attend a ceremony.

"This [Remembrance Day] was the most special," said Devisser. 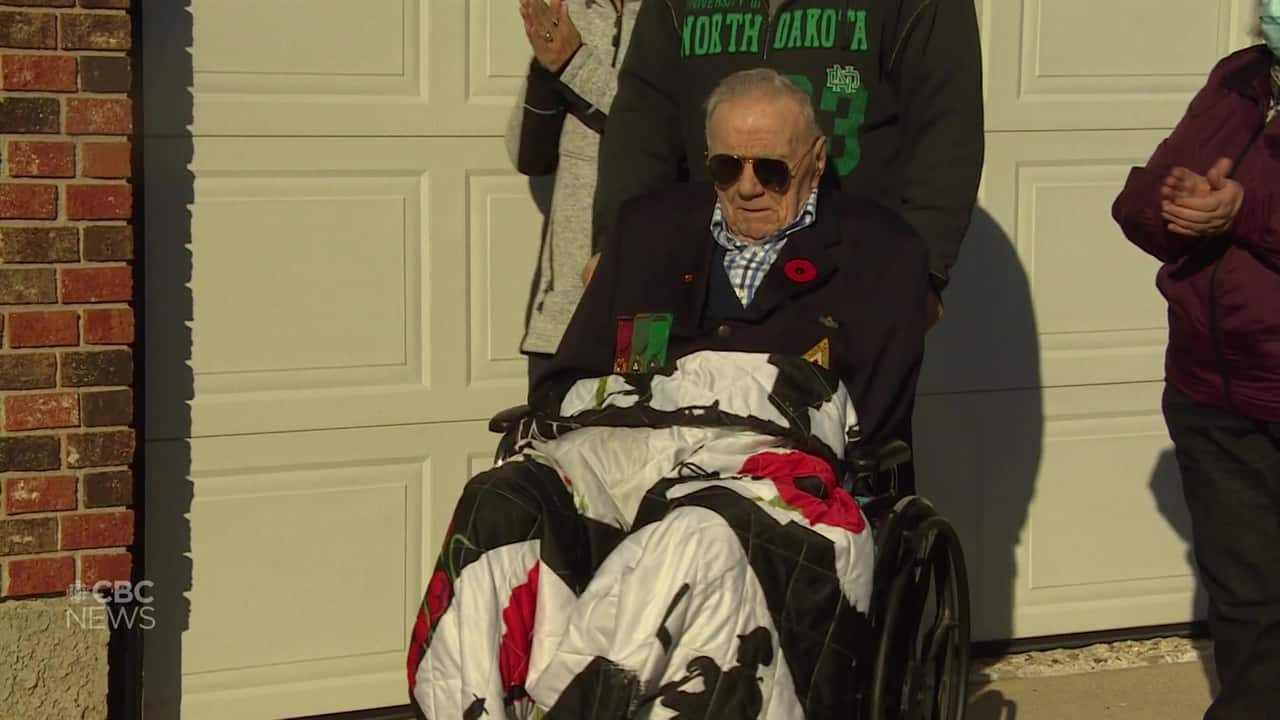 3 months agoVideo
2:11
A group of Winnipeggers came together Wednesday to organize a ceremony to honour a neighbour — a 99-year-old veteran who otherwise wouldn't have had a Remembrance Day service this year, due to COVID-19 restrictions. 2:11

With files from Marina von Stackelberg