Use of force videos 'damaging to the police brand,' expert says after video shows teen's shooting

A disturbing video showing a police officer shooting at a 16 year old suspect could damage police image even if it's ruled later that the use of force was necessary, that's according to a sociology researcher at Brandon University.

A video showing a Winnipeg police officer shooting at a 16-year-old could damage the police service's image — even if it's determined that the use of force was necessary, says a sociology researcher at Brandon University.

"It's always horrific when police respond with force. I don't think it's easy to see," said Christopher Schneider, an associate professor of sociology who is studying how social media is changing the way police respond to their work.

The 16-year-old was taken to hospital in critical condition after he was shot by police outside a Winnipeg convenience store Thursday night, when police responded to a report of an armed robbery.

In videos obtained by CBC News, the teen is seen banging something against the glass doors inside the store.

As police surround the front entrance of the 7-Eleven convenience store, the teen walks out holding what appears to be a weapon above his head. Witnesses have told CBC it was a machete. 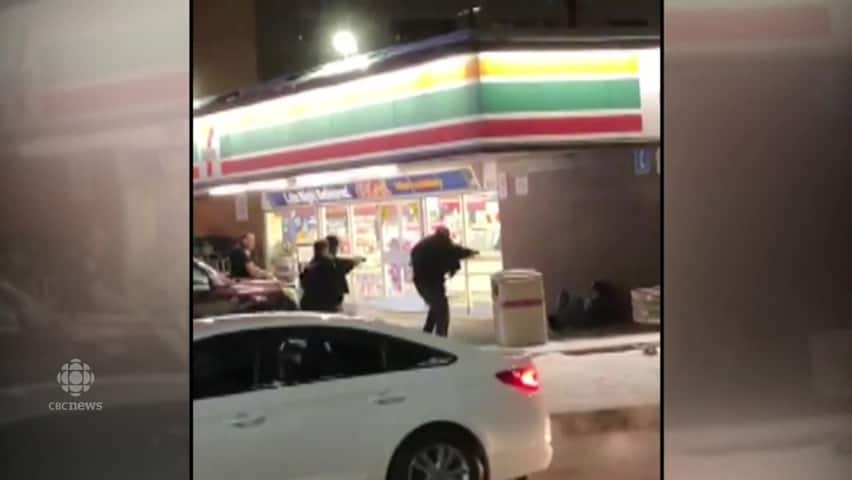 The teen continues walking toward a police officer, who is seen standing with his service pistol drawn and pointed.

Moments later, nine shots are heard in the video and the teen drops to the pavement.

The video has drawn a range of reactions online, including questions around why nine shots were fired by the officer.

"There are people who are saying this guy deserved it, good, he didn't listen to police commands," said Schneider.

"But on the other side we're seeing people saying things like 'was this necessary?'"

He says police will always be judged in such scenarios, regardless of the circumstances — many of which are still unknown.

"Was this person suffering from mental illness?" said Schneider. "Was there some sort of delusion going on? We don't know."

Schneider, who is the author of a book titled Policing and Social Media: Social Control in an Era of New Media, said the fact the video of the shooting was posted minutes after the incident, and before police could publicly respond, is something that's becoming more common.

"Police lose control of being able to say what they want, in terms of how they construct the narrative. So police are just a diversion of the narrative, rather than the narrative."

The shooting is now being investigated by Manitoba's police watchdog, the Independent Investigative Unit.

But Schneider said no matter the outcome, the damage may have already been done.

"There are people that are seeing that [video] who, of course, are judging the circumstances of the police use of force outside of the context in which the officer did it," Schneider said.

"All of that is damaging to the police brand, even if the findings later turn out that the use of force was warranted."

Use of force expert

"Depending on a person's agenda you can look at this video in different ways," said Steven Summerville, a retired Toronto police officer and an expert on use of force.

Summerville wouldn't say whether he thought the officer acted appropriately by shooting at the teen nine times. He said that is for the Independent Investigation Unit to decide, and acknowledged he doesn't know the thought process of the officer involved in the shooting.

But, he said, "police officers are taught to shoot when their life or lives of others are at risk, and you are, generally speaking, taught to shoot until the threat is, you know, removed."

He added that suspects who are shot don't necessarily fall to the ground right away.

"I believe there is a misunderstanding of reality … maybe it's because of movies or TV shows, I don't know — that a person shot [is] instantly incapacitated," he said.

"That's not the case. This youth was still moving after receiving five or six rounds."

He said the officer in this case would have had to act fast, because he is accountable for his own safety and the safety of others around him.

"He has to stop that threat from advancing," he said. "Officers are also taught the option to disengage — like, remove himself from there. But if he were to do that, is he leaving the community around him at risk?"

Nelly Gonzalez is an award winning reporter/editor at CBC Manitoba based in Winnipeg. She's been working with CBC since 2011 and has 14 years reporting experience in Winnipeg. She began working at CBC as a videographer covering stories in Brandon before relocating to Winnipeg in 2012.

With files from Darren Bernhardt