The Winnipeg Police Service tried something different to improve community relations and tackle issues of prejudice and racism. On Friday they hosted a one-day workshop and invited 150 officers and 150 people from a variety of community groups and organizations.

The Winnipeg Police Service took a new tactic Friday in an effort to improve community relations and address issues of prejudice and racism in this city.

They invited 150 officers and 150 people from a variety of community groups and organizations to attend a one-day workshop to talk through the tough issues, with the help of Emmy award-winning Canadian filmmaker Paul Saltzman, who screened two of his documentaries on the topic to get people talking.

"Prejudice, racism, those types of words are thrown around a lot, and diversity but truly talking about those issues, and confronting those issues and talking about how people feel, and what they're going to do about those feelings, isn't a normal conversation," said Winnipeg police deputy chief Gord Perrier.

In the movie The Last White Knight, filmmaker Saltzman goes back to Mississippi to interview a member of the KKK who knocked him out in the 1960s. The film explores whether reconciliation is possible. What followed were some uncomfortable conversations about prejudice in Winnipeg.

"It's about listening, it's about interacting, it's about sharing, probably not about solving everything but people I think will feel emotional today, they'll feel uncomfortable at times and frankly that's really a good thing and that's what we are hoping," said Perrier.

The workshop was held at the Springs Youth Activity Centre, next to Springs Church. That in itself bothered some attendees who were quick to voice concerns about the distance from the city centre and affiliation with a religious group.

"What I really enjoyed seeing is how immediately the community got into the issue,"said Kate Kehler. "Knowing the power imbalance that is inherent with the police relationship to the community and with the marginalized community I wasn't exactly sure to expect."

Kehler works for the Social Planning Council of Winnipeg and deals with some of the city's most marginalized citizens. And while she commended police for taking the first step to mend relationships, she said there is lots more to do.

"Its not good enough to just address the situation or talk about we actually need some actions and that's what we heard in the room," said Kehler.

"As a typical white girl, even though I'm trans[gender] my interactions with the police are okay, I haven't had any problems with them but I know people, of colour or Indigenous, and doesn't go so well for them and that's something that needs to be addressed," said Shandi Strong.

Police had reached out to a number of different organizations and allowed them to chose who to send to the event.
Perrier said officers wanted to give each group control over who participated in the dialogue.

While 16 all-Indigenous organizations were invited, only nine sent participants. The rest didn't respond. Kehler says that in itself speaks to the depth of the issues between police and the Indigenous community.

"While I don't doubt that the Winnipeg police did everything they could to get people from the marginalized communities out here, I'm sure they did, now we have to take it back and look at why they didn't come," she said.

Sylvia Boudreau, an Indigenous woman, works for the City of Winnipeg's Community Services Department and volunteers with the WPS. Her interactions with officers have been positive but said that isn't the case for all Indigenous people.

"There is a lot of division in the city of Winnipeg, even with the different diversity in the city there's still that division and I think that's something that all residents of the city need to start listening to and paying attention to," said Boudreau.

She said racism isn't new here but the recent court acquittals of Gerald Stanley and Raymond Cormier have brought it to a boiling point.

"I think with the added access to social media it's made it more easier for people to come out of the woodworks and as a resident of this city it's actually very disheartening," said Boudreau.

Filmmaker Satlzman said it's important to remember that no one is prejudice-free.

But, he added, it's even more important for police and front-line responders — who have to make quick decisions in very tough situations — to question those assumptions.
"You're trained to react fast, even more important that you know your own prejudices because when I'm responding fast ... we don't want to be responding from prejudice we want to be responding from heart and soul and intelligence and what's real," said Saltzman.

"We all have prejudice, there isn't a human being on the planet who doesn't have a thought now and then. It can be everything from 'boy is he fat,' 'oh look at the rubby on the street,' 'she's a woman she's not as strong.' You know. A million different things, where for reasons about our own insecurity, we make another lesser," said Saltzman.

Saltzman encouraged the participants to take a look at themselves and become aware of their own prejudices. 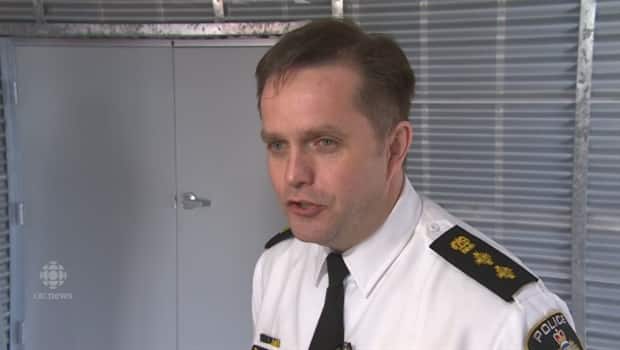 3 years agoVideo
2:35
Emmy award-winning Canadian filmmaker Paul Saltzman moderated the event — and even shared a few of his movies about racism to get the crowd talking. 2:35