The Winnipeg Police Service (WPS) is facing a multi-million dollar shortfall in 2016, the police board says, unless the city steps in to bail the service out. 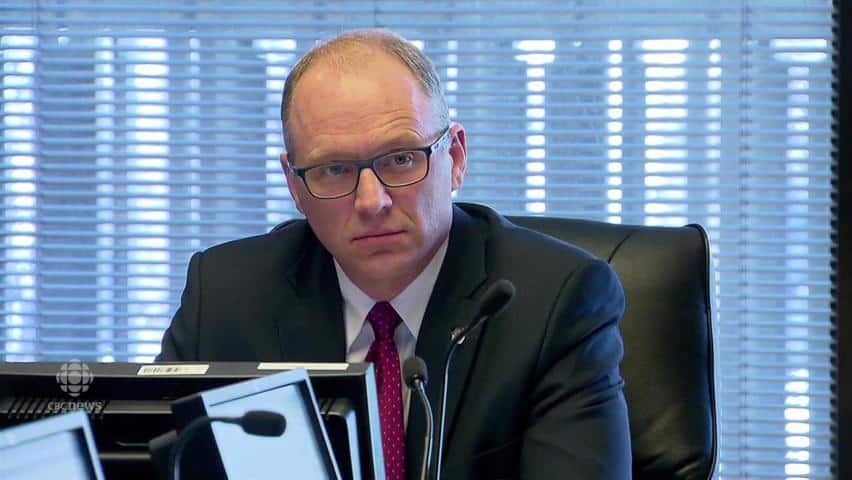 5 years agoVideo
2:26
The Winnipeg Police Service (WPS) is facing a multi-million dollar shortfall in 2016, the police board says, unless the city steps in to bail the service out. 2:26

The Winnipeg Police Service is facing a multimillion-dollar shortfall in 2016 unless the city steps in to bail the force out, the police board says.

The Winnipeg Police Service's 2016 budget includes plans to lay off 40 of 68 cadets, cancel the 2016 recruitment class and lay off 20 of 37 members enrolled in the class, the police board revealed at its meeting Friday.

Police board executive director Don Norquay provided budget figures showing the service was short by just under $2.5 million in the budget this year.

Declining revenue from photo radar enforcement, increased costs of salaries and benefits and some other expenses contributed to the shortfall, he said.

The police had an even bigger shortfall but reduced the gap by eliminating a sick leave severance account, saving $1.05 million. It comes as city councillors go through the preliminary budget. They will vote on it by the end of March.

The board heard that although crime in general has dropped in Winnipeg, there are some statistics that remain high.

Violent crime rates in Winnipeg, "are still a major challenge compared to the rest of the country," Norquay said. Statistics show violent crime is 65 per cent higher here than the national average — the third worst municipality in Canada in that category.

Norquay told the board proactive police time will be reduced and service will become more "reactive," adding the current allocation from the city "would not be sufficient to maintain an adequate police service."

A step back for WPS

Outgoing police chief Devon Clunis said the cut would constitute a step back for the WPS.

"What you would notice is us going back to being a reactionary police service. You would still be able to get a police officer if you have an emergency, but everything I've been driving at for the past 3½ years is about the proactive, prevention piece of policing which ultimately is the long term cure," Clunis said.

"That's what would be missing. We would go backwards, not forwards."

Scott Gillingham, chair of the police board, didn't support the board's motion for more funding.

Gillingham told reporters he has consistently said the cost of policing cannot continue to rise as much as it has been.

He noted the WPS received a 6.3 per cent increase in this year's preliminary budget, even though that's not enough to cover their shortfall.

That sentiment was echoed by Mayor Brian Bowman, who said in fact, the budget for the WPS has increased 80 per cent over the last decade, a rate which the city can no longer shoulder.

"The continuing increases to the police budget at the rates they were being incurred is not sustainable," Bowman told reporters.

Bowman also believes the service could find money in its budget to avoid layoffs.

"A budget that is increasing by b$16.7 million — a 6.32 per cent increase compared to last year — provides more than enough resources to meet their labour needs. You just do the math, it's really not that complicated," Bowman said.

Pay increases for officers set out in the collective bargaining agreement make up 85 per cent of the police service costs. Clunis said the proposed budget would mean cuts to benefits and salaries and a reduction in police, cadets and recruits.

Gillingham said he respectfully disagrees with comments made by Clunis and the head of the Winnipeg Police Association, Moe Sabourin.

Role of board chair should be reviewed: Clunis

Both Sabourin and Clunis say it is inappropriate for Gillingham to be both head of the police board and a member of the city's finance committee. They say there is a conflict of interest in being in both roles.

"This setup does not work for the citizens of Winnipeg," Clunis said, adding Gillingham's role should be reviewed. "I think it's a little difficult when you have the very chair of the board not going with the rest of the board."

Gillingham pushed back, saying there is no overlap in his role as a member of the finance committee and police board.

That position was supported by Bowman, who called Gillingham an honourable man in a position that was created by the provincial government.

"The police board does not have the power to make a final budget decision. The police board makes recommendations. If there was any, which I don't believe there is, ever a time that there may be an appearance of conflict, it would be at council, when council makes a decision on budget."

While he came out against the motion to have the city cover budget shortfall costs, Gillingham said he is willing to work with the police service, city council and the police board to find the money in the budget to avoid the layoffs.

"Whatever the final number is, the final budget that council decides upon, from that number, the service and the board will work together to allocate the budget," he said.

"I am very committed to doing the hard, hard work of allocating a budget that is set at $280 million and I'm committed to working hard enough to ensure that any impact to complement (police services) will be mitigated."