Devon Clunis, who was sworn in as Winnipeg's chief of police on Nov. 2, 2012, announced his retirement on Thursday.

Devon Clunis was sworn in as Winnipeg's chief of police on Nov. 2, 2012 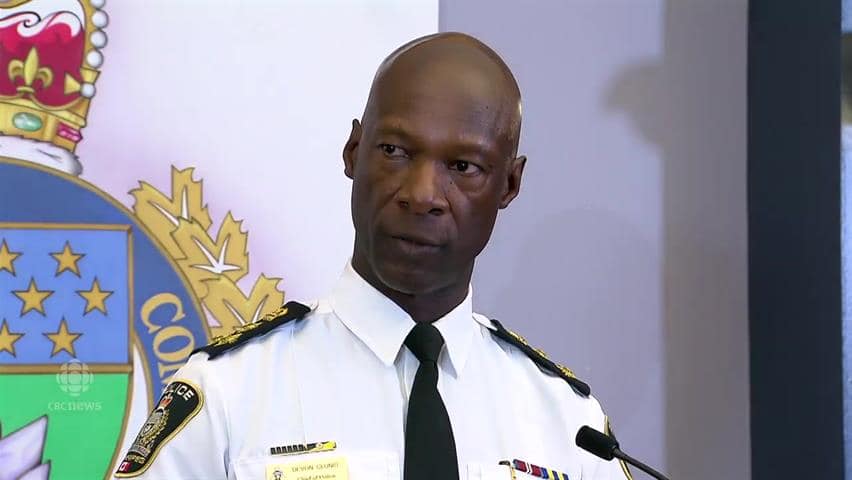 Winnipeg's police chief is stepping down.

"Some of you might find it difficult to believe, but I'm extremely happy to be announcing my retirement," Devon Clunis said Thursday at a news conference attended by Mayor Brian Bowman and police board chair Scott Gillingham.

Clunis, who is 52, has worked with the force for 29 years and was sworn in as police chief on Nov. 2, 2012. He said his goal as chief was to foster a "culture of safety" for all citizens, by "raising the social consciousness" of the community.

"Only by addressing the social roots of crime will we be effective," said Clunis on Thursday.

"I truly want to thank the men and women of the Winnipeg Police Service [and] the citizens of Winnipeg for having helped me to accomplish my purpose, my goals," he said.

Clunis said potential cuts to the Winnipeg Police Service have "absolutely" nothing to do with his decision to retire.

"I've been contemplating this whole issue of retirement for quite some time now," he said, adding he wants to spend more time with his wife. 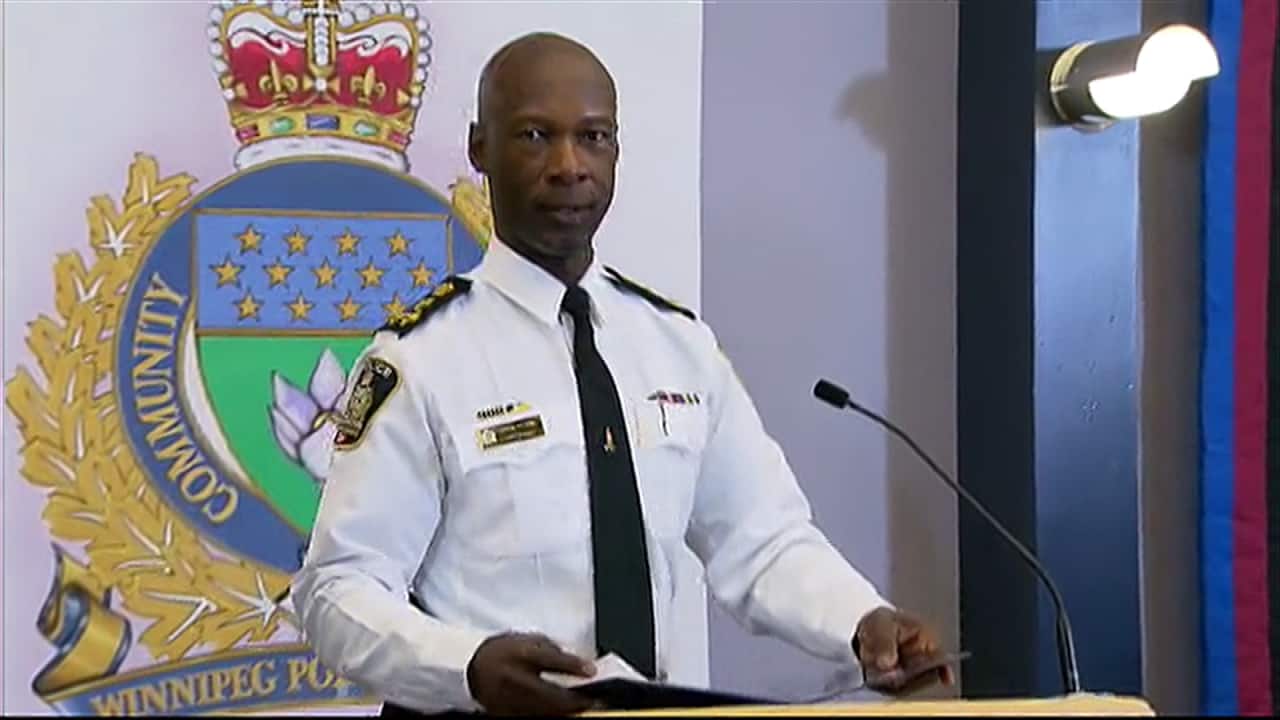 RAW: Winnipeg police Chief Devon Clunis, "I am extremely happy to be announcing my retirement." "It's simply time for me."

5 years agoVideo
3:11
Winnipeg's police chief is stepping down. Devon Clunis, who was sworn in on Nov. 2, 2012, announced his retirement Thursday. 3:11

Mynarski councillor and police board member Ross Eadie said 80 officers and cadets have to be laid off.

"There are enough officers being laid off that there won't be a cadet program," Eadie said.

The Mynarski councillor said he will introduce a motion later this month calling for a raise in property taxes to make up the difference in the budget and prevent the layoffs. 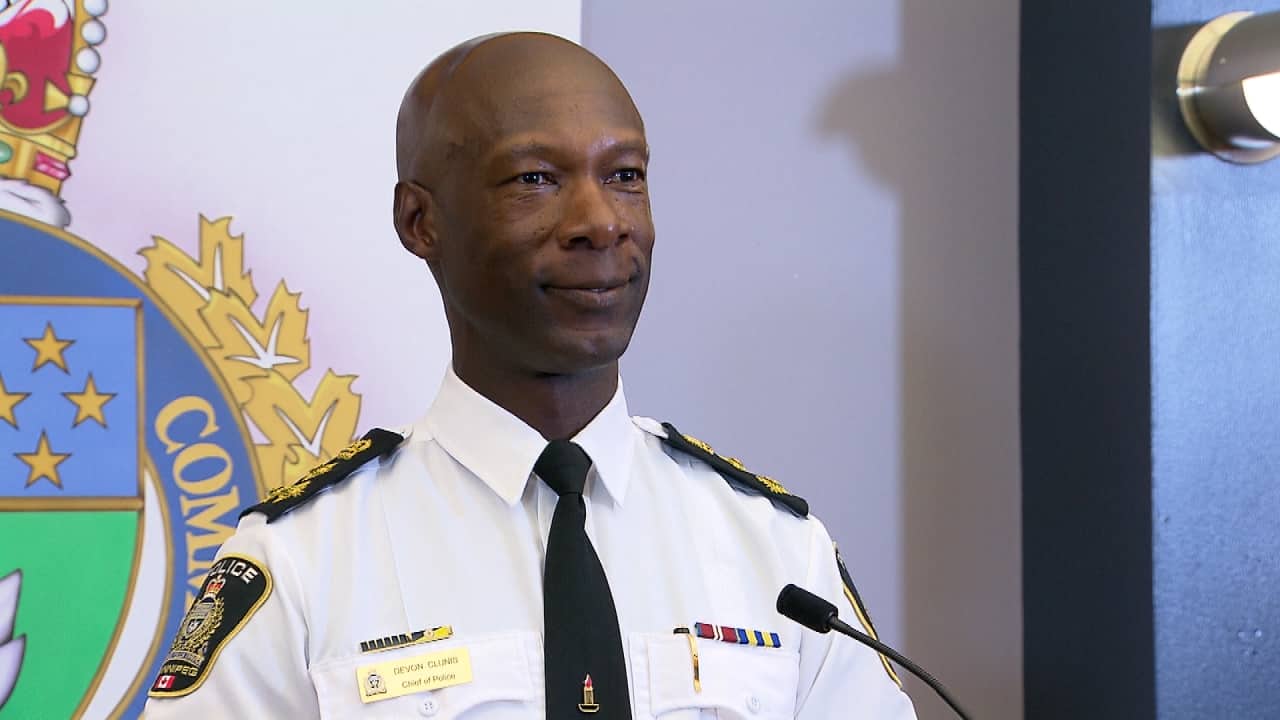 5 years agoVideo
4:53
Winnipeg's police chief is stepping down. Devon Clunis, who was sworn in on Nov. 2, 2012, announced his retirement Thursday. 4:53

Clunis came to Winnipeg with his family from Jamaica 40 years ago and grew up in the North End.

During his 29-year career with the Winnipeg Police Service, he served in all major areas of the organization, including uniform patrol, traffic, plainclothes investigation, community relations, organizational development and duty office, as well as in a number of administrative leadership roles.

Mayor Brian Bowman said he was surprised to learn Clunis had decided to retire but after speaking with the chief, he understands and respects the decision.

"I think it's a shame," said Mackelberg.

Police officers respected Clunis because he rose up through the ranks and knows Winnipeg so well, he said.

"He understands the unique dynamics of the city and culture that we have here. He was proud to be a member of this community and the police service," said Mackelberg.

Clunis had a 'massive influence'

"He's had a massive positive influence in our community and on the whole city."

Clunis was a different kind of chief for Winnipeg, he said. He made great efforts to work with struggling neighbourhoods like Point Douglas, Burrows said.

"He trusted the community, wanted people to work with him," he said.

Clunis believed in "smart policing," Burrows said, which he described as getting to know struggling communities on a personal level and taking strategic steps to prevent crime. For example, under Clunis's leadership police partnered with landlords to identify drug dealers and evict them, Burrows said.

"As a result Point Douglas is a safer place, Winnipeg is a better place," he said.

As a senior officer, Clunis was willing to admit there were problems in the police force and promoted officers who excelled in working with community members, Burrows said.

"That set a whole new tone through the Winnipeg police."

Chief Devon Clunis has announced his retirement. He will address the media today at 2 p.m. (Congratulations Chief!) <a href="https://t.co/FM2dKBe8lm">pic.twitter.com/FM2dKBe8lm</a>

With files from Sean Kavanagh, Susan Magas, and Darren Bernhardt