The day before Winnipeg’s city council will vote on a budget that has substantially less than what Winnipeg Police Service was hoping for, the service’s own chief has agreed the requested increases are unsustainable. 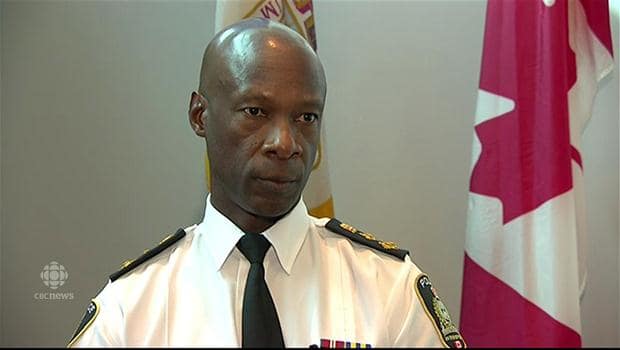 5 years agoVideo
1:49
The Winnipeg Police Services` share of the overall municipal budget has increased by nearly 60 per cent over the past decade and a half, a period during which crime rates in the city have been in sharp decline. 1:49

The day before Winnipeg's city council will vote on a budget that has substantially less than what Winnipeg Police Service was hoping for, the service's own chief has agreed the requested increases are unsustainable.

"It's not sustainable. I don't think any of us want to see that be sustained," said Winnipeg police Chief Devon Clunis during a press conference on Monday. "My mindset was always to see us get to the point where we can reduce the number of police officers within our city because the demand has been reduced."

The city's preliminary budget, which goes for approval tomorrow, has a 6.3 per cent increase for policing costs in it, less than what police were asking for.

The Winnipeg Police Service's own budget now includes plans to lay off up to 70 cadets and some people enrolled in its recruitment class.

Coun. Scott Gillingham said Monday he will introduce a motion on Tuesday to axe a planned body camera pilot program to reduce the need for the layoffs.

A CBC analysis released Monday found the City of Winnipeg is increasingly spending more of its budget on policing services.

In 2000, the Winnipeg Police Service was given 16.9 percent of the city's total budget. In 2016, that was up to almost 27 per cent, much higher than in many other Canadian municipalities such as Regina, Calgary and Edmonton.

Clunis said Winnipeggers should look at what's driving the cost, pointing to  salaries, benefits and facilities costs – the majority of officers make more than $100,000 a year including benefits, and Clunis said the force is in a "negotiating year."

"These are all things which are outside the control of the members of the police service at this point," he said. "Just to maintain the same level of service that we had last year, in order to go forward, the only increases that were asked for was in terms of collective bargaining and the facilities cost of moving to the news headquarters."

He also said Winnipeg is unique among other Canadian cities.

Officers respond to non-criminal matters like intoxicated individuals, missing persons and other issues.

"Almost 80 per cent of what we're doing typically doing today is not traditional police work," he said. "It goes back to what I've been talking about from day one, in terms of the socio-economic drivers of policing in our city, so it's really difficult just to compare Winnipeg to any other city across the nation."

Still, he agreed the increases over the past 16 years are not sustainable.

"What we have to do is what we're doing currently in terms of the partnerships and addressing the root causes of crime and the collective impact approach. We have just started down that road," he said. "That's always been our desire. Our goal is to see the need for policing in the city decline."

Clunis, who recently announced his intentions to retire, also said options for generating revenue shouldn't be up to police officers.

"I don't even like to use the term revenue generation and police service in the same sentence because it almost seems like it sets us up for an inherent conflict," he said. "In terms of photo radar, traffic enforcement, all of those pieces, I don't like see us be driven by any type of revenue generating. This needs to be about safety in the community."

"This is an opportunity for all of us to come together to rectify a situation that's facing the entire city. This is not just a police service issue. This is something for the entire community," he said.

City council will vote Tuesday on their 2016 budget.