Sharing Facebook post critical of use of force in arrest 'did harm to a private citizen': Winnipeg police

The Winnipeg Police Service is apologizing for subjecting a woman to online harassment when it shared her Facebook post criticizing police actions during a controversial arrest caught on video.

Service apologizes, but expert says police response to criticism for post was 'basically blaming the victim'

The Winnipeg Police Service is apologizing for subjecting a woman to online harassment when it shared her Facebook post criticizing police actions during a controversial arrest caught on video.

The woman saw the arrest outside her window on June 11, and said police caused "excessive harm" while kneeing and repeatedly kicking a man being arrested in the Exchange District.

Winnipeg police included her original post in their online response, after which she was subjected to online abuse, including death threats, she previously told CBC News.

Spokesperson Const. Rob Carver said the police service didn't consider those consequences when it shared her post to tens of thousands of people.

"I think we did harm to a private citizen and I think we've looked at that, and if I had a chance to talk to the woman, I would offer my apologies as a media officer," he said in an interview Friday.

"That was not where we expected it to go."

He said the WPS Facebook post that included the woman's message was trying to counter the "negative narrative" that officers' use of force in the arrest was inappropriate.

Carver said he was appalled to hear the woman was targeted. She has since deleted her Facebook page.

"I think knowing that people do that now, so easily, I think we would certainly be more delicate or hesitant in how we approach the private account."

The woman declined an interview for this story. CBC News is choosing not to name her.

Some experts in law enforcement and social media condemned Winnipeg Police Service for their behaviour.

"It's really pretty unprofessional and, as members of the law enforcement who are basically sworn to be advocates for public safety and security … they should have known better," said James Walsh, an assistant professor of criminology at Ontario Tech University who has written on social media and policing.

The woman framed her June 11 Facebook post as a monologue directed at the stranger who she saw chased, tackled and kicked by police.

"Young man what did you do," her post began.

"You were on the ground already when big boots decided it wasn't enough and took his feet to your face and ribs, but I think that was more than enough."

WATCH | Video of police arresting, kicking a man on the ground: 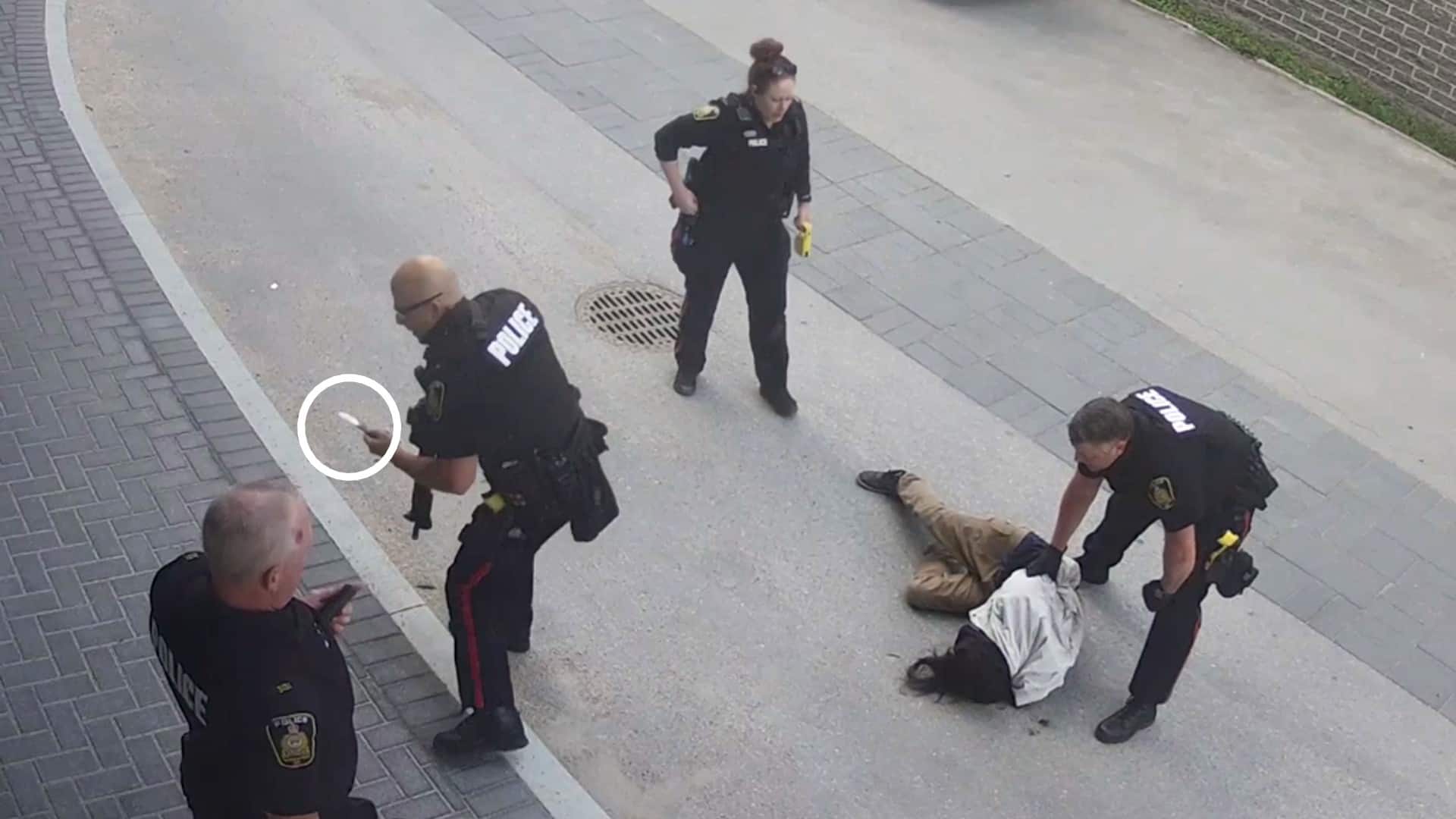 7 months agoVideo
3:10
A surveillance video supplied by the Winnipeg Police Service shows officers using force to arrest a man they say was armed with a knife and a heavy bar. 3:10

The 33-year-old man was arrested after smashing a window at the Centennial Concert Hall with a brick. Police say there were reports he had a gun. He dropped the weapon, which turned out to be an Airsoft gun, and refused to comply when police tried to arrest him.

One officer kneed the man in the side, and another, holding a carbine rifle, walked up and kicked him twice in the shoulder.

At a news conference the next day, police spokesperson Const. Jay Murray said the use of force was justified, and that police found the man had a knife during the arrest. "That kick likely saved his life," Murray said, since if had tried to reach for the knife, police would potentially be in a "lethal force encounter."

Murray also defended the service's decision to share the woman's Facebook post. He said police have "an obligation to correct misinformation" and it is a good reminder for people to be careful about what they post online. 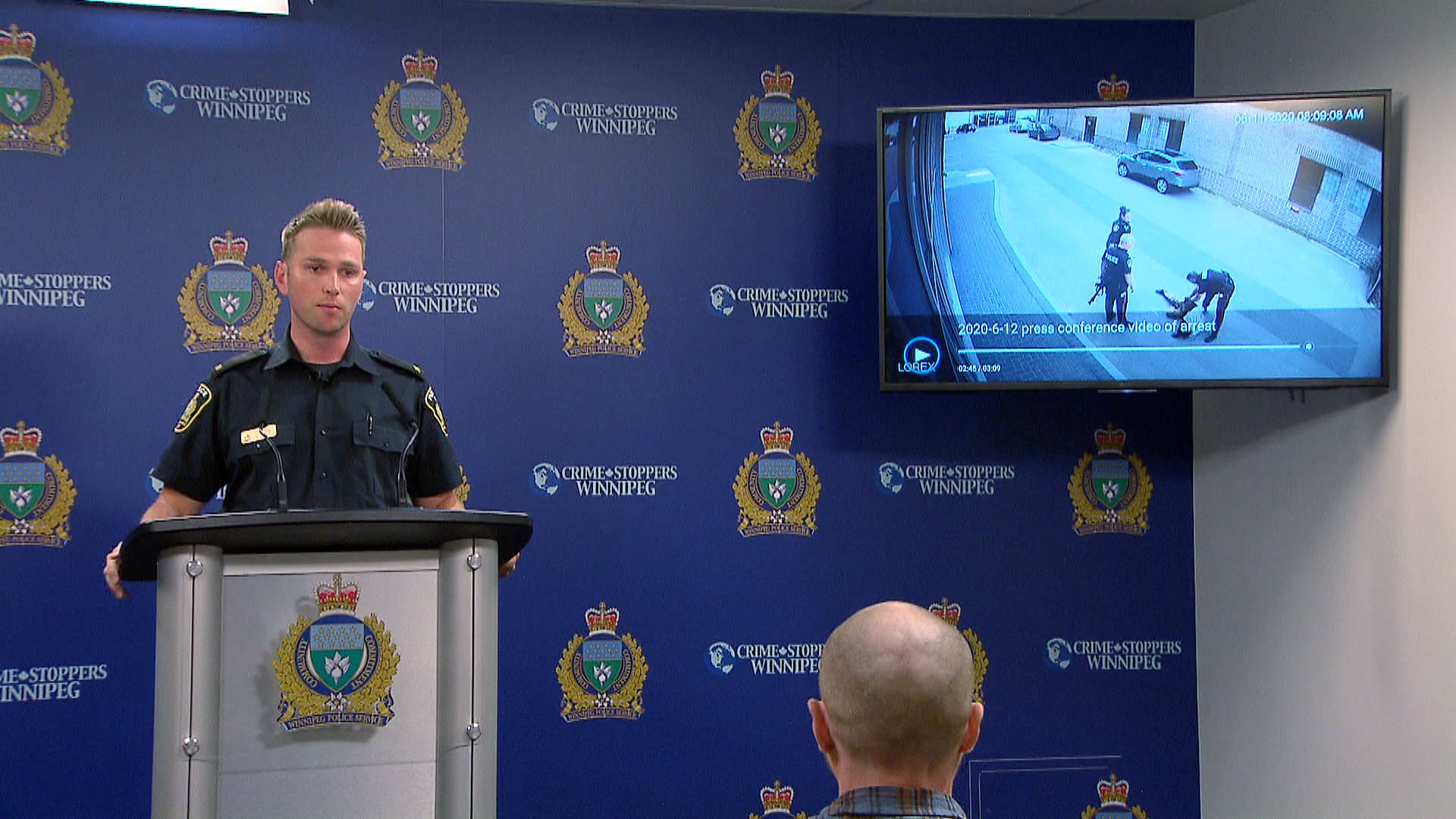 'An obligation to correct misinformation:' Winnipeg Police on social media

7 months agoVideo
1:26
Winnipeg Police Service Const. Jay Murray responds to questions on June 12 regarding the police's decision to share online a woman's Facebook post that was critical of a video showing Winnipeg police officers kneeing and repeatedly kicking a man. 1:26

Those explanations don't satisfy Walsh, who spoke with CBC before police made their apology.

"Not only did they [initially] fail to denounce the fact that this woman is being harassed and being subject to death threats online, but at the same time [are] … basically blaming the victim here, and implying that she should have known better."

That incident is another sign WPS is taking an adversarial stance against online critics, Walsh said.

In recent weeks, the service used Twitter to defend the presence of its helicopter overhead at a June 5 Black Lives Matter rally.

There is nothing violent about the helicopter being in the area. It's used at most large events throughout the year. It plays an important role in managing the impact of such events on traffic.

The same account challenged people who said police conduct in the June 11 Exchange District arrest was excessive, since the suspect was armed with an Airsoft gun. The WPS said it didn't know that at the time.

Prior to that, the WPS Twitter account also sparked a long series of replies when it corrected a CBC reporter on Twitter for describing the service's armoured response vehicle as a "tank."

"I think they risk kind of further driving a wedge between themselves and certain members of the public," Walsh said.

Christopher Schneider, a sociology professor at Brandon University, has written a book on police use of social media.

He said police services have used social media to define the narrative, but it can turn against them, evidenced by mass protests against anti-Black racism and police brutality across North America, partially fuelled by videos shared on social media.

That climate, which includes a growing push to defund or reform policing, may colour the Winnipeg Police Service's approach to social media, Schneider said.

"I think there is a widespread belief by police that the institution is under attack by the public."

Police should be held to a higher standard online because officers work for the public, he said, and in particular, WPS should have known better than to highlight the opinion of a private citizen on Facebook.

"I don't think they personally should continue on this choice," he said of their strategy.

She sees the Winnipeg police social media approach as one of correcting misinformation.

"Social media is a weapon and these protesters and the people who are backing them know that it's a weapon, and they're very structured, very organized," Stevens said on the phone from the Washington, D.C. area.

"For the police to say nothing or to just sit back and let it happen, in my opinion, would be the problem."