'They want to bless each other': New Winnipeg pizzeria lets customers donate a slice to others in need

A North End Winnipeg takeout pizza place is using sticky notes and the generosity of strangers to help feed hungry people who can't afford their food.

A North End Winnipeg takeout pizza place is using sticky notes and the generosity of strangers to help feed hungry people who can't afford their food.

Vikas Sanger opened SFC Pizzeria on Salter Street near Selkirk Avenue in May. Right away, he started getting customers coming in hungry who didn't have enough to pay for a $1 piece of pizza.

"They want free food because they are hungry, they [aren't] even wearing proper clothes," said Sanger, who moved to Canada from India in 2010.

"In our culture … if somebody comes and asks for food, we cannot deny them, because they are hungry. … But I just opened a new restaurant, so I cannot afford to [give] everything free."

He talked it over with his wife, Shivani Sanger, and they came up with a solution: customers with the means have the option to donate a dollar and write a message on a sticky note, which they stick to a wall under a "pay it forward" sign.

When somebody comes in who needs something to eat, they can grab a sticky note from the wall and redeem it, either for a slice of pizza or anything else in the store.

Already, the wall has filled up with notes carrying sweet messages of support: "May you find some magic in today," "You are light and happiness," and "Have a very pepperoni day."

"Somebody comes and they take the sticky note … they can choose which blessing they need," Sanger said.

"What else you want as an owner, or as a person, or as a human, to see a smile on someone's face because of you, or because of your donating [customers]?"

'They want to bless each other'

Sanger bought a vacant gas station on Salter Street in 2016, and built the business to include a small convenience store and laudromat before expanding to include take-out pizza, too.

Since they started the sticky note plan, which they call the "pay it forward program," Sanger said he's had people come in and try to buy a slice of pizza with 20 cents or 50 cents.

But he's been able to tell them to keep their change and help themselves to some free food.

"We all are doing this. It's not only us," Shivani Sanger said. "We came up with the idea … but people are so good, people are so nice, that they want to bless each other." 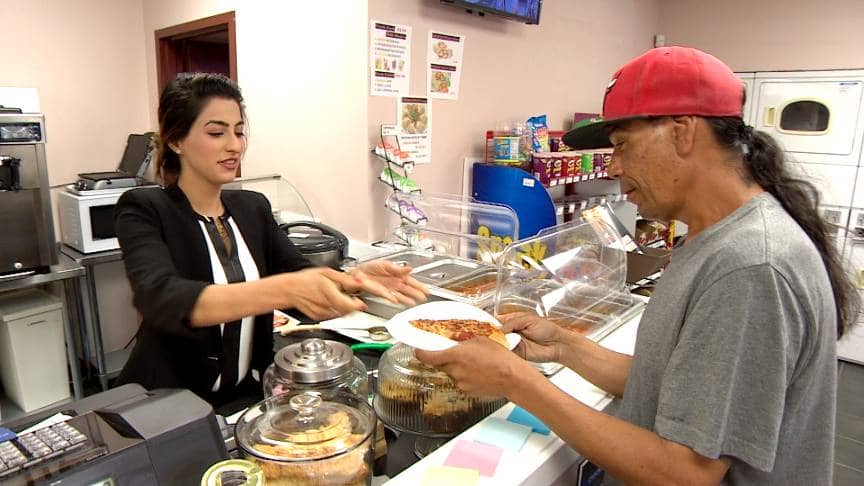 With files from Janice Grant