Winnipeg has seen some pretty cool concerts over the years, but nothing quite as cool as a pair of shows set to kick off the New Music Winnipeg Festival (NMWF) next weekend.

Winnipeg has seen some pretty cool concerts over the years, but nothing quite as cool as a pair of shows set to kick off the Winnipeg New Music Festival (WNMF) next weekend.

These shows promise to be downright freezing.

Terje Isungset — a Norwegian musician who builds his own instruments out of ice — will open the festival with concerts at a specially-built outdoor auditorium on the river at The Forks.

"It'll be a really beautiful performance," said Peter Hargraves, a Winnipeg architect and the man behind The Forks' annual warming hut competition, which is working with WNMF to produce the chilly shows.

The concerts will see Isungset playing a suite of his original music, featuring vocalist Maria Skranes and percussionists from the University of Manitoba music program performing on the musician's ice instruments, carved from blocks of ice harvested from the Red River.

Hargraves and Luca Roncoroni, an architect from Norway who specializes in building with ice and snow, were on the river near The Forks on Sunday, braving frigid temperatures to work on building the ice instruments for the shows.

The instruments, mostly percussion-based, are being carved out of 50-centimetre thick blocks of ice, explains Hargraves.

"It's beautiful clear ice that comes out of the Red River," he said.

It's not the first time Roncoroni has worked with ice from the Manitoba river.

The architect, who has been working with snow and ice for 20 years, has been coming back to Winnipeg every winter since 2012 to take part in the annual warming hut competition.

And while he's never seen the Red River in the summer, he's seen photos of the murky water when it's not frozen, and understands the look of surprise most Winnipeggers have when they see just how clear the ice blocks are.

Believe it or not, they're so clear, Roncoroni says he can read a newspaper through a block that's a metre thick.

"During the freezing process all the sediment kind of sinks towards the bottom, so they don't get trapped in the ice block," he explained.

"It is really, very beautiful ice."

Roncoroni, who works on projects around the world, including the Icehotel in Sweden, only works with natural ice, which means it is harvested from rivers and lakes.

He says he enjoys the ephemeral nature of the unique building materials.

"They'll always disappear — they have a short lifespan, and they're changing all of the time," he said.

"It's a very dynamic material … when you work with ice and snow you can't control every single detail because it's a material that's so alive, and it's changing so fast.

"I like the fact that we kind of lose a little bit of the control that we normally would like to have."

Work on the 500-seat auditorium for the shows, called Pavilion Sub-Zero, was also coming along Sunday.

Architecture students from the University of Manitoba designed the venue, described as "a shimmering, colourful cloud floating above performers and audience members."

Loosely based on the design of a star blanket, it will be a "tensile structure [that] will support 'the cloud' of screens that will animate the entire space with colours and varying levels of luminance, creating an infinite array of patterns on the ground," the designers say.

Music fans who brave the cold for the Friday and Saturday performances can keep warm with a bar at the unique venue run by the Festival du Voyageur, says Hargraves. 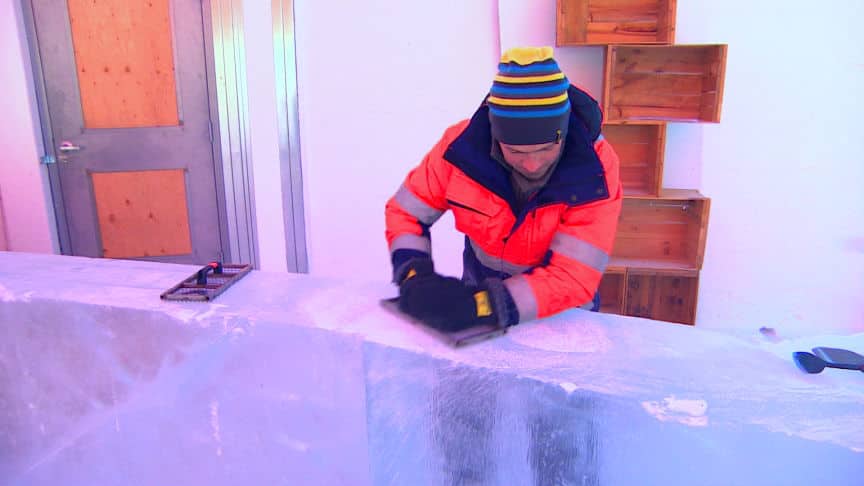 Instruments and outdoor auditorium built out of ice