Three new memorials for workers killed on the job aim to deliver the message that all workers deserve to come home alive.

Last year, 27 people in Manitoba lost their lives due to the work they did.

And one in every 10 young people who go to work in the province report an injury to the Workers Compensation Board.

Those were some of the statistics heard Friday, as three new Winnipeg memorials for people killed on the job were unveiled, aiming to deliver the message that all workers deserve to come home alive.

About 300 people marched from Winnipeg's Union Centre on Broadway to Memorial Park on Friday, one day before the National Day of Mourning, observed every April 28 to remember those killed or injured in workplace incidents.

A sod turning ceremony was held in the park for three new memorials — one for peace officers, one for firefighters and one for other workers.

"It's important to remember that this is still an issue in Manitoba and regardless of what your role is in a workplace, we should be focused on reducing injuries and especially those most significant tragedies, those fatalities," said Jamie Hall, chief operating officer of Safe Work Manitoba.

The trend over decades has been a decrease in workplace-related deaths, but the number has held relatively steady for the last half-decade or so, Hall said. Of the 27 deaths last year, about half were from illnesses related to work.

"Certainly the acute fatalities, where someone goes to work one day and loses their life, is a focus on our programs. But we also want to look at those exposures that may be happening today that may not have an impact for another 10 or 15 years," Hall said. 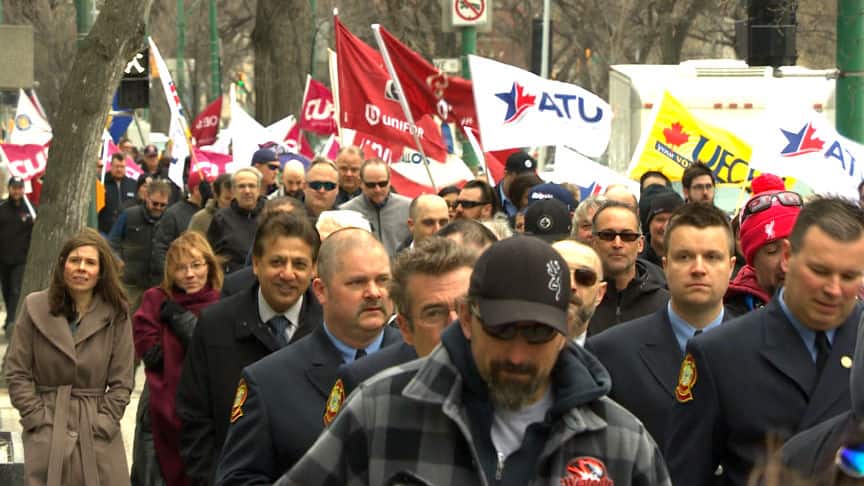 Honouring workers who died on the job

3 years ago
1:10
A solemn march in downtown Winnipeg Friday, honouring workers injured or killed on the job. 1:10

"They're used to being told what to do by adults and they accept things that they might not have to do at work. So our job is to teach them that they have the right to refuse unsafe work, to spot the hazard, those kinds of things," he said.

About 50,000 young people go to work each year in Manitoba. About 5,000 are reported injured to the Workers Compensation Board, and Reimer said the number of injuries might even be higher.

Hall said Safe Work Manitoba is pleased employers across the province are signing on to a certification program to make workplaces safer.

With files from Marianne Klowak