Some of Winnipeg's mayoral contenders are taking issue with a label that was recently bestowed upon them in the media: "fringe candidate." 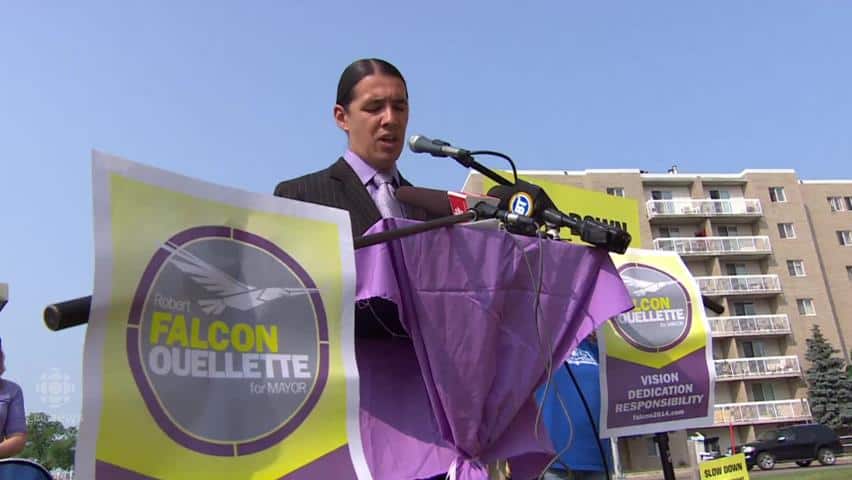 6 years agoVideo
1:49
Some of Winnipeg's mayoral contenders are taking issue with a label that was recently bestowed upon them in the media: "fringe candidate." 1:49

Some of Winnipeg's mayoral contenders are taking issue with a label that was recently bestowed upon them in the media: "fringe candidate."

A newspaper report suggesting that some of the seven Winnipeggers vying for the mayor's job in the Oct. 22 civic election are fringe candidates has started an online debate over "mainstream" versus "fringe" and who decides which candidates fall into which category.

Robert-Falcon Ouellette, for one, says he does not feel like a fringe candidate.

"No, I feel like a professor from a university who's running for elected office. That's what I feel like," said Ouellette, who was the program director with the Aboriginal Focus Programs at the University of Manitoba before he entered the race.

Ouellette said he has prepared extensively for his campaign, and he believes being outside the mainstream political establishment should not put him on the fringe.

We've taken the chance to do this, and we should all be treated fairly.- Mike Vogiatzakis

"I understand that, you know, I'm not the usual type of candidate you're going to see in an election," he said.

"Usually you're finding people who have been in elected office previous to that or who [are] connected to the political structure, and I think I'm a little bit on the outside of where most candidates would come from."

Ouellette added that he knows people on Twitter and Facebook are debating whether his aboriginal heritage may have contributed to the "fringe" label being applied to him, but he said he hopes not.

Another mayoral candidate, Michel Fillion, said no political candidate should be labelled by the media.

"Media should cover the whole spectrum and let the voters decide for themselves who they want to lead them, not imposing their own opinions to readers or viewers in order to have them vote in a certain direction," Fillion wrote in an email to CBC News.

"Truth and honesty — isn't that the key issue in what we are missing at city hall?  Has media forgot about this when reporting by not applying it to themselves?"

Mike Vogiatzakis agreed that voters should decide who is on the fringe, not the media.

"We're all people, we're all running in this election. You know, it's a tough job, we've stepped forward and we've taken the chance to do this and we should all be treated fairly," he said.

"There's no such thing as a fringe candidate or a candidate that's … better than the other."

Vogiatzakis added that the media should cover all candidates equally, as it's disheartening when he holds a news conference and gets little response.

Political scientist Chris Adams says most candidates hate the "fringe" label, but it's fair to apply the term to candidates who have little support among voters.

"If candidates are running with clearly tiny margins of support, I think it's quite legitimate for a political reporter to use the term 'fringe' candidate," he said.

Both Adams and Ouellette noted, however, that Calgary Mayor Naheed Nenshi was once considered to be an underdog, and these days he's one of the most popular politicians in Canada.

With files from the CBC's Sean Kavanagh