The Canadian federal government is scrambling to figure out how a sniper rifle made in Winnipeg may have fallen into the hands of Houthi fighters in Yemen's civil war. 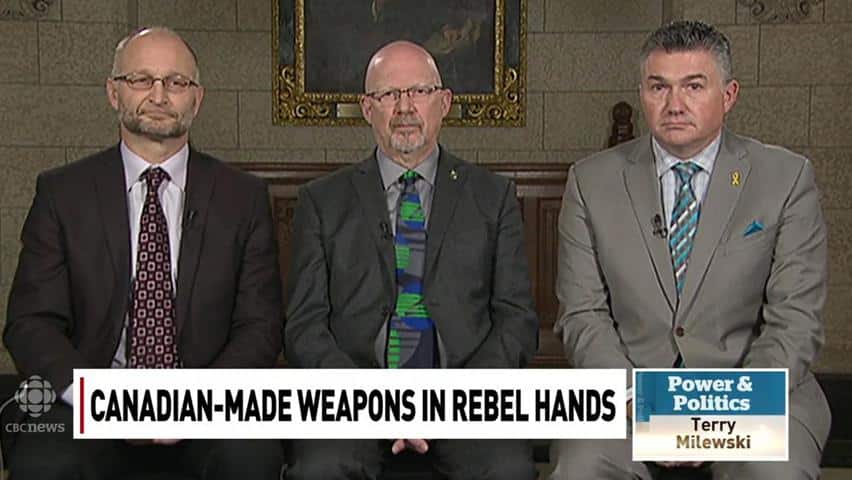 The Canadian government is scrambling to figure out how a sniper rifle made in Winnipeg may have fallen into the hands of Houthi fighters in Yemen's civil war.

"The minister for international trade met with officials in the department. She's instructed them to investigate to make sure that we illuminate all four corners of this story."

According to Armament Research Services (ARES), an international intelligence consultancy that traces arms, LRT-3 sniper rifles sold to the Saudis for self-defence appear to have been seized from Saudi forces.

The guns, made by Winnipeg-based PGW Defence Technologies, were identified in photos and video on a Houthi-linked television channel and on social media. They were held up as "modern weapons" taken during a battle with "Saudi border guards."

The case has raised new concerns about Canada's arms exports to Saudi Arabia. While Ottawa hasn't yet been able to confirm how the rifles made their way into rebel hands, Lametti said the Liberal government ran on a platform of openness and will keep to its promise in this case.

"We committed ourselves in the election campaign to greater transparency on these kinds of transactions — we intend do that," he said. "Moving forward, that's precisely the direction in which this government wants to go."

Conservative defence critic James Bezan echoed Lametti's concerns about how the Houthis got the guns, but he remains confident the original arms deal with the Saudis was done with the utmost care.

"There is some concern that maybe they were either sold on the black market, or somehow they captured these arms and that is the huge issue here … how they got a hold of them," Bezan said.

"Regardless, we have a trusted ally in Saudi Arabia. We made sure that in all the arms deals we're doing, including these arms that are made in Winnipeg — which are used by our Canadian troops as well as the British and other countries — that they are being sold for the purposes of their defence of Saudi Arabia.

"And they passed all the tests, and foreign affairs did a very diligent job in going through the export arms control before they issued the permits."

NDP defence critic Randall Garrison said there is an easy way to confirm Bezan's claim about the nature of the initial deal with Saudi Arabia.

"If the permit was duly issued, then let's see the human rights report on which it was issued that the Conservatives used," Garrison said. "There's no reason that should not become public right now, and we can see whether these arms should've been sold to Saudi Arabia or not."

Manufacturer PGW Defence Technologies declined to confirm the guns in question came from them, saying only that all its exports follow Canadian export rules.

According to a CBC News analysis, Saudi Arabia is Canada's second largest weapons customer after the U.S. Over the past decade, Canada has shipped more than $28 million worth of Canadian-made guns and rifles to Saudi Arabia.

Whether the sniper rifles in this case were sold while the Conservatives were in power or not, Garrison said Canada needs to improve how it monitors the path and life cycle of firearms it sends overseas.

"Small arms are the scourge of these kinds of conflicts," Garrison said. "Canada can and must do better. Whether it's arms that pass through the Saudis or anybody else, we certainly had a commitment from the Liberals in the campaign to get started on better monitoring on what happens to these small arms."

Part of PGW's booth fee was refunded from a $618,000 federal fund given to the Canadian Association of Defence and Security Industries (CADSI) by Western Economic Diversification, a federal department devoted to improving the quality of life for western Canadians.

Announced by the Harper government in 2013, the fund was intended to promote international success for western Canadian defence companies.

CADSI would not reveal how much money went to PGW Defence Technologies and also declined an interview.

"In accordance with CADSI's agreement with Western Diversification Canada (WED), support to participate in our WED-funded events is made available to all western companies in the defence and security industries." said CADSI President, Christyn Cianfarani in an email.

"Other associations also receive WED funding for the same types of export-related activities for their industries," she said.