A screaming, whooping crowd of hundreds of Jets fans broke into O Canada in the middle of Portage and Main Thursday night, in the wake of a historic, 5–1 win against the Nashville Predators.

A screaming, whooping crowd of hundreds of Jets fans broke into O Canada in the middle of Portage and Main Thursday night, in the wake of a historic, 5–1 win against the Nashville Predators.

"This is absolutely huge. This is the little team that could," said fan Marjorie Roden at Bell MTS Place.

"And you know what? I think they're probably going to get to the cup final, if they don't take it all."

There were no players on the ice, but thousands of fans exploded with cheers in the arena as the final seconds drained off the clock in the last game of the second round in Nashville, Tenn.

"I can't describe it. The energy in this building right now is nothing I've ever felt as a Jets fan, ever, ever," fan Chad Townsend shouted over cheers.

Townsend was one of thousands of Winnipeggers who watched the Jets make history on the big screen at Bell MTS Place, more than 1,500 kilometres away from the game itself.

The Jets beat the Preds in their fourth game at Nashville's Bridgestone Arena and the seventh game of Round 2 of the NHL playoffs. 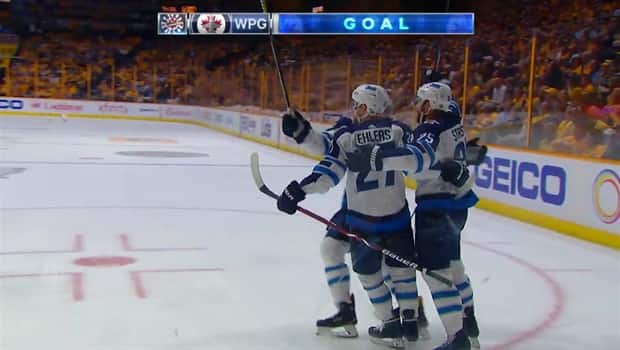 The win clinched the Jets' place in the Western Conference final on Saturday.

No Winnipeg NHL franchise has ever advanced past the Round 2 of the post-season.

In fact, the Jets made history in Game 1 of the series, winning the first Round 2 NHL game of either the Jets 1.0 or the current franchise, formerly known as the Atlanta Thrashers.

Watch fans revel at Portage and Main, breaking into O Canada at the end: 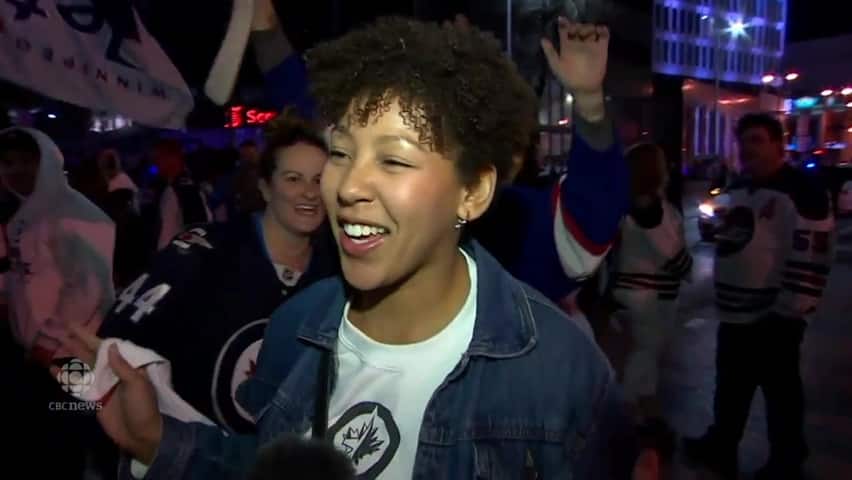 'A great day to be alive': Jets fans swarm Portage and Main after Game 7 win

3 years agoVideo
1:07
A screaming, whooping crowd of hundreds of Jets fans broke into O Canada in the middle of Portage and Main Thursday night, in the wake of a historic, 5–1 win against the Nashville Predators. 1:07

"That's a solid win, great game. That's all you can ask for on a Thursday."

Throughout the game, goaltender Connor Hellebuyck made 36 saves and Paul Stastny had two goals and an assist.

Mark Scheifele also scored twice, including one into an empty net, while Tyler Myers had the other goal for Winnipeg. Kyle Connor and Blake Wheeler each had two assists. 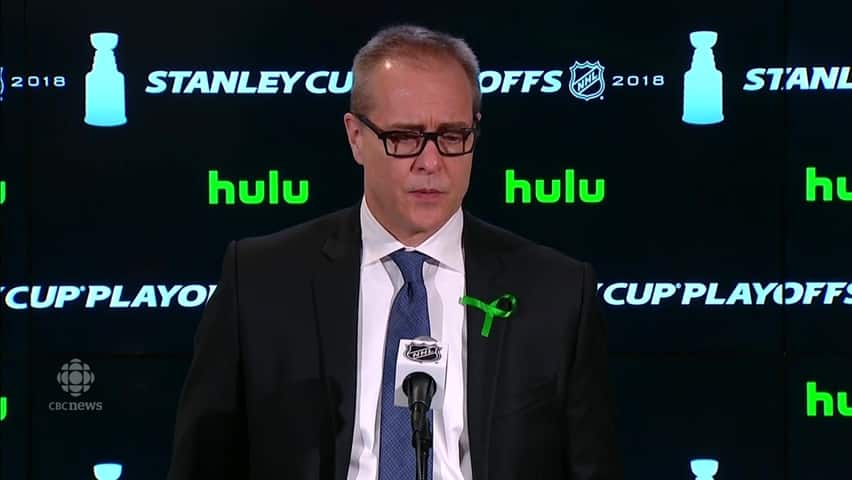 After the game, hundreds of fans poured onto the street at the intersection of Portage Avenue and Main Street.

"It's a wonderful time to be alive," said Brett Ryall.

"It's beautiful. If they make the Cup, that'll be out of this world," Trygvason said. "But right now, this is quite a moment, and we're all really happy to be Winnipeggers tonight."

The Jets will host the Golden Knights in Winnipeg on Saturday.

Tickets for all of Winnipeg's home games in the series will be available to the public Friday at 10 a.m.

With files from Jill Coubrough and The Canadian Press's Joshua Clipperton