Winnipeg Jets fans cheered at the corner of Portage Avenue and Main Street late Thursday night after the team secured a spot in the NHL playoffs. 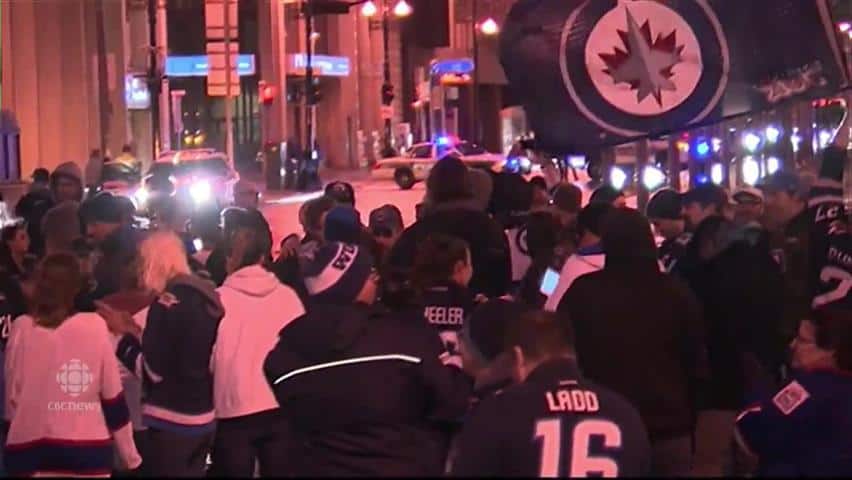 6 years agoVideo
1:09
Winnipeg hockey fans converge upon the corner of Portage and Main after the team clinched a spot in the NHL playoffs. 1:09

It's official, Winnipeg Jets fans: the team is going to the NHL playoffs.

While the Jets lost to the Colorado Avalanche 1-0 in a shootout on Thursday night, the team squeezed into the playoffs as a wild card after the Calgary Flames defeated the Los Angeles Kings 3-1.

As a result of Calgary's win, the Kings — the defending Stanley Cup champions — were eliminated from playoff contention.

The Jets will host the Flames at the MTS Centre on Saturday afternoon.

The Winnipeg Jets are making their first playoff appearance since the franchise relocated from Atlanta for the 2011-12 season. The previous Jets franchise, which moved to Arizona, appeared in the postseason for the last time on April 28, 1996.

1 of 0
A crowd gathered with flags, horns and cowbells at the intersection of Portage Avenue and Main Street after the Calgary game was finished to celebrate the Jets' journey into the postseason.

"It's like the best thing that could ever happen to me right now," said Marialys Gonzalez Cruz, who watched both games at the Shark Club downtown.

"I love it and I think we have an amazing chance and we're going to make it."

Gary Siemens, who also watched the games at the Shark Club, said he looks forward to cheering for the home team during the playoffs.

"I've been a Jets fan forever, so it would be amazing for this city and I think it would like winning the Stanley Cup right now," he said.

The celebration also erupted on social media, with hockey fans tweeting from Winnipeg and beyond.

Winnipeg will finish either seventh or eighth in the Western Conference and travel to St. Louis or Anaheim next week for their first playoff contest.