Winnipeg Jets forward Evander Kane is in hot water over $650 in unpaid traffic tickets, including one fine for texting and driving and another for driving without a valid licence. 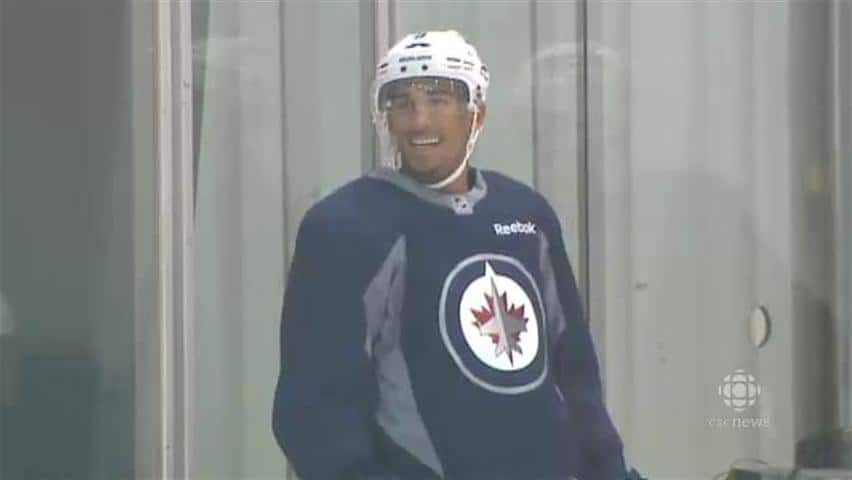 In June 2012, Kane was fined $249.80 for texting while driving in Manitoba. Then in October, he was fined $311 for driving without a valid licence, also in the province.

But Kane, who recently signed a six-year, $31.5-million contract, did not pay the fines or appear in court to face the charges.

Brown called the situation a "misunderstanding" and said the team paid the fines on Kane's behalf and Kane has repaid the team.

"The Winnipeg Hockey Club did pay the fines and then Evander worked with us and repaid us," he said.

Brown said the 22-year-old Kane just "forgot" about the tickets.

"It's a set of unfortunate circumstances … that could have happen to a lot of people and just happened to happen to Evander Kane, which of course he comes with a spotlight."

No memory of tickets

On Thursday, Kane told reporters that the tickets came so long ago that he doesn't even remember what they were for.

"It's just something that I guess I thought I had taken care of before. It came a little bit by surprise, but it's rectified and taken care of now," he said.

Kane agreed that it's generally not a good idea to text and drive, even though he has no recollection of being nabbed for it over a year ago.

"You know what? I don't really remember what it was for. I just know there was a outstanding balance," he said.

"But on that subject, you know, obviously it's very dangerous and you know, I don't recommend it to anybody."

With the fines now paid, Kane said he wants to put the situation behind him and focus on the upcoming NHL season.

But some of the forward's fans are calling on him to apologize.

Lori Pike and her 22-year-old son have followed Kane's career since his junior hockey days, and she said Kane's behaviour shows immaturity.

"I wouldn't make a murder trial over it, but he should be responsible for what he does," Pike said.

"Come on, fella, you get paid enough. Pay your fines."