A handful of people who were part of a nationwide protest at Winnipeg City Hall Saturday were drowned out by hundreds of others there to promote a message of love and inclusion. 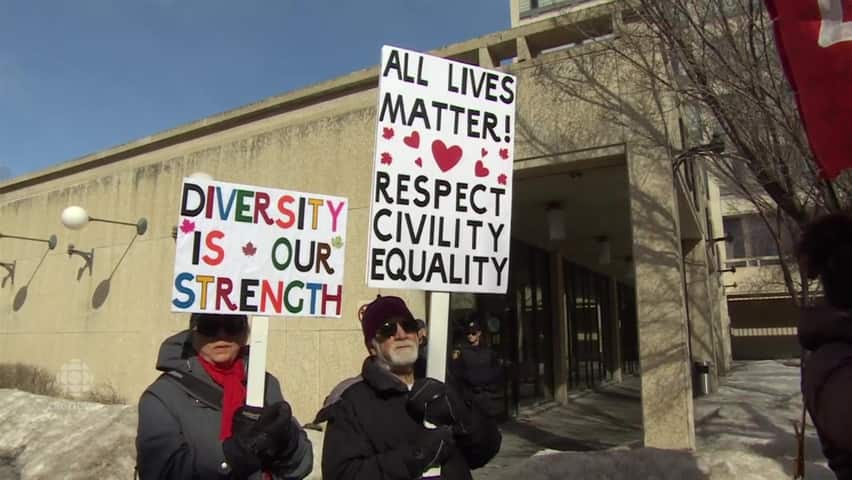 4 years agoVideo
1:33
A handful of people who joined a protest at Winnipeg City Hall Saturday — one of a series of protests nationwide — were drowned out by hundreds of others there to promote a message of love and inclusion. 1:33

A handful of people who joined a protest at Winnipeg City Hall Saturday — one of a series of protests nationwide — were drowned out by hundreds of others there to promote a message of love and inclusion.

Protests were held across Canada both against and in favour of Motion 103, which calls on the government to "recognize the need to quell the increasing public climate of hate and fear."

"I feel empowered by the people that have shown up as a counter-protest for the hate that was being incited in the city," said Sara Barsky, who confronted one of the few protesters.

The man was holding a pink sign with what he said was a verse from the Qur'an that read, "Men have authority over women ... beat them."

"I was really frustrated as a Jewish queer woman here. That is the sort of propaganda that was used to incite hate in World War Two and led to genocide. I think it's a no-brainer: we need to stop this systemic hate the way it's starting right now."

The man with the sign is misrepresenting Muslims and his sign used a translation not intended to be taken literally, according to Idris Knapp, the executive director at the Winnipeg Central Mosque.

"We already have laws in this country that protect us from hate speech and discrimination. And we should celebrate that as Canadians and not be at each other's throats," he said.

Simon Davis is from Winnipeg and isn't "much of a protester" but wanted to send a message to the people rallying against M-103.

"Just to tell people that we don't put up with that shit in this town," he said.

"Somebody had the good sense to get rid of his sign for him and he appears to have run away too," he said of the man with the pink poster.

"There were a couple, just over on the other side there was a woman with a no-Shariah law sign, and she just sort of scuttled off into the shadows like those people are wont to do when confronted with the massive decent humanity which is our city."

The rally featured several musical acts, speeches and many chants and cheers of "love conquers hate."

Jacob Green said he attended to protest Shariah law, an Islamic system often affiliated with ISIS. Some say Motion 103 opens the door to bringing it to Canada.

"I'm just here with my family, checking out the protest, seeing what's going on with it, seeing how many people are for all these immigrants coming in, imposing their Shariah law on to us," he said.

"We're not promoting hate at all. We're expressing our rights and freedoms," said Green, who added that he's a pagan.

But hundreds of Winnipeggers came out to back a pro-Muslim message, holding signs that read "love" or "Muslims welcome in Manitoba."

"It was beautiful, there was an array of people, every creed, every religion, everywhere; it's just great to see everybody to come together, black white brown, it's all unity," said organizer Lu Trotman.
1 of 0

"It was important for me to show up to show that I do not agree with that and I will not allow them to speak for me," he said.

He believes some people are taking the motion out of context.

"It's a motion condemning violence and Islamophobia," he said. "We've had similar motions in the past for victims of other racially or religiously fuelled violence, and I see no reason why we shouldn't make the same statement for our Muslim countrymen and women. It only makes sense."

Several police officers were on scene to avoid clashes.

Motion 103 up for debate

Motion 103 was tabled by Mississauga, Ont. Liberal backbencher Iqra Khalid last fall, but will be debated in Parliament on Wednesday in the aftermath of January's mass shooting at a Quebec City mosque.

It calls on government to "condemn Islamophobia and all forms of systemic racism and religious discrimination."

The text of the motion also asks the government to:

The motion has generated a backlash online, with petitions garnering thousands of signatures opposing the motion.