Five buildings in and around Winnipeg's Exchange District will be reviewed for their heritage status. Owners want some flexibility on what should and shouldn't be preserved.

It would be a challenge to squeeze a pencil in the gap between the buildings at 310 and 312 Ross Avenue in the Exchange District — the space is that tiny.

Yet both buildings have separate titles and both properties are being reviewed for their status by the city of Winnipeg's historical buildings and resources committee.

The two property owners have similar views on preserving buildings in the exchange, but differ on accepting heritage status.

The committee will look at five downtown Winnipeg buildings this week and their owners are not all on board with the possibility of having their properties listed as a historical resource.

The committee, made up of councillors, architects, engineers and representatives from other levels of government, will review conditions to maintain and preserve the five buildings and send their recommendations to the property and planning committee and ultimately to city council to be voted on.

Architect Wins Bridgman represents the Toronto owner of the 310 Ross Avenue property, known as the Leadley building. His clients welcome a heritage designation, but they also want some flexibility in what that means.

"It is not a fight between heritage and developers. It is trying to work through something where there is a balance," Bridgman said.

In the case of the Leadley building, the owners have plans for offices on the upper floors and a restaurant on street level. But those plans mean some alterations to the property.

The building's fire escape has become a ladder for intruders into the building and given access to the roof for party-seekers.

Bridgman says his client would like to cut back access to the fire escape from ground level, convert the back loading dock to a patio for the restaurant and retain the original windows on the main floor, but eventually replace the upper story windows with more energy efficient ones.

The architect says Winnipeg's century-old downtown buildings haven't gained the economic value seen in cities such as Toronto — yet. But he says they will, and it will require flexibility from all sides to make heritage status both work to preserve and make money for property owners.

"We have this huge resource in Winnipeg that is going to be of real estate value and in a way it is a lack of imagination that the city and individuals have some times, to say, actually heritage is on our side. It's not an opposing force," Bridgman told CBC News.

It's windows that concern the owner of the neighbouring Tree-Springs building at 312 Ross Ave.

Laurie Gorenstein purchased the building in February and was contacted by the city in May about heritage status for the property.

Gorenstein retained an architect and got legal advice as he and the city talked about what the conditions might mean for his building.

Ultimately he decided to reject a heritage designation.

He says retaining the facade and keeping the heavy timbers inside is fine, but he balks at conditions that would mean having to restore the many windows in the building.

Gorenstein says he loves the Exchange District and the look of the old buildings and says he has roots in the neighbourhood dating back generations.

"The Exchange is a great area ... the heritage, the look. My grandfather owned a building at Arthur and McDermot," Gorenstein said.

The businessman says he wants to preserve that look in his building, " but it can't be cost prohibitive to maintain."

Coming to market — garage 'office space' with an electric past

The black slate facade and distinctive wood doorway at 55 Princess St. doesn't give a clue to what lurks behind it.

The building's owner — Manitoba Hydro — will accept heritage status for the impressive front of the building, despite planning to sell the property in the near future.

If the building could talk it would tell stories through the '80s and '90s of mechanics fixing axles on police cruisers and vice officers interviewing suspects.

Even further back into its history, the building was Winnipeg Hydro's retail outlet for appliances. The building opened in 1919 to sell fridges and stoves to a public rapidly converting to electricity.

The building  is now owned by Manitoba Hydro through its purchase of Winnipeg Hydro in 2002; then it leased the property to back to the city of Winnipeg. The police service used it for vehicle maintenance and it housed the vice squad.

Little of the original character of the interior of the building remains as it morphed from retail showroom to auto shop on the main floor and interrogation rooms and offices on the second and third.

What is intact is the eye-catching exterior on Princess and a lone vintage staircase inside, built with heavy wrought iron supports.

Hydro spokesperson Bruce Owen says the company has agreed with the city to protect those elements of the building.

"It is difficult to see inside what is heritage. Because it has changed so much over the past 75 years," Owen says.

Owen says Hydro has no use for the building anymore, but a decision on when to put the century-old structure up for sale hasn't been made yet. 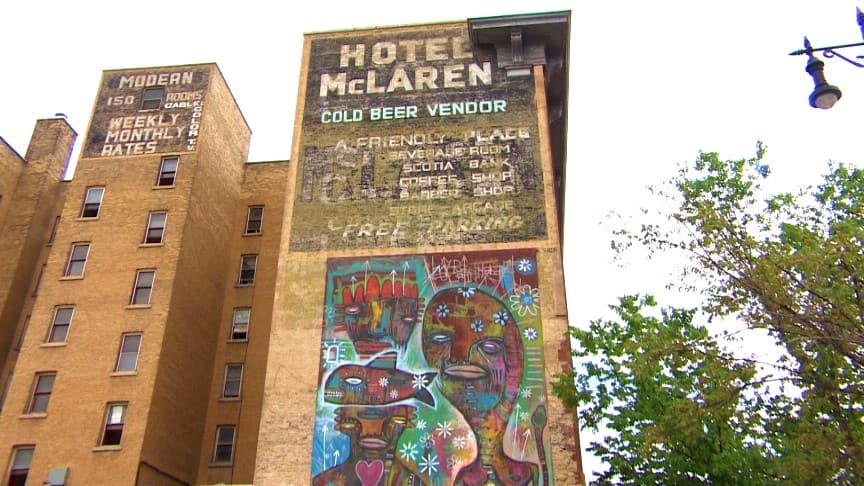 2 years agoVideo
2:32
Five buildings in and around Winnipeg's Exchange District will be reviewed for their heritage status. Owners want some flexibility on what should and shouldn't be preserved. 2:32
CBC's Journalistic Standards and Practices|About CBC News
now