Winnipeg Harvest is hoping people will step up and donate money to feed thousands of babies in need of formula. 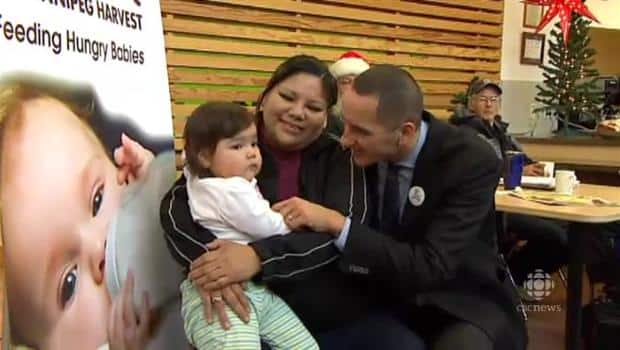 7 years agoVideo
1:46
Winnipeg Harvest is hoping people will step up to donate money and formula to feed thousands of babies in need of formula. 1:46

Winnipeg Harvest is hoping people will step up and donate money or food to feed thousands of babies in need of formula.

The food bank is facing major shortfalls in its Hunger for Hope program, which typically feeds about 1,600 infants per month.

The program needs about $200,000 per year to operate and distributes baby food and formula to families in need.

Mom Nichole Keeper said she relies on the food bank to keep her daughter Tashantay fed.

“For Christmas coming up, it’s been hard for the last month and a half because I had to get her presents and food for her and stuff around the house,” she said. “It was quite a struggle.”

You're invited to drop off infant formula donations at CBC Manitoba at 541 Portage Ave. between 9 a.m. and 5 p.m., Mondays to Fridays.

Also, join us on Dec. 13 for Harvesting Hope, a full day of programming on CBC Radio One, CBC News: Winnipeg and cbc.ca/manitoba to support the food bank.

Keeper said she wouldn’t have been able to feed her daughter if it weren’t for formula she received from the food bank.

A tin of baby formula costs about $27, a big dent in the budget for low income families, according to Winnipeg Harvest’s Kate Brenner.

So far this year, the program has only raised about $100,000 — half of what it needs to keep the program running and formula stocked for children in need.

“What happens if we don’t have the money is we can’t purchase the formula, so it’s a very, very real need that we’re looking at here,” said Brenner.

On Wednesday, a shipment of formula was loaded up and sent to 328 agencies in Manitoba that rely on Winnipeg Harvest. All that was left after the shipment was 11 tins.

Officials are hoping the public will step up with donations to help cover the shortfall.