A Grade 1 class at Winnipeg's École Belmont is raising money for Nepal after a devastating, 7.8-magnitude earthquake hit the South Asian country on April 25.

"The money will be for buying medical kits... but more importantly food and water," students say 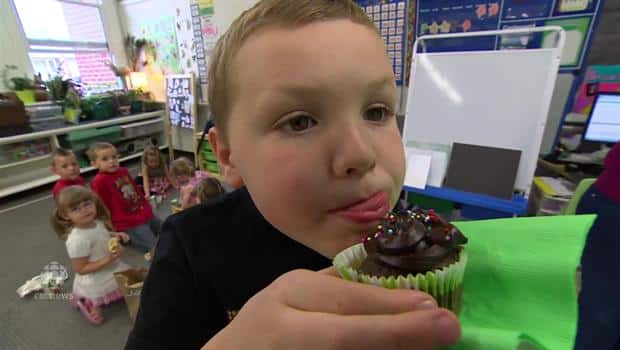 6 years agoVideo
1:51
A Grade 1 class at Winnipeg's École Belmont is raising money for Nepal after a devastating, 7.8-magnitude earthquake hit the South Asian country on April 25. 1:51

A Grade 1 class at Winnipeg's École Belmont is raising money for Nepal after a devastating, 7.8-magnitude earthquake hit the South Asian country on April 25.

The students came together to write a letter to take home to family, asking for donated baked goods.

"There was an earthquake that was really bad," it read.

"Lots of people died and there are lots of families who are suffering... There is hope for Nepal. Can you help us bake some stuff for the bake sale?"

On Thursday, cookies, brownies, cupcakes and other sweets were set up at the elementary school, and all money raised will be going toward "medical kits, cleaning supplies, building supplies. But most importantly, food and water," according to students.

The far-away tragedy hits home for the six and seven years olds in teacher Landon Gibson's Grade 1 class: Classmate, Pallista Shrestha, moved to Canada from Nepal when she was three, and she remembers her home there.

"When I went to my daddy's house it was this big but it was bigger than the school," she said.

Henry Pronyk, 7, loves to bake, and brought two sets of treats for the sale.

"I really wanted to help Nepal so I put my best effort into it," he said.

For 6-year-old Cassandra Carvalho, the sale means helping the Nepalese replace some of what perished in the quake.

"We did this so we can help them so they can get more healthier because they lost all their food and water and money and medicines."

Aside from the bake sale, some students found money to donate to the Red Cross in their mom's car or even looked to their own wallets and by Thursday afternoon, the class had raised more than $500.

École Belmont is still accepting donations, which can be dropped off at the school's office until Friday.