On Giving Tuesday, some Manitoba charities say they're stretched, stressed and 'falling behind'

It may be Giving Tuesday, but some smaller organizations say they're cash-strapped due to fewer Manitobans giving to charity in recent years.

It may be Giving Tuesday — the day following Black Friday and Cyber Monday when Canadians are encouraged to think about charitable giving — but some smaller organizations say they're cash-strapped due to a drop in the number of Manitobans giving to charity in recent years.

Daniel Emond, a board member at Lighthouse Mission — which provides meals and support to the city's most vulnerable — says his organization is about $80,000 in the red after not meeting its budget projections for the year, which has forced the mission to reduce its number of full-time staff.

While it once had four full-time employees working out of its Main Street location, the mission now only has one full-time and one part-time employee, he said.

"We're definitely noticing that we are falling behind," he said.

Lighthouse isn't alone in seeing that trend. A report published by the Winnipeg Foundation in April found that the percentage of Manitoban tax filers who claimed charitable donations declined from 31 per cent between 1997 to 2001, to 26 per cent between 2012 to 2016.

However, the average individual donation amount increased from $929 to $1,802.

"Manitoba is one of the most generous, amazing provinces, in terms of giving, probably in all the world," said Emond. But he thinks a number of factors are behind the decline in the number of donors.

"The trend is, if people don't have extra money to give, they can't give," he said.

"With the economy the way it is, and things the way they are, it's just been a harder year. People just don't have as much money to give."

Another local charity, Hands of Hope — which provides used furniture and household items to people in need — says it's facing a serious shortage of funds.

In a press release, the charity said it is looking for 850 donors to partner with, at $25 each per month, in order to continue.

The charity is also short 130 beds.

"We have 130 people on our waiting list who are in need of a bed, and we simply don't have them," said executive director John Van Leeuwen.

He said typically donations go down around the holidays, but he adds the demand for furniture is up.

In hopes of raising more awareness, Van Leeuwen issued a challenge to Winnipeggers to sleep on the  floor for one night.

"If you're sleeping on the floor you're tired and you can't focus, and a lot of people are doing that right now on a daily basis," he said.

"So we're challenging people to give it a shot, try it for a night, and then get back to us and let us know how you felt."

Overall, the decline in the number of donors poses a greater challenge for smaller organizations, said Rick Frost, the Winnipeg Foundation's CEO.

"On the smaller side, you're sort of disproportionately relying on donors, [a smaller] percentage of people who are giving."

The foundation's report, titled Stressed, Stretched and Still Standing, was based on Canada Revenue Agency data for all 4,400 Manitoba-based charities, as well as interviews with staff at 439 organizations.

The report found across the board, the charitable sector in Manitoba is stretched thin, and organizations across the board are having a hard time establishing a sustainable operating reserve.

But smaller organizations in particular are having a difficult time recruiting qualified staff and board members, and expanding their capacity to give, the report said.

Broadly, Frost said this decline in the number of people donating is because people have less money to give.

"When you look broadly at the trends, people are carrying more debt. There's a higher cost of living — faith-based giving is somewhat in decline because there's less participation in religion," he said.

"So there's been a number of negative factors."

However, Dave Feniuk, the general manager at Agape Table — another Winnipeg organization focused on feeding marginalized people in the city — said his organization hasn't seen the same decline.

"Winnipeggers have been very generous in helping us out to feed the marginalized. We haven't seen a decline in food, so we're able to feed upwards of 400 to 500 guests every morning," he said.

Though the Winnipeg Foundation's report did find a decline in the overall number of donors, Frost noted that the report wasn't able to capture the amount being donated through crowdfunding, because those donations aren't captured by CRA data, he explained.

"So people are giving millions and we can't see the numbers. I think that's obviously an issue," he said. 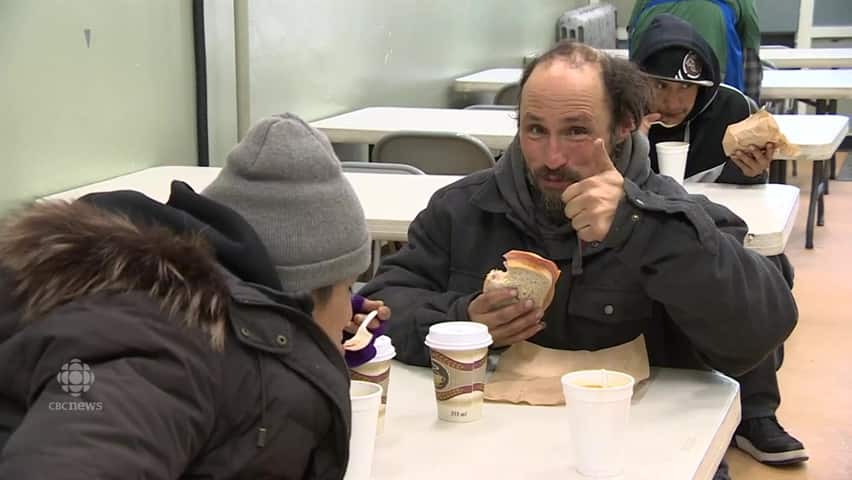 Charity donations in Manitoba have declined

2 years agoVideo
2:18
Smaller organizations say they're cash-strapped due to a drop in the number of Manitobans giving to charity in recent years. 2:18

With files from Information Radio and Nelly Gonzalez