A former Winnipegger who was once a shining star in Manitoba financial circles is among the hundreds of Canadians in a leaked database of offshore holdings, a revelation that has left his investment clients wondering if they'll ever get their money back.

Bruce Ransom's dad says son did nothing illegal, but investors want to know of any offshore stashes 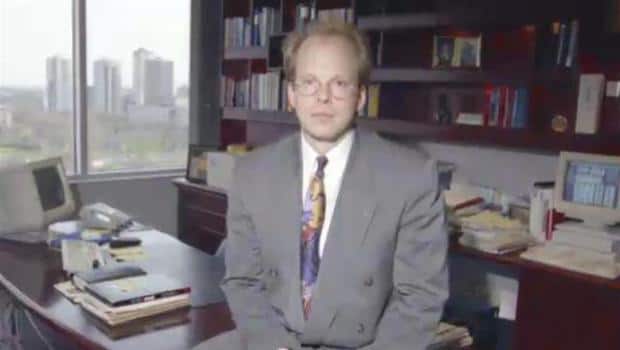 8 years ago
2:39
A former Winnipegger who was once a shining star in Manitoba financial circles is among the hundreds of Canadians in a leaked database of offshore holdings, a revelation that has left his investment clients wondering if they'll ever get their money back. 2:39

A former Winnipegger who was once a shining star in Manitoba financial circles is among the hundreds of Canadians in a leaked database of offshore holdings, a revelation that has left his investment clients wondering if they'll ever get their money back.

Bruce Ransom registered three companies in the British Virgin Islands about a decade ago — part of a long list of companies he has been involved with over the decades in various parts of the world.

But for people who have lost money in business dealings with Ransom in places like Winnipeg, Texas and New York, the revelation has them wondering if they can get their money back.

"I felt so foolish and terrible for falling for Bruce Ransom," said Robyn Deutsch-Sokol, a New York-area physician who made a $200,000 investment with Ransom in 2007, only to see the money vanish.

In an interview with CBC News from her home in New York, she said she can't help but wonder whether there's any money in the companies in the British Virgin Islands.

"If someone could find out exactly if there is any money in those accounts, the one that is in Bruce Ransom's name and I could sue him personally," Deutsch-Sokol said, explaining the stress that came to her and her family as a result of losing the investment.

The leaked records were obtained by the International Consortium of Investigative Journalists.

CBC News has not been able to contact Ransom, a relative of former Manitoba finance minister Brian Ransom, to ask him about the three companies.

But CBC News contacted his father, Colin Ransom, who said there’s no chance of investors finding money in the offshore companies.

Reached by phone at his home in British Columbia, Colin Ransom, a former RCMP officer, said of his son, "At no time did he put any money into any offshore companies."

Colin Ransom declined to indicate whether he has discussed the British Virgin Islands companies with Bruce. But he said his son has done nothing illegal and nothing wrong.

Over the years, Bruce Ransom has had addresses in Winnipeg, British Columbia and New York.

The three companies in the British Virgin Islands are:

Two of the companies list other people as directors, in addition to Ransom.

The leaked records, obtained by the International Consortium of Investigative Journalists, contain information spanning 30 years and 10 offshore tax havens around the world, most notably the British Virgin Islands in the Caribbean and the Cook Islands in the South Pacific. It is believed to be one of the largest ever leaks of financial data.

The files shed light on more than 120,000 offshore entities — including shell corporations and legal structures known as trusts — involving 130,000 people in over 170 countries.

In April, CBC News reported there were at least 450 Canadians in the records. Further investigation has turned up at least 100 more, and it is believed additional names will continue to be unearthed as the 2.5 million records are parsed.

Long before those companies were created, Ransom was off to a promising start to his career in Winnipeg by graduating with an honours degree in commerce from the University of Manitoba in 1988.  His family’s stock brokerage and corporate financing firm was known as Ransom Financial Corporation, and also involved his father and brother. The company was thriving and expanding in the 1980s and early ‘90s.

But Ransom ran afoul of Manitoba’s securities law and in 1994 had his trading licence suspended for five years. Documents provided by the Manitoba Securities Commission show the firm had been using clients’ securities for conducting its own business and was found to be not holding enough capital during a period in 1993.

After the sanction, the firm’s name changed from Ransom Financial Corporation to Sentinel Financial Group. But that wasn’t the end of Ransom’s trouble with securities regulators.

By 1996, the Manitoba Securities Commission was bringing more accusations against Ransom, this time connected to a company called Technology Capital Corporation.

West St. Paul resident Richard Burr was one of 21 investors in the company.

"Shocked, very shocked," Burr said, describing his reaction to the loss in a recent interview with CBC News.

Bruce Ransom was the "controlling mind" of the company. In a settlement he signed with the securities commission in June 1998, Ransom acknowledged he falsified documents that were submitted to the commission and misrepresented the truth in a letter sent to it.

The securities commission decided to extend Ransom’s five-year suspension for another five years, from 1999 to 2004.   When CBC News informed Burr of Ransom’s three companies in the British Virgin Islands, Burr wanted to know, "If any of my money is in it… or any of the other investors’ [money]?"

Around the same time the three Ransom companies were formed in the British Virgin Islands, Ransom was a founding officer of a U.S. company called Lothian Oil Inc. In 2006, he was chief executive officer of Lothian Oil as it was merging with United Heritage Corporation.

Within a year of that merger,  Deutsch-Sokol recalls, she was looking to invest some money from her parents’ estate. She remembers being introduced to Ransom in New York when he was seeking investors for a variety of companies.

"You know, he’s a nice man wearing a suit. He told me he’d been in finance for many years … He told me Lothian was a company that had purchased properties with oil wells," she said.

Deutsch-Sokol said she told Ransom she was wary of investing in something that might cause her to lose her money.

"And I figured, OK, I’ll take a chance.  Because how can an oil well not bring money in?" she said.

She agreed to invest $200,000 not in Lothian Oil, but in a related company, Lothian Cassidy LLC. On Jan. 8, 2007, Ransom signed a guarantee of Deutsch-Sokol’s investment principal for $200,000 plus six per cent annualized interest, backed up with shares in Lothian Oil as collateral.

"Bruce Ransom gave me an actual guarantee, a personal guarantee, and he told me I would never lose my initial investment," said Deutsch-Sokol. A few months later – in June 2007 – Lothian Oil filed for bankruptcy protection in Texas, triggering years of court battles in Texas and New York.  Deutsch-Sokol never saw her $200,000.

A separate $100,000 investment she made in a different company was returned to her, she said.

Deutsch-Sokol says she wonders whether any of her investment ever made it into an account associated with one of Ransom’s companies in the British Virgin Islands.

If you have more information on this story, or other investigative tips to pass on, please email the I-Team: iteam@cbc.ca or phone 204-788-3744.