Winnipeg police are warning the public about a potentially deadly drug that looks like a harmless piece of paper with a witch stamp on it.

Winnipeg police are warning the public about a potentially deadly drug that looks like a harmless piece of paper with a witch stamp on it.

Police seized six fentanyl blotters, each marked with a witch on a broom — a drug dealer's signature  — in a drug bust in Fort Rouge Friday and believe there are more blotters in the city.

"It's potentially lethal," Const. Rob Carver said Sunday, adding if the public comes into contact with a blotter, they should call 911 right away and not touch it. He said not even police and first responders would touch the blotters.

With Halloween coming on Tuesday, police are especially concerned the blotters could get into the wrong hands, maybe of a child, and be mistaken as just a piece of paper, he said.

"The concern of course is, for families out trick-or-treating, this wouldn't look dangerous. I have to tell you, I was shocked when I saw it."

Even just touching the blotters could be potentially lethal if they contain fentanyl or worse — carfentanil, Carver said.

Both drugs can be deadly if taken in the wrong dose — a dose the size of a grain of sand can kill.

"Anything like that is really scary to see or hear about and as parent, for sure, I'd be very concerned about that," said Max Paganelli of the warning from police while he and his young daughter took in a children's Halloween event in Winnipeg Sunday afternoon. "To see something like that floating around is very scary and not good at all."

Carver said police were introduced to blotters decades ago when they came loaded with LSD, a hallucinogenic drug.

The papers can either be eaten or placed on the tongue, though drug users can also extract it in other ways.

Petra Schulz, a co-founder of Moms Stop The Harm, said it's difficult for users to know the concentration of their drugs when they're packaged in blotters.

"Every time when there are changes in the format of how something is presented, people are just at a much greater risk of overdose," she said.

Schulz said this type of packaging makes the drugs more attractive to users, especially for people "who haven't tried it out."

"People should know they shouldn't try it alone," she said. "They should know how to recognize an overdose and have a naloxone kit."

Carver said he didn't know why someone would stamp the blotters with a witch, but said over the years, he's seen other blotters stamped with cartoon characters.

Ben Fry, CEO of Addictions Foundation Manitoba said  it's "quite concerning" to see fentanyl being packaged with Halloween imagery.

"Fentanyl is a risk at anytime," he said. "The fact that police discovered this is really important. We know that with each case like this, it has the tremendous potential of saving lives."

Police said, in addition to the six fentanyl blotters they found in Friday's drug bust, they also seized 11 grams of methamphetamine worth $1,100, numerous capsules with an unknown white powder, bear spray, various pieces of identification and about $1,800 cash.

Four people — a 25-year-old woman and three men, ages 27, 39 and 41 — were arrested and face a variety of charges in connection to the drug bust. 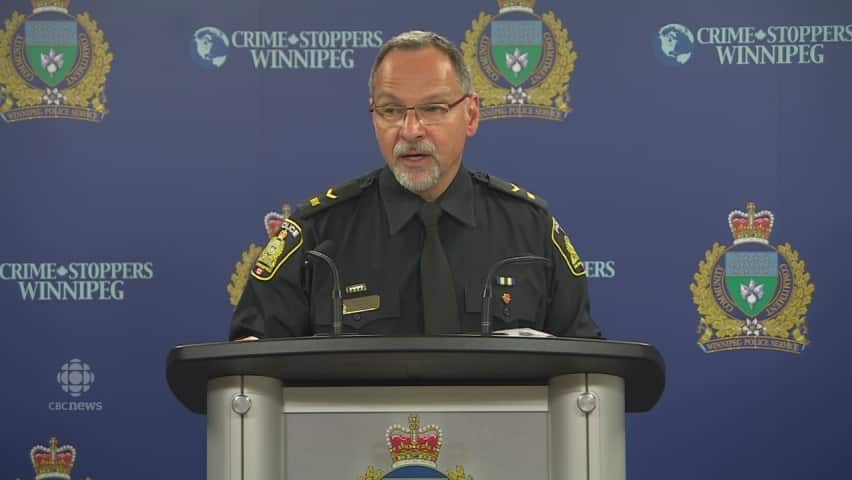 Police warn Halloween-stamped fentanyl blotters could be in Winnipeg

3 years ago
2:11
Winnipeg police are warning the public about a potentially deadly drug that looks like a harmless piece of paper with a witch stamp on it. 2:11

With files from Austin Grabish and Peggy Lam